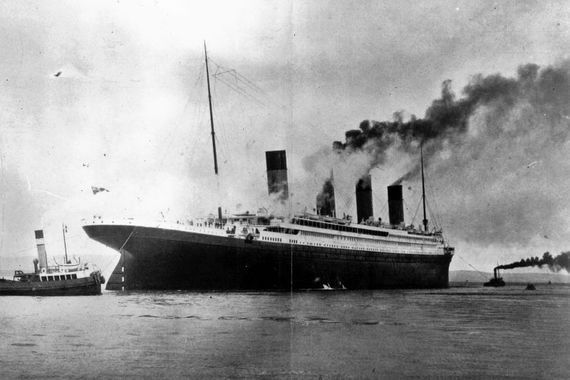 Encyclopedia Titanica shared a biography The Dundalk Democrat penned about William Clark after both of the disasters.

Clark was born in Greenore in Co Louth but later migrated to Liverpool in England. He wasn’t there long before he was compelled to chase down a life of adventure on the seas.

“Eventually he shipped aboard the huge Titanic and helped to keep her fires going on that first and last voyage, the awful end of which remains one of the most terrible incidents in our history. Clark went down in the ship when the mighty iceberg ripped her side open and hurled her to her doom.”

The paper detailed Clark’s miraculous survival from the Titanic:

“How he escaped he does not know. He was caught in the swirl of waters as the vessel plunged down - dragged down into the ocean depths with the crippled leviathan as she sank to her last resting place. Even then his abnormal luck did not desert him. He never thought to come up again, but the force of the boiler explosion lifted him and rushed him up to the surface. He struck out vigorously; was pulled aboard one of the boats, and came home to tell the tale.”

Despite the tragedy of the Titanic, Clark could not resist the lure of the sea. Just over two years later, he found himself on another liner, The Empress of Ireland, en route to Quebec from Clark’s adopted home of Liverpool.

On May 29, 1914, The Empress of Ireland was struck by the Norwegian collier SS Storstad at the mouth of a very foggy St. Lawrence River.

“Clark was on duty in the stokehold of the Empress when the collision came. The water came pouring in, driving the firemen higher and higher up the vessel, like rats trying to escape rising water in a well. His lifeboat station was No. 5, and somehow or other he got there, but he cannot remember how she was launched. His mind is a blank concerning some of those awful moments spent on the canting decks of the doomed liner."

“They had to crawl on hands and knees on the sloping hull in order to get the boat clear, and then their best chance of escape was to plunge into the water in the hope of being able to scramble aboard. Clark was drawn under several times before he got into the boat, and afterwards, he said, they were able to pull about sixty men into her.”

The Irish Times notes that The Empress of Ireland had learned an important lesson from The Titanic and ensured that there were enough lifeboats for all the people aboard. However, tragedy still struck when the ship went down extremely fast and claimed 1,012 lives of the 1,477 who were aboard.

Following his survival in the two disasters, Clark said The Titanic was worse “because there was more time to realise the full horror of the situation. On the Empress, death came more swiftly.”

After the sinking of The Empress of Ireland, Clark returned to Liverpool.

"If there is any luck on the sea, surely I have had it all," said Clark.

Do you know any stories of Irish people narrowly avoiding disaster? Share them in the comments.