The drama series is inspired by real people who lived through Ireland's Great Famine and is brought to life with the help of Irish actors narrating their stories. 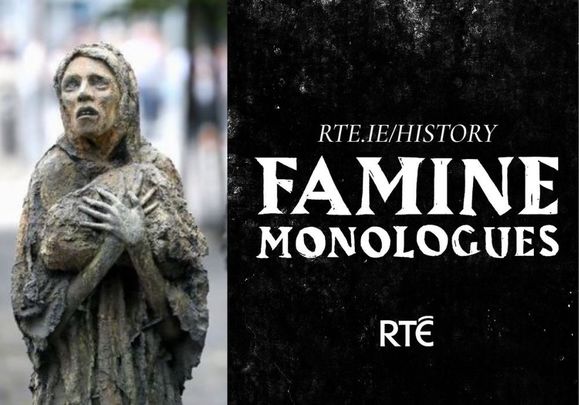 The suffering and stories of the Famine is brought to life in a new podcast called "Famine Monologues".

The six-part drama series is inspired by the real people who lived through Ireland's Great Hunger and is produced as part of RTÉ's Great Irish Famine project.

The project tells the story of the disaster in 1846, from the failure of British policy in Ireland to the generosity of the Choctaw Nation, from the roles played by women during the Famine to the effects of Irish emigration all over the world, from evictions to food riots.

"Famine Monologues" is written by author Anna Carey and performed by Irish actors with each episode taking listeners on a personal memory of everyday people, from tenant farmers, mothers, Quaker relief workers, the British officials, and of course the emigrants who witnessed the horrors.

The first episode "The Cottier Girl's Story" focuses on Catherine, played by Caitriona Ennis, a young woman from a cottier family (a peasant farmer) in the west of Ireland.

Cottiers were poor tenant farmers who were at the bottom of the social pyramid in 1840s Ireland. These were the people who suffered most from the Famine, but when we first meet Catherine, in the late summer of 1845, she has no idea of the horrors to come. Her life already is tough enough, and she heads to the local graveyard to pour her heart out to a friend who is buried there.

"The Doctor's Story" in episode two features a letter written by Dr. Daniel Donovan from Skibbereen to the southern reporter of a newspaper in Cork city, where he describes the screens of starvation and death in Skibbereen and the surrounding areas.

Listeners will hear Dr. Dan describe how helpless he feels as hundreds of starving, disease ridden and hopeless people flock to the workhouse in Skibbereen only to die due to a lack of medicine and proper care.

Actor Ray Scannell is the voice of Dr. Dan, as he was known locally, and recalls the images of the ghost-like people with ‘starvation stamped on every face’ as they struggle to survive.

Episode four titled "The Quaker's Story" features the voice of Anne Byrne narrating as an American “relief worker”, who describes her experiences while living in Ireland during the Famine.

"If you are reading this report of my experiences in Ireland you should know that if I discuss strange things it's because I saw them with my own eyes and now those things appear, even to myself, more like a dream than reality.

"What I saw in Ireland was not just out of the ordinary but out of the natural order of nature itself- it was simply wrong," explains the voice of Anne Byrne.

Speaking about working on "Famine Monologues", Anna Carey said, "I spent much of the last year working as an editor on The Great Irish Famine Project and reading so much about the Famine both broke my heart and opened my eyes to the sheer scale of the horrors experienced by those who lived through it.

"While people did starve to death during the Famine, many more died thanks to the diseases which spread rapidly among the desperate population."

You can listen to all six episodes of the "Famine Monologues" here.