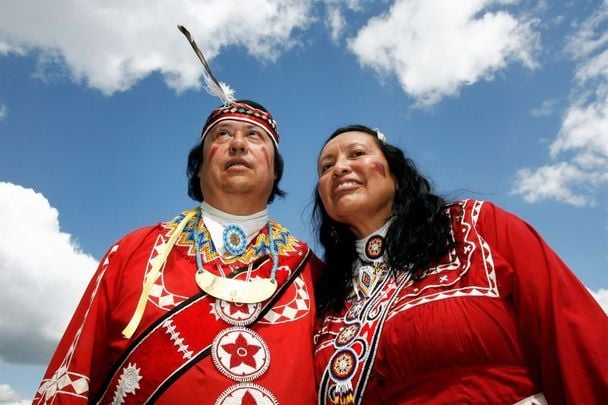 May 29, 2007: Choctaw Native Americans Gary and Dr. Janie Whitedeer visit with students at Gaelscoil Cholmcille in Santry to discuss their history and the Choctaw link with Ireland when their generosity in providing humanitarian relief during the Irish Potato Famine came decades before the red cross was created. RollingNews.ie

On March 23, 1847, the Native Americans of the Choctaw Nation donated $170 for Irish Famine relief, an incredible sum at the time worth in the tens of thousands of dollars today.

The Choctaw Nation had an incredible history of deprivation themselves, forced off their lands in 1831, and embarked on a 500-mile trek to Oklahoma called “The Trail of Tears.” Ironically the man who forced them off their lands was Andrew Jackson, the son of Irish immigrants.

On September 27, 1830, the Treaty of Dancing Rabbit Creek was signed. It represented one of the largest transfers of land that was signed between the U.S. Government and Native Americans without being instigated by warfare. By the treaty, the Choctaws signed away their remaining traditional homelands, opening them up for European-American settlement. The tribes were then sent on a forced march.

As historian Edward O’Donnell wrote, “Of the 21,000 Choctaws who started the journey, more than half perished from exposure, malnutrition, and disease. This despite the fact that during the War of 1812 the Choctaws had been allies of then-General Jackson in his campaign against the British in New Orleans."

After more than a decade of desperate times, leaders of the Choctaw Nation met on March 23, 1847, in eastern Oklahoma to raise money for "the relief of the starving poor in Ireland," Smithsonian Magazine reports.

It was the most extraordinary gift of all to famine relief in Ireland. The Choctaws sent the money at the height of the Famine, “Black 47,” when close to a million Irish were starving to death.

Thanks to the work of Irish activists such as Don Mullan and Choctaw leader Gary White Deer, the Choctaw gift has been recognized in Ireland.

In 1992, Irish commemoration leaders took part in the 500-mile trek from Oklahoma to Mississippi. The Choctaw made Ireland’s president Mary Robinson an honorary chief. They did the same for Don Mullan.

The gift is remembered in Ireland. The plaque on Dublin's Mansion House that honors the Choctaw contribution reads: "Their humanity calls us to remember the millions of human beings throughout our world today who die of hunger and hunger-related illness in a world of plenty."