Friendship in the Irish Famine, an under-told story of selflessness

The bond between the Native American Choctaw Nation and the Irish people stretches back to the Great Hunger. 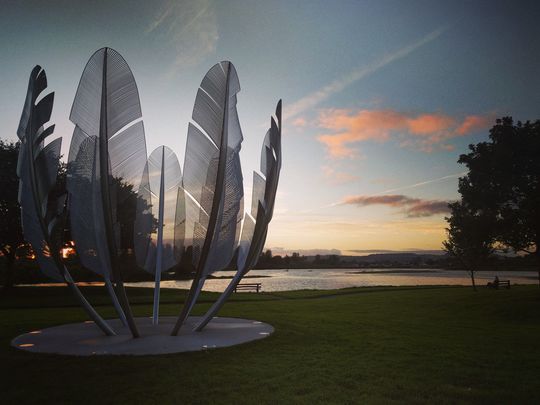 This coming March is American Heritage Month.  You can not have Irish American History without Irish History and even a little American History.  Now I haven't been to school for a year or so, but there was a definitive lack of Irish history.

I am assuming it is still the same because my daughter has yet to come home excited to tell me what she has learned from school about the homeland of her father and other family members.

Maybe I am wrong, but I think what I learned from my textbooks went something like this. There was a famine, potatoes were bad and Irish people died.  Then we moved onto the next unit.  The Irish may have been mentioned when we touched base on Immigration, but since I already knew how my family got here, I probably paid little attention.

There is so much more than our History textbooks taught us.  While I could write for days about historical facts and myths, I'm only going to give a few key facts.  The Great Famine, AKA The Great Hunger, or more commonly by Americans as the Irish Potatoe Famine began in 1845.  A fungus-like organism spread across Ireland ruining about half of the potato crops that year, and nearly three-quarters of the crops for the next seven years. (The same fungus had attacked American Potato crops from 1843-1844).

This had a catastrophic effect on the population.

First, it is important to understand that the potatoes were very important to the Irish, especially the poor.  Potatoes were nutritious and calorie-dense, making them very filling.  They were easy to grow in the Irish soil. Rural Poor were almost exclusively dependant on the potato for their diet.

Second, the rotten crops led hundreds of thousands of tenant farmers to be evicted due to not being able to pay their rent.  Sadly, people were starving to death, yet large quantities of food were being exported to Great Britain.  This is one reason many believe the Famine was a Genocide.  Before it was all over in 1852, roughly one million Irish men, women, and children died of starvation, malnutrition, and other related illnesses.  At least another million were forced to leave Ireland as refugees.  While all of this information is readily available for anyone who cares to know more about the tragedies of the Famine, it leads me to one of the most interesting facts I found.

1847 was the worst year of the famine and is commonly referred to as "Black 47".  Across the sea in America, the story of the Irish struggle touched many but for the people of the Choctaw Nation, it hit home.  In 1847, despite living with their own hardships and poverty the people of the Choctaw Tribe donated $170 (which would be approximately $5000 today) to relief efforts.  They were compelled to donate all they could after they had experienced so much poverty and loss along the Trail of Tears.  They felt a connection to the Irish people because both groups had suffered so much loss.  Such a selfless and generous act from a people who themselves had so little.  Quite the contrast to American History books that referred to Indigenous people as savages.

Let's fast forward to the 20th century. In 1990 members of the Choctaw Nation participated in a Hunger Walk held in County Mayo, Ireland.  In 1992, Irish delegates walked the 600-mile Trail of Tears to help raise money for World Hunger.  In 1995, then Irish President Mary Robinson visited the Choctaw Nation to thank them for their generosity and she was made an Honorary Chief.  Now we get to my favorite part!!  In 2017 the Kindred Spirits monument was dedicated and unveiled by Gary Batton, Chief of Choctaw Nation, Irish Delegates, and a large delegation from Choctaw Nation.  The monument consists of nine, 20-foot tall stainless steel Eagle feathers (no two feathers are alike).  They stand in a circle to form a bowl shape; symbolizing a bowl of food.  This beautiful sculpture is located in Balick Park In Midleton, County Cork, Ireland.

Choctaw Chief Gary Batton said, "The Irish and Choctaw are bonded by the difficulties they have endured and the resilience they have shown."

173 years ago, a small act of kindness forged an unlikely but beautiful friendship.  If these two cultures can come together in solidarity, why can't the rest of us?  I guess there is so much history around the world that directly impacted the United States, meaning not everything is deemed History class worthy.  one would think that the relationship between the first residents of our land and one of the largest diaspora groups would be worth teaching.

Regardless of your heritage, you are probably not accurately represented in American History textbooks.  The stories are never told fully or accurately.  Therefore it is up to us to teach the next generation where they came from, so they have a better understanding of where they are going and how they got there.