Waylon Gary White Deer of the Choctaw First Nation led the 170th-anniversary walk of the Great Famine and 1848 Rising in Ballingarry, Co. Tipperary. He noted that the 170 years paralleled the 170 dollars his people sent to the Irish in their hour of need. 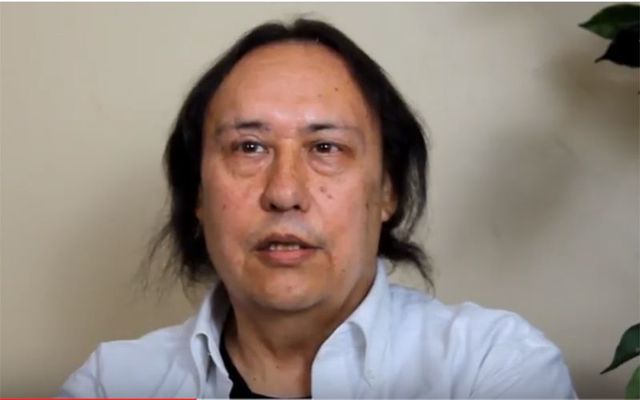 Waylon Gary White Deer of the Choctaw First Nation was the guest of honor at this year’s Famine 1848 Walk in Ballingarry, Co Tipperary. YouTube/wonderfulifeprods

The Choctaw Nation’s Irish potato famine relief and the way they helped Ireland during the Great Hunger was remembered once again at the Famine 1848 Walk in Tipperary.

A member of the Choctaw Nation has compared the plight of the Irish as they took to the roads in search of food and shelter during the Great Hunger to the heart-breaking “Trail of Tears” which his people were forced to undertake under the orders of Irish-American President Andrew Jackson.

Waylon Gary White Deer of the Choctaw First Nation, who recently made his new home in Co Donegal, was the guest of honor at this year’s Famine 1848 Walk in Ballingarry, Co Tipperary, commemorating the enormous act of kindness from the Choctaw Nation people when they raised funds for the starving and dying Irish despite their own pain and suffering.

Read more: Celebrating the Choctaw Nation and their kindness to the Irish

We meet Choctaw artist & author Waylon Gary White Deer in County Donegal to hear what life is like for him & to hear about the traditions he holds dear on #RTENationwide Wednesday 7th March @RTEOne 7pm & RTE+1 8pm @rte RT pic.twitter.com/pGbOpUZBdJ

“The Irish-Choctaw famine link transcends both the Irish and Choctaw peoples and speaks to a common humanity,” White Deer said during his moving address at the annual walk.

“This is how we regard one another when we are following our better angels.

“The graciousness of the people who took part in the Walk will long stay with me,” he added of the event.

In what is one of the most surprising and generous contributions to Irish famine relief, a group of Choctaw people gathered in Skullyville, Oklahoma, on March 23, 1847, to collect funds for the starving Irish people at the height of the Great Hunger. They passed the money collected onto a U.S. famine relief organization, in an extraordinary act of kindness from those who already had so little.

In his address, White Deer noted how there was a beautiful parallel between him attending the 170th anniversary of the Famine Rising of 1848 when $170 was the amount donated to the Irish by the Choctaw First Nation.

Just 16 years prior to this collection, the Choctaws were among one of the “civilized tribes,” who were forced off their land by President Andrew Jackson (the son of Irish immigrants) and forced to complete a 500-mile trek to Oklahoma that would become known as the "Trail of Tears."

Despite the allegiance shown by the Choctaws to General Jackson during the War of 1812, the Treaty of Dancing Rabbit Creek signed on September 27, 1830, resulted in the Choctaws signing away the remainder of their traditional homelands in Alabama, Mississippi and Florida and undertaking a forced march off the land.

Over half the 21,000 Choctaws forced on this march perished on the trail due to malnutrition, disease, and exposure. The winter the Choctaws spent on the Trail of Tears was one of the coldest on record and even those who survived the journey to Oklahoma faced further hardships in creating new communities for themselves, along with new homes, schools, and churches.

The Tipperary walk takes place every year to remember those who suffered and died during the Irish famine and the Famine Rising in 1848. This year, the walkers battled through rain and hail to complete the journey to the national heritage site, the Famine Warehouse.

This is not the first time that the Choctaw nation has been honored in Ireland. In 1990, Choctaw leaders traveled to Mayo, Ireland to take part in a reenactment of the desperate walk undertaken by locals to their landlord in 1848. The gesture was returned in 1992 when Irish commemoration leaders took part in a 500-mile trek from Oklahoma to Mississippi. Former Irish President, Mary Robinson, has also been named an honorary Choctaw chief.

A plaque acknowledging the contribution of the Choctaw people to the one million Irish people starving during Black ‘47 , the worst year of the famine, is mounted in Dublin’s Mansion House and reads, "Their humanity calls us to remember the millions of human beings throughout our world today who die of hunger and hunger-related illness in a world of plenty."

There is a more recent memorial erected in Co Cork also. In 2015, the sculpture of nine eagle feathers was installed in Bailic Park in Midleton.

Should more be done to honor the Choctaw Nation in Ireland? Let us know what you think in the comments section, below.