Was the real King Arthur Irish?

How could it be that the source for a British legend be Irish or at least of Irish origin, never mind real? 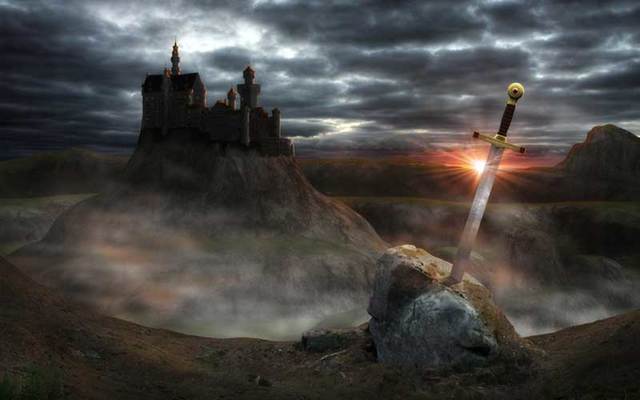 No doubt one of the world's most famous legends is that of King Arthur who ruled from his mythical capital of Camelot along with his magician, Merlin, and his famous knights of the round table.

But how could it be that the source for a British legend be Irish or at least of Irish origin, never mind real?

It was the English scribe, Geoffrey of Monmouth in the year, 1135 from which we get much of the stories of King Arthur. However, there were writings that mentioned, although in less detail, Arthur, dating back to the Seventh and Eighth Centuries.

These earliest writings tell of Arthur being a Christian warlord that fought against the Saxon hoards that overwhelmed Britain during the Fifth and Sixth Centuries.

While some have tried to claim that the real Arthur may have been a Roman British warlord, the legends of Arthur, themselves may give us a big clue as to who the man really might have been.

One of the most popular stories of Arthur is about how he became king by drawing a sword from a stone.

The story goes that his father, the previous king, Uther Pendragon, before his death, drove his sword into a large rock, declaring that only his rightful heir would be able to withdraw the sword. Several years later, along comes Arthur who does just that.

The sword, in fact, is the Stone of Destiny upon which the High Kings of Ireland were crowned on.

The ceremony was the symbolic marriage between the king and the goddess of sovereignty.

The sword was male (the Irish word for sword can also be a nickname for a male organ) and the stone was female.  The story represents the consummation of the marriage between the king and the goddess.

The Scots, particularly the Highlanders, were originally Irish and settled in that part of Britain back as early as the First Century. However, by the Sixth Century, these settlers who had brought their culture and traditions with them, wished to be independent of the kings of Ireland. And so it was, in the year, 574 that Aiden Mac Gabhrain was crowned the first king of the Scots by the Irish cleric, Saint Colm Cille.

Camlen could be from the Gaelic "cam Allen," meaning bend on the River Allen. (Allen is a large river in Scotland.)

Arthur ruled from a place known as Camlough (Bend on the Lake) which sounds rather like Camelot, King Arthur's capital.

Furthermore, King Arthur's final resting place is said to be Avalon.  Arthur, son of Aiden Mac Gabhrain is said to be buried at the river Allen. The Gaelic word for River Allen is Abhainn Allen, similar to Avalon in pronunciation.

The Scots claimed that the Stone of Scone upon which their kings were crowned was in fact, the Stone of Destiny, itself which they claim, they stole from Ireland.

It is important to mention that Irish kings and at first, the kings of Scotland were elected and not passed down from father to son.

It could have been, that Aiden hoped that his son Arthur would in time, replace him.  However, Arthur was killed during Aiden's reign.

It is possible that Arthur became a figurehead for Aiden Mac Gabhrain's faction which may have lost power, shortly after Aiden's death.

To enforce, they were the rightful rulers of Scotland, they would have wound stories of great Irish High Kings and heroes around Arthur.

The story of King Arthur and the Holy Grail is similar to that of the Irish king, Cormac Mac Airt and the Cup of Truth, Sir Gwen, and the Green Knight is similar to the encounter the Irish hero Cuchullain had with a green warrior and while King Arthur's wife, Guinevere had affair with one of his knights, Lancelot, the Irish hero Fionn Mac Cumhaill's wife, Grainne cheated on him with one of his warriors, Diarmuid.

Furthermore, the similarities don't stop there.

While King Arthur and his knights were said to lie, sleeping in a hidden location, ready to awaken and defend Britain at some point in the future, the Irish hero, Fionn Mac Cumhaill, and his warriors are said to be sleeping somewhere in a cave, ready to rise up and defend Ireland when it faced its greatest danger.

The story of Arthur sleeping, waiting to return could be a metaphor for when Aiden Mac Gabhrain's faction would return to power, to rule Scotland once more.

It is worth mentioning, that the very man who crowned Arthur's father Aiden Mac Gabhrain, the first king of Scotland, Saint Colm Cille, had a forceful personality, was a mentor figure, and was said to be able to foretell the future, and command great supernatural power.  Many historians venture that Saint Colm Cille, at least in part, helped influence the character of Merlin, King Arthur's magician.

There have been many claims as to the mystery behind the myths of King Arthur but the fact, that he may have been a man of Irish origin is very likely and the Arthurian tales owe a lot more to Irish legend than in fact, even the folklore of Britain.