Was King Arthur a real person? One British archaeologist insists the legendary monarch was a fictitious “Celtic superhero” based on five real men. 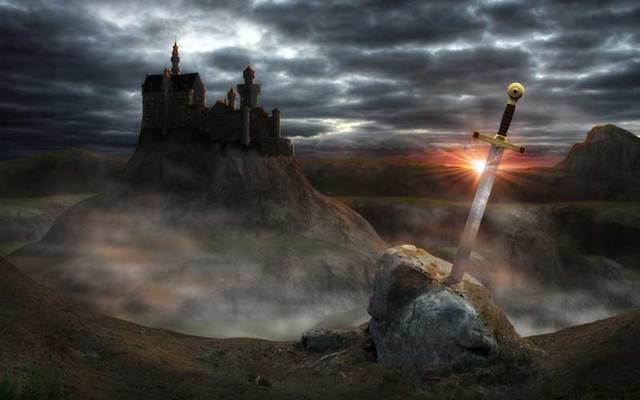 Was King Arthur a real person? One British archaeologist insists the legendary monarch was a fictitious “Celtic superhero” based on five real men.

Bournemouth University archaeologist Miles Russell has claimed he has evidence to prove that the legendary king who rose to the British throne by pulling the Excalibur sword out of the stone and ruled with the help of the Knights of the Round Table never existed at all and is a fictional creation of five real-life warlords, Ancient-Origins.Net reports.

He says he came to his conclusion after studying A History of the Kings of Britain, written by Geoffrey of Monmouth in 1136, and other medieval texts.

“Geoffrey’s book itself derives from a series of myths, stories and bardic praise poems that go back to the first century BC, at a time just before Britain became part of the Roman Empire,” Dr. Russell stated in a press release .

“By studying the text with a forensic eye, isolating individual tales and characters, it is possible to identify where the story of King Arthur first came from.

“When you start to look at King Arthur in detail you realise that he is an amalgam of at least five separate characters – he never existed as an independent person at all.”

He says that the creation of the Arthur legend was primarily based on Ambrosius Aurelianus, a leader of the Roman-British population who lived in the late 400s. The legend was also greatly influenced by Magnus Maximus, a Roman general who was alive in the 380s.

Other parts of the legend were expanded by the histories of Roman emperor Constantine the Great and the prehistoric warlords Arvirargus and Cassivellaunus.

“Once you take all these elements of his story away, there’s actually nothing left for Arthur,” said Dr. Russell.

“He’s an echo of all these other individuals – what Geoffrey of Monmouth did was create a Celtic superhero for his times, a character for the Britons to celebrate, taken from all the best bits of those individuals who lived before."

Dr Russell, who is the author of Arthur and the Kings of Britain: the Historical Truths Behind the Myths, added that the King Arthur legend has changed and evolved dramatically over the centuries.

“The tale of Arthur as it’s originally presented is one whereby he takes an army to Europe in order to forge a great empire,” he said.

“It’s a story of conquest and aggression – in fact, if anything, Arthur as he appears in this original text is a deeply unpleasant and unsympathetic character.

Read More: Top Irish legends and myths to tell your kids at storytime

“The Arthur that we’re familiar with today has been built on by subsequent writers who added Camelot, the Round Table, the Holy Grail and the love triangle with Guinevere and Lancelot. All of these things are bolt-ons to the original story, making Arthur more rounded and ultimately more likeable.

“That’s the magic of King Arthur - every generation reinvents him and adds something new to the mix and you have to strip all that away and get back to the original account to understand who he really was.”