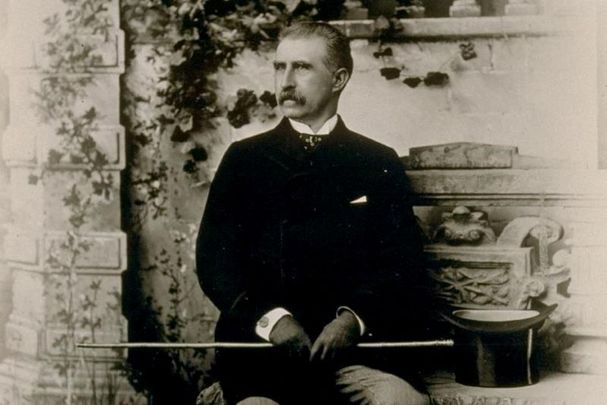 A portrait of John Mackay, circa 1890. Public Domain

What are the odds that the richest ever Irishman would be born in a Dublin one-room hovel with a pig, his parents, and a sister for company?

That was the way life kicked off for John Mackay, who died in 1902 worth $1 billion, the equivalent of $80 billion today. His story is told in "The Bonanza King: John Mackay and the Battle over the Greatest Riches in the American West," authored by Gregory Crouch.

Ironically, the fact that we know so little about him stems from the fact that Mackay was deeply beloved by everyone who met him at a time when the robber barons like Jay Gould and Charles Crocker and their nefarious deeds were much more in the headlines.

Mackay was famous for fair dealings with his employees, and gave generously, especially to the charities of the Roman Catholic Church.

Mackay always felt there was great benefit and status in holding down a job. He had a bad stutter all his life which left him shy and reserved.

The family immigrated to America in 1840 and lived in the notorious Five Points slum in New York.  Things got worse when Mackay’s father died, leaving him the sole breadwinner for his mother and young sister. He became a newsboy and later apprenticed to a ship’s carpenter and made enough to feed the family.

In 1848 came news of the California gold rush, but Mackay could not leave his family until his sister was able to work.

By 1851 that came about and Mackay, at the age of 19, took a jaunt across America to the town of Downieville, California where gold fever had struck.

“Gold mining was hard, dirty, and repetitive, like digging an endless ditch,” Crouch writes. Success or failure depended on life’s luck of the draw. “A man could easily dig an entire season…and finish poorer than when he started...,” he wrote.

Mackay looked like one of the also-rans. After seven years of backbreaking digging, panning, and digging again, he had less money than what he arrived with.

In 1859 came the breakthrough, when Mackay and a fellow Irishman, both flat broke, walked 100 miles to the Sierra Nevadas where there was word of a big gold and silver find.

Mackay did not seek to find gold for himself but rather worked for one of the many bigger consortiums that were tearing up the mountain. His plan was to make enough money and gain expertise to start out on his own.

He did so in 1865, and his luck immediately turned when he bought a share in the Kentuck mine which yielded $1.6 million in gold to the partners. At 35, Mackay was a rich man.

In 1875 he and a group of Irish friends -- James C. Flood, James G. Fair, and William S. O'Brien -- bought a claim 1,000 feet below the Nevada desert and struck the biggest silver deposit ever found anywhere in the world. It was worth $545 billion when it eventually petered out. It was called “The Big Bonanza.”

Success changed Mackay little.  He still drove a one pony trap, he preferred corned beef and cabbage, and a big night out was to see a play.

He and his partners started Hibernia Bank which insisted on a fair deal for miners in terms of interest rates. He built a railroad line over the mountains and brought fresh water to Nevada.

Mackay took on the hated robber baron Jay Gould who charged extortionate rates to use his underwater cable to Ireland from the U.S.

He and his wife traveled became enchanted with Paris where they built a huge mansion. Mackay died of heart failure in London in 1902.

In Virginia City, the mansion where Mackay lived is perfectly preserved like his memory in this book. Buy it.