Despite no exact knowledge of his own Irish roots, the Beatles star, who would have celebrated his birthday today, was a strong supporter of a 32-county United Ireland. John Lennon: IRA songs as a solo artist showed his support for a United Ireland. John Lennon's birthday is celebrated today, October 9. He would have been 82.

Although three-quarters of The Beatles lineup had Irish roots, throughout the years of Beatlemania, John Lennon knew little of his connection to Ireland, other than the DNA link inherited through his estranged father and the family he never knew.

It was in the post-Beatles days, however, that Lennon (or Ó Leannáin as we should call him) became one of the most famous voices calling for a United Ireland and for an end to English presence in Northern Ireland.

As today marks the icon's birthday, what better time to celebrate the Beatle's Irish links: His shamrock-green-laced family tree, his full, unadulterated support for a United Ireland, and his attempts to protest against the Troubles violence through his music as a solo artist, all while striving to reconnect with the land his family emigrated from through the island he owned off the coast of Co. Mayo, the island on which he had hoped to spend the last of his days in perfect peace and beauty.

According to Rare Irish Stuff, such was the revived interest Lennon had in the land of his forefathers that while reading "Irish Families, Their Names, Arms, and Origins" by Edward MacLysaght in 1974, he corrected MacLysaght’s claim that “No person of the name of Lennon has distinguished himself in the political, military, or cultural life of Ireland…” by scrawling “Oh yeh? John Lennon!” in the margin of his copy. By the time of its next reprint in 1982, two years after Lennon’s death, this grievous error had been corrected.

Tales differ on the exact family connection that binds the superstar Beatle to our island. Both he and his two parents were Liverpudlian born and bred but as his father broke ties when Lennon was five years old, John Lennon and his fans were never to properly know exactly the Irish connection entered his family tree.

His father, Alfred Lennon, was a merchant seaman and spent much time away at sea, returning when John was four years old to offer to look after him but was refused by his wife—John’s mother—Julia. After Alfred made a further attempt to emigrate to New Zealand with his son, a young John chose to stay with his mother and would not reconnect with his father for two decades, leaving his Irish roots unknown.

It is believed Alfred himself was sent to an orphanage at a young age, making his ancestry even trickier to pin down.

Some sources claim Alfred’s father John (Jack, or sometimes even James) Lennon was born in Dublin in 1858, moving to Liverpool as a young man and marrying an Irish woman named Mary Maguire (otherwise known as Polly Maguire). Their family is believed to have been orphaned early, however, and raised in Liverpool orphanages. Mary gave birth to 15 children in total, eight of who died, and when his father died, Alfred was forced to leave his mother who could no longer look after them all by herself.

Others have it that Alfred’s father was a bookmaker born in Liverpool to parents James and Jane Lennon from Co. Down. This version of events states that Jack Lennon went on to have two marriages, first to a Margaret Crowley and secondly to Mary Maguire. James and Jane are said to have immigrated around the time of the Great Hunger, anglicizing their name from Ó Leannáin as he went.

No matter the exact passage to England for the Ó Leannáin family, it was from this Irish stock that John is believed to have found most of the singing talent, coming from a long line of crooners, and as the musical star found his connection to Ireland growing deeper and deeper, so did the vocal claims of his own Irishness grow louder and louder.

In a 2012 interview, Yoko Ono spoke of her husband's love for Ireland, claiming: "My husband was 100% Irish. That's what he used to say. Ireland was sort of like an auntie or a mother that he wanted to show me.

“When he was born, his mother was English and his father was Irish and he didn’t have too much opportunity to see his father, so he had this yearning for being Irish. In a way, it was sad because he was always talking about that." 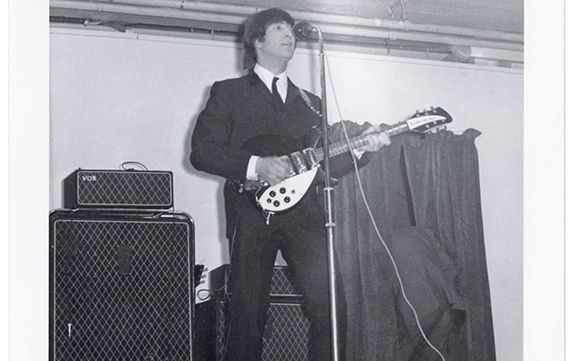 As he got older, John’s interest in the cause of Irish unity also grew, establishing his strong stance in favor of England leaving Ireland completely in his post-Beatles music. Despite being remembered as an international purveyor of peace, when it came to Ireland, Lennon took a different view.

The following year, his 1972 solo LP, “Some Time In New York City” offered up two songs about Ireland: “Sunday Bloody Sunday” and “The Luck of the Irish”. Both were banned by the BBC and acted as undiluted protest anthems against the current state of affairs in Northern Ireland.

In “Luck of the Irish” Lennon sang:

“A thousand years of torture and hunger,

Drove the people away from their land,

A land full of beauty and wonder,

Was raped by the British brigands!”

“Sunday Bloody Sunday” referred specifically to the Bogside Massacre of January 1972 , when 13 unarmed civilians were shot down by British paratroopers during a peaceful protest.

“You Anglo pigs and Scotties,

Sent to colonize the North,

You wave your bloody Union Jack,

And you know what it’s worth!

How dare you hold to ransom,

A people proud and free,

Keep Ireland for the Irish!

Put England back to sea!”

His strong words do seem strange, however, given that his own mother Julia worked as an usherette in the Trocadero cinema in Liverpool when it was bombed with tear gas by the IRA in 1939, luckily incurring no loss of life.

Such was the connection Lennon felt to his homeland that he had hoped to make a piece of it a place for him and Yoko Ono to retire, purchasing Dorinish Island, still now known as Beatle Island, for £1,700 in 1967. He said in a 1971 interview: “I told Yoko that’s where we’re going to retire, and I took her to Ireland. We went around Ireland a bit and we had a sort of second honeymoon there. So I was completely involved in Ireland.”

By the time of his death, the couple did have planning permission to build a home on the island but unfortunately, had only managed to make the journey there once due to their busy lives in New York City. Four years later, Yoko Ono sold on the island for £30,000 donating the price to an Irish orphanage.

#Onthisday in 1980 John Lennon was tragically killed. Relive the story of how Lennon came to own Dorinish Island https://t.co/7W5NGAyEkF pic.twitter.com/nGYDdCCgDJ

Lennon may tragically have lost his dream of an Irish retirement, the dream that so many others have shared with him, as they have so many of his other dreams for the world, but he did leave behind a strong record of his Irish legacy, naming his second son Seán, the Irish-language version of his own name.

And if that wasn’t enough, one lucky Irish couple still hold onto his Ivor Novello award for “She’s Leaving Home” after gatecrashing their way into his presence. Irish fans Richard and Maureen Hall were told by Lennon that the award was simply gathering dust with him and would be better off in their hands when they brazenly found themselves in front of him.