On This Day: John F. Kennedy won the US Presidential Election in 1960

John F. Kennedy was the descendant of an Irish Famine survivor and America’s first Catholic president. 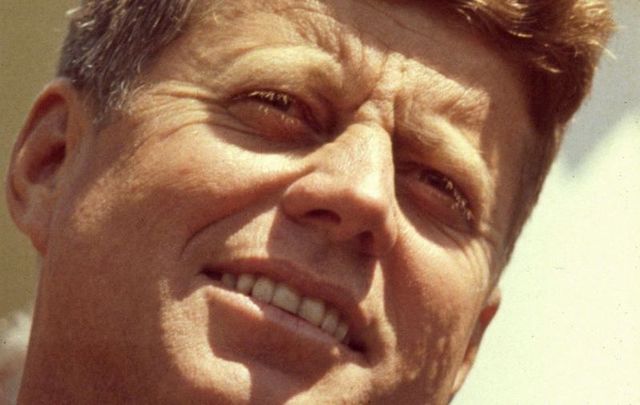 On November 9, 1960, John F. Kennedy was named the winner of the US Presidential election and became the first-ever Irish American Catholic President of the United States.

Editor’s Note: Americans went to the polls on November 8, 1960 and the following day, John F. Kennedy emerged as the new President of the United States. Today, we reflect on the election of the 35th President of the USA, and his 'Irish mafia' in the White House.

When Barack Obama moved into the White House, many felt a sense of optimism despite the vast challenges facing America. Such feelings, naturally, recalled January of 1961 when, on a bright, frozen Washington morning, John Fitzgerald Kennedy was inaugurated, declaring that “the torch has been passed to a new generation – born in this century, tempered by war, disciplined by a hard and bitter peace, proud of our ancient heritage.”

It wasn’t just Kennedy’s speech, youth and good looks that gave people a reason to feel optimistic. It was also the undeniable history of the occasion. Kennedy was the descendant of an Irish Famine survivor and America’s first Catholic president.

So, awareness of this “ancient heritage” was inevitably going to trickle down and change the kinds of people at the center of American power.

As a trailblazer himself, Kennedy opened doors for those who might otherwise not have made it to the corridors of power. Specifically, Irish American Catholics played a central role in the early 1960s Washington. Who were these movers and shakers who were so close to Kennedy, so Hibernian in background and temperament that they came to be called “the Irish mafia”?

Of course, there had been Irish powerbrokers in Washington before Kennedy. Both James Farley and Thomas (the Cork) Corcoran were close aides to Franklin Roosevelt, while Mike Mansfield (the son of Irish immigrants) was elected to the Senate the same year JFK became president. However, the Irish – even when they achieved great power in New York, Boston and Chicago – generally ruled over their native cities, rather than Washington. All that changed with JFK’s election in 1960.

The most prominent Irish Americans surrounding Kennedy were David Francis Powers, Dick Donahue, Kenneth O’Donnell, and Lawrence O’Brien, a quartet of political wizards who were aiding JFK long before he ran for president. When you also consider that JFK’s brother, Bobby, was one of his closest aides (and his Attorney General), as well as the informal advice often given to JFK by his father, Joe Sr., you see why it was whispered that Kennedy presided over an “Irish Mafia” – or “Murphia,” as Jackie Kennedy once called them. (Kennedy confidant and biographer Theodore Sorensen once commented that despite the jovial nature of the term, the group actually disliked the term “Irish Mafia,” at least initially.)

David Powers was the son of Irish immigrants from Cork who settled in Charleston, Massachusetts. Always humble, Powers once said he was merely “a newsboy who met a president,” referring to a childhood job. Powers – “Boston to his fingertips,” according to the Encyclopedia of the Irish in America – first worked for Kennedy in 1946, when JFK ran for Congress.

Powers “was recruited to add a sense of working-class realism to what the Harvard-educated Kennedy feared might be perceived as his own lace-curtain credentials as a political candidate,” the Washington Post once noted. Powers himself once said: “While Jack Kennedy was a completely new type of Irish politician himself, having come from such a different background, he was, at the bottom, very Irish and he could never hear enough of the old Irish stories.”

Meanwhile, in recent years, Kenny O’Donnell’s legacy has grown in prominence, thanks in part to the Hollywood film Thirteen Days. Based on the Cuban Missile Crisis, the film’s star was Kevin Costner who portrayed (you guessed it) Kenny O’Donnell, who tries to mediate between the “hawks” and “doves” in Kennedy’s inner circle. (For what it’s worth, Defense Secretary Bob McNamara later commented that O’Donnell’s role in the movie was “totally fictional.”)

O’Donnell also was from Massachusetts (Worcester). His father was a legendary Holy Cross football coach. Thanks to the GI Bill, O’Donnell attended Harvard where he met Bobby Kennedy, who became his roommate. O’Donnell and the Kennedys “couldn’t gain acceptance into any of the elite clubs because of (their) religion,” Thomas Maier writes in his excellent book The Kennedys: America’s Emerald Kings.

Finally, there’s Lawrence O’Brien, whose parents came from Cork. They were a deeply political family. Young Lawrence proudly recalled shaking the hand of Al Smith, when, in 1928, Smith was the first Catholic to run for president as a major party candidate. In 1952, O’Brien served as director for JFK’s Senate run and was seen as so integral to Kennedy’s victory, that he was a natural to join JFK when he set his eyes on The White House.

The 1960 US Presidential Election

The big question during the 1960 presidential race was whether Americans would elect a Catholic for president. If Kennedy’s Irish inner circle didn’t know this initially, they learned it quickly at a meeting in West Virginia. O’Brien, O’Donnell, and Bobby Kennedy asked local voters to discuss any problems the Kennedys might face. A man stood up and said: “There’s only one problem. He’s a Catholic. That’s our goddamned problem.” O’Donnell later recalled: “(RFK) seemed to be in a state of shock. His face was pale as ashes.”

Of course, the campaign overcame this issue and won – in no small part thanks to the campaign’s Irish advisers. O’Brien was even put on the cover of Time magazine in September of 1961. “To the Kennedy team, O’Brien was and is more than a skillful political organizer. He has the experience and understanding to serve as a bridge between the Democratic Old Guard and the New Frontier,” the magazine noted.

“The bright, eager young men around Jack Kennedy have always baffled and often offended the (old machine) Skeffingtons of Massachusetts; but Larry O’Brien can talk to politicians in their own language and win them over,” Time said.

Bobby Kennedy added: “He was the essential transition man for us with the Old Guard.”

O’Donnell, meanwhile, more or less controlled access to Kennedy, whose press secretary Pierre Salinger once dubbed O’Donnell the most powerful man on Kennedy’s staff. Another observer said O’Donnell – nicknamed “the Cobra” for the tight grip he had on access to the president – was Kennedy’s “political right hand, troubleshooter, expediter and devil’s advocate.”

Thirteen Days might have blurred the line between fact and fiction, but Kennedy’s Irish advisers did have a front-row seat for the Cuban Missile Crisis in October 1962.

In one conversation with Powers, JFK pondered the vast questions of life and death.“Dave, we have had a full life,” Kennedy said, adding that he feared most for the lives of his children. On the brighter side of the Kennedy years, there was his famous trip to Ireland. 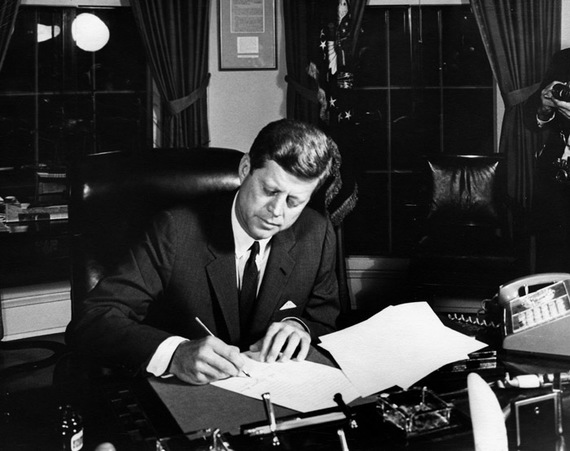 Kennedy signing the order for the blockade of Cuba.

Interestingly, according to Maier’s book, Kenneth O’Donnell was not exactly sentimental.“It would be a waste of time,” he said, noting that the Cold War remained a demanding issue and that civil rights also needed to be dealt with. “You’ve got all the Irish votes in this country that you’ll ever get. If you go to Ireland, people will say it’s just a pleasure trip.”

JFK responded: “Kenny, let me remind you of something. I am the President of the United States, not you. When I say I want to go to Ireland, it means that I’m going to Ireland. Make the arrangements.”

Sadly, having been there for the historic moments of JFK’s brief presidency, the Irish Mafia was also there when it ended. Powers was actually in the car behind Kennedy when he was assassinated in Dallas on November 22, 1963. Powers even helped remove Kennedy’s body from the car. One observer, in Maier’s book, noted that the diverse cultural groups in Kennedy’s inner circle reacted to his death in different ways. “The Irish were having a wake, the Protestants were at a funeral, and the Jews were weeping and carrying on.”

Perhaps it’s not surprising that as conspiracies have come to surround JFK’s death, the Irish Americans are said to have played a role in that, too. 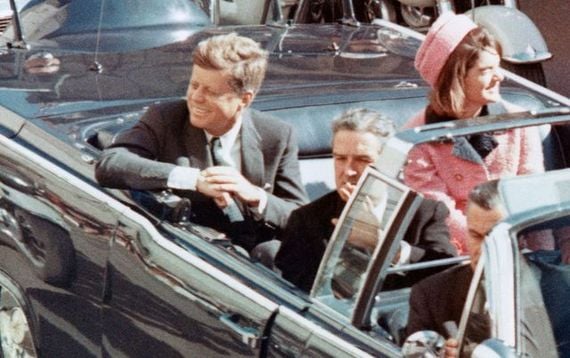 After Kennedy was declared dead, doctors reportedly wanted to perform an autopsy in Texas. It has been said, however, that O’Donnell forcefully persuaded doctors to allow the autopsy to instead take place in Washington, raising questions about the accuracy of the procedure. Either way, O’Donnell took the death of Jack – and, in 1968, Bobby – very hard. He fell under the sway of alcohol and was just 54 when he died in 1977. His daughter Helen O’Donnell later wrote a book entitled A Common Good: The Friendship of Robert F. Kennedy and Kenneth P. O’Donnell.

Powers, meanwhile, became a driving force behind the JFK Library and Museum in Boston. He served as curator when it opened in 1979, and retired in 1994, before dying at the age of 85 in 1998. Finally, O’Brien became chairman of the Democratic National Committee in 1968 and later was targeted for investigation by Richard Nixon. O’Brien later left politics and became commissioner of the National Basketball Association, before dying in 1990 at the age of 73.

“The Irish,” JFK once said to O’Donnell, “do seem to have an art for government.” The president then paused, considered his company, and added: “Perhaps we are both prejudiced.”

*This article was originally published in our sister publication Irish America Magazine, in the February / March 2009 issue.