Just 18 days before his assassination John F Kennedy called on the nation to be grateful for what binds them and to build towards a peaceful society. 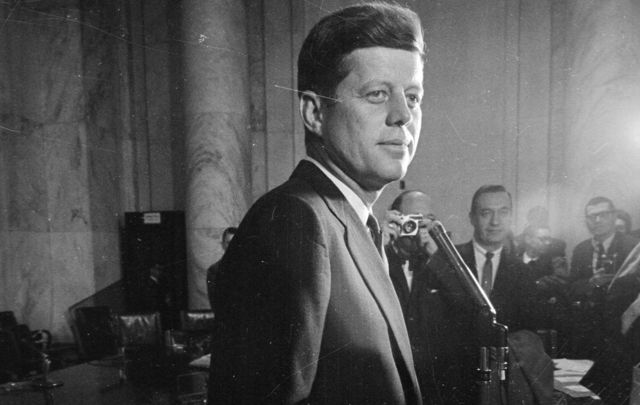 On Nov. 4, 1963, President John F. Kennedy signed this Thanksgiving proclamation, which asked God "to guide and sustain us in the great unfinished tasks of achieving peace, justice, and understanding among all men and nations and of ending misery and suffering wherever they exist."

Tragically, John F. Kennedy was assassinated just 18 days later, in Dallas, on Nov 22, making his please to the United States people to come together all the more poignant. Today, 59 years later political and social division remains and JFK's words resonate as strongly today as they did at the height of the Cold War and the Civil Rights Movement of the 1960s.

The President's proclamation begins “Over three centuries ago, our forefathers in Virginia and in Massachusetts, far from home in a lonely wilderness, set aside a time of thanksgiving.”

Kennedy then enumerates what our forefathers gave thanks for: their safety, their fields, their children. He ends by noting “the love which bound them together.”

In the proclamation, Kennedy quotes George Washington, who in his inaugural call for a thanksgiving asked the citizens of the new republic to beseech God “to pardon our national and other transgressions.”

The president was referring to the Bay of Pigs invasion, after the first “military advisers” had arrived in Vietnam, and only two months after the bombing of the 16th Street Baptist Church in Birmingham, Ala., in which members of the Ku Klux Klan murdered four African-American girls.

As Elliot Ackerman wrote in the New York Times "Maybe I’m overanalyzing Kennedy’s proclamation. Perhaps it was just a few paragraphs drafted by a staff member. Yet it reads as if it wasn’t. It reads as if Kennedy was asking the country to do one last thing: Take a break from divisions. It reads as if Kennedy could foresee the fractious decade ahead as if he knew the cost of the division was blood."

The President pleas "Let us, therefore, proclaim our gratitude to Providence for manifold blessings–let us be humbly thankful for inherited ideals–and let us resolve to share those blessings and those ideals with our fellow human beings throughout the world."

This is President John F Kennedy's Thanksgiving Proclamation 3560 in full:

Over three centuries ago, our forefathers in Virginia and in Massachusetts, far from home in a lonely wilderness, set aside a time of thanksgiving. On the appointed day, they gave reverent thanks for their safety, for the health of their children, for the fertility of their fields, for the love which bound them together and for the faith which united them with their God.

So too when the colonies achieved their independence, our first President in the first year of his first Administration proclaimed November 26, 1789, as "a day of public thanksgiving and prayer to be observed by acknowledging with grateful hearts the many signal favors of Almighty God" and called upon the people of the new republic to "beseech Him to pardon our national and other transgressions… to promote the knowledge and practice of true religion and virtue . . . and generally to grant unto all mankind such a degree of temporal prosperity as He alone knows to be best."

And so too, in the midst of America's tragic civil war, President Lincoln proclaimed the last Thursday of November 1863 as a day to renew our gratitude for America's "fruitful fields," for our "national strength and vigor," and for all our "singular deliverances and blessings."

Much time has passed since the first colonists came to rocky shores and dark forests of an unknown continent, much time since President Washington led a young people into the experience of nationhood, much time since President Lincoln saw the American nation through the ordeal of fraternal war–and in these years our population, our plenty and our power have all grown apace. Today we are a nation of nearly two hundred million souls, stretching from coast to coast, on into the Pacific and north toward the Arctic, a nation enjoying the fruits of an ever-expanding agriculture and industry and achieving standards of living unknown in previous history. We give our humble thanks for this.

Yet, as our power has grown, so has our peril. Today we give our thanks, most of all, for the ideals of honor and faith we inherit from our forefathers–for the decency of purpose, steadfastness of resolve and strength of will, for the courage and the humility, which they possessed and which we must seek every day to emulate. As we express our gratitude, we must never forget that the highest appreciation is not to utter words but to live by them.

Let us, therefore, proclaim our gratitude to Providence for manifold blessings–let us be humbly thankful for inherited ideals–and let us resolve to share those blessings and those ideals with our fellow human beings throughout the world.

Now, Therefore, I, John F. Kennedy, President of the United States of America, in consonance with the joint resolution of the Congress approved December 26, 1941, 55 Stat. 862 (5 U.S.C. 87b), designating the fourth Thursday of November in each year as Thanksgiving Day, do hereby proclaim Thursday, November 28, 1963, as a day of national thanksgiving.

On that day let us gather in sanctuaries dedicated to worship and in homes blessed by family affection to express our gratitude for the glorious gifts of God; and let us earnestly and humbly pray that He will continue to guide and sustain us in the great unfinished tasks of achieving peace, justice, and understanding among all men and nations and of ending misery and suffering wherever they exist.

In Witness Whereof, I have hereunto set my hand and caused the Seal of the United States of America to be affixed.

DONE at the City of Washington this fourth day of November, in the year of our Lord nineteen hundred and sixty-three, and of the Independence of the United States of America the one hundred and eighty-eighth.