Jack Campbell, of the 16th Division of the Royal Dublin Fusiliers, signed up to the British Army during the Great War along with his four brothers so that he could "see the world". 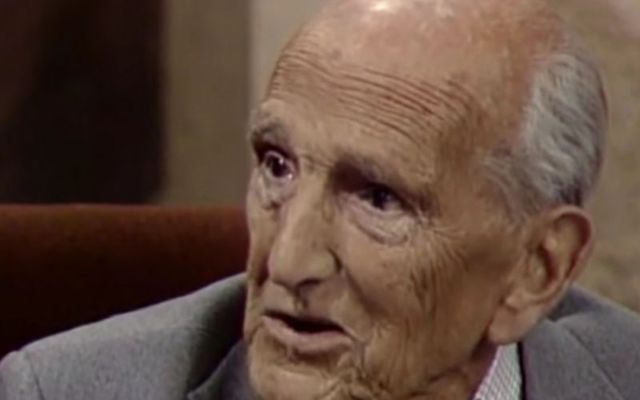 A 93-year-old Irish veteran described the harrowing experiences of the First World War in an illuminating interview in 1988.

Jack Campbell, of the 16th Division of the Royal Dublin Fusiliers, signed up to the British Army during the Great War along with his four brothers so that he could "see the world".

"The only way we could see the world was by joining the army," he told former Late Late Show presenter Gay Byrne in 1988.

Campbell told Byrne that he lied about his age so that he could join the war and said that he was the victim of a German gas attack at the Somme in April 1915. His brother was killed in the same place earlier that day.

The veteran soldier relived the horrors of the infamous First World War gas attacks, vividly recalling how the German army dispersed the poisonous gas as Dublin soldiers attended to the wounded in no man's land near Mouse Trap Farm.

Unbeknownst to Campbell, a German shell had pierced the metal container of his gas mask earlier in the day, allowing the poisonous gas to seep into his gas mask.

He said that the gas forced him to throw up and affected his vision, while he also struggled to breathe.

He was saved by one of his comrades and lost consciousness shortly afterward.

When he awoke, he found himself at the North Wall in Dublin having remained unconscious throughout the entire journey back to Ireland.

He subsequently regained his health in a private hospital at Dublin Castle.

Campbell also detailed the harrowing experiences of living in the trenches during the Great War.

He said that the soldiers persevered through "all kinds of weather" with barely any food to sustain them.

"If you had a bit of food that you were saving for a rainy day, the only safe place for it was in your stomach," he told Byrne. "The rats would find it no matter where you put it."

Campbell added that the soldiers who survived the trenches had to watch rats "gorge on the bodies of the dead", which piled up all around them.

He also told Byrne that he was "stiff with fear" whenever he had to go over the top and said that soldiers shouted as they ran toward enemy trenches to help alleviate their fears.