WATCH: Dublin celebrates as Republic of Ireland Act comes into force in 1949

The Irish Film Institute's "Irish Republic Proclaimed" newsreel shows enthusiastic celebrations on the streets of Dublin as legislation creating the Irish Republic is passed on April 18, 1949. 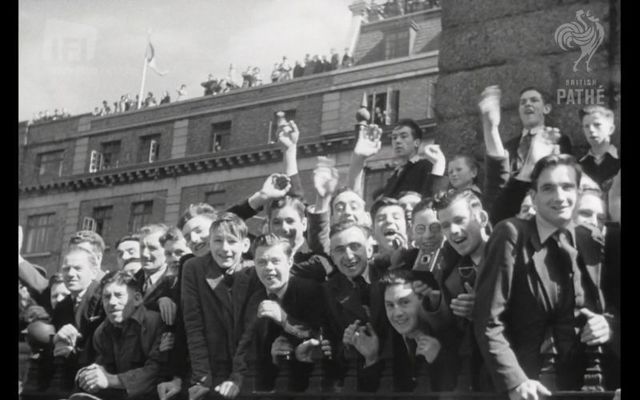 Scenes from Dublin on April 18, 1949, as The Republic of Ireland Act came into force. Irish Film Institute

On April 18, 1949, The Republic of Ireland Act came into force. Newsreel from the historic day is now available to stream for free via the Irish Film Institute's IFI Archive Player.

The new legislation declared that Ireland may officially be described as the Republic of Ireland and that the President of Ireland had the executive authority of the state in its external relations.

This momentous event in Irish history is documented in this newsreel when a collection of dignitaries, including President Seán T O’Kelly and his wife, Lord Mayor of Dublin John Breen, Maud Gonne, and Éamon de Valera, arrive at St. Mary’s Pro-Cathedral Dublin, for the ceremony.

Crowds of people gather on O’Connell Street as the Irish Republic flag is hoisted and a salute is fired on top of the GPO. Celebrations continue as the Irish Army march by, along with Irish pipers, howitzers, and armoured cars.

The Early Irish Free State Collection leads on from the IFI's previous historical release The Irish Independence Collection and explores aspects of the nation. Film production in Ireland was of low political and economic priority during this period and the newsreels, documentaries, and cinémagazines in this collection were filmed by the non-indigenous agency, British Pathé. Although this representation of Ireland through a foreign lens offers us a very specific view of the fledgling nation, it also documents aspects of Irish life that may otherwise not have been recorded. We see parts of the country struggling with potato blight, traditional craft-making, and the isolated way of life of the western islanders, in stark contrast to modern developments such as the development of hydro-power, manufacturing fairs, the promotion of brand Ireland and finally the beginning of the Irish Border, a concern which would return in this century.

These Irish newsreel stories were not held in an Irish archive until very recently and many had not been made available to the public since their distribution nearly 100 years ago. With the support of the Department of Culture, Heritage and the Gaeltacht, the Irish Film Institute was able to work with the original custodians of these collections (the British Film Institute and British Pathé) in order to repatriate, safeguard and share these vital visual records. By digitising the fragile, original nitrate film prints to high definition format, historians, academics and the public can now witness details not evident in the standard definition versions of the material, previously available.

The Early Irish Free State Collection enlists the expertise of Brenda Malone, of the National Museum of Ireland (NMI), to examine and add context to depicted events, people and locations, many of which were originally missed by non-Irish cataloguers. Additionally, Brenda links artefacts held at NMI, that carve out a broader, contextual historical map of politics, folklife, religion and tourism in the Irish Free State. Through this multiplicity of perspectives, we are able to see a nation forging its identity whilst grappling with the legacy of its tumultuous history.

"Irish Republic Proclaimed" is published here with kind permission of Fáilte Ireland and with thanks to the Irish Film Institute (IFI), who IrishCentral has partnered up with throughout 2022 to bring you a taste of what their remarkable collection entails. You can find all IrishCentral articles and videos from the IFI here.