Fr. Jack Delaney filmed the only known footage from within the Magdalene Laundries. 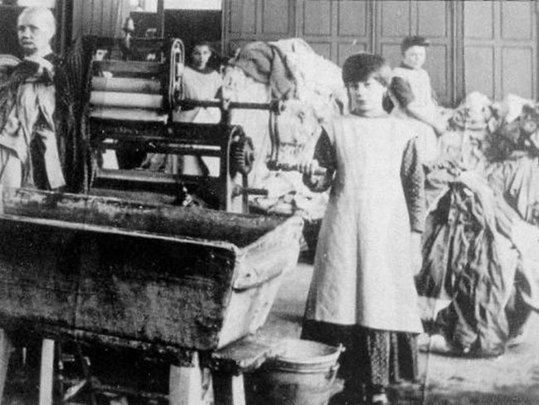 Children and women in the Magdalene Laundries. WikiCommons

In the only known footage to have been filmed from within a Magdalene Laundry, Fr. Jack Delaney has removed part of the mystery about the residents of the Catholic-run institutions in Ireland and the nuns who oversaw them.

A parish priest in an area of working-class Dublin throughout the 1930s and 1940s, Fr. Delaney was said to have been inspired by his local community and filmed their daily goings-on, from the ins and out of tenement life to children playing in the rubble. Within this, he also filmed in the local Sisters of Our Lady of Charity Convent which housed a Magdalene Laundry.

The Magdalene Laundries were institutions established in Ireland first in the 18th century and continued to operate nationwide until the later 20th century. The laundry shot in this Fr. Delaney film didn’t close until 1999.

The institutions were established with the purpose of housing Ireland’s “fallen women”, those who were regarded by the Catholic Church as having had strayed from the moral path by engaging in premarital sex, falling pregnant before marriage, or having been a victim of rape or incest.

In recent years, the treatment of Irish women within the laundries has been a subject of controversy and outrage internationally as the abuse and shame placed on the women, who were often held against their own will, has emerged into the public conscience.

Despite films such as The Magdalene Sisters attempting to recreate life in the laundries, the work of Fr. Delaney is the only real video evidence we have from one of these institutions and of how life was carried out there.

While much of the short nine-minute mute film features on the nuns in the convent, we do see the residents being ordered around the grounds, participating in religious ceremonies and performing in a play. As well as showing the day-to-day lives of these women, it also gives viewers an insight into their dress, their ages, what they looked like, and how they interacted with each other.

Born in 1906 into a middle-class family, Father Jack Delaney was ordained in 1930 aged 24. Assigned to the North Dublin inner city parish that included Gloucester Street (now Seán MacDermott Street), Rutland Street and Gardiner Street, Fr. Delaney was properly confronted for the first time with the impoverished and crowded tenement life after his own comfortable upbringing.

He was fascinated with the people in these communities and greatly admired their sense of community and their strength and resilience in the face of hardship. Although he died in 1980, Fr. Delaney’s niece Irene Devitt, along with her late husband John Devitt, deposited her late uncle’s film collection with the Irish Film Institute Irish Film Archive in the 1990s.

You can view more from the Fr. Delaney film collection and from the Irish Film Institute here.