Ireland's last Magdalene Laundry, Our Lady of Charity on Sean McDermott Street in Dublin, closed its doors on October 25, 1996. 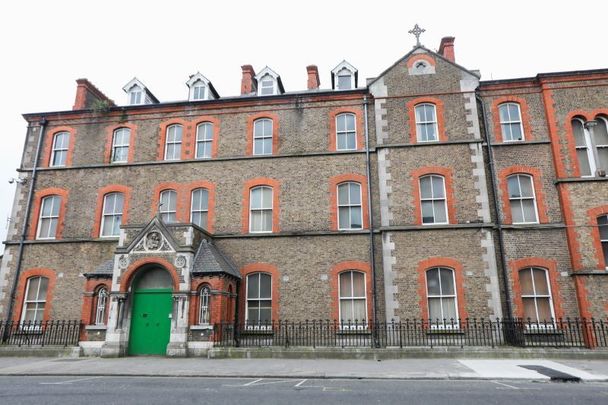 March 30, 2022: The site of the former Magdalene Laundry on Sean McDermott Street in Dublin city centre, where the Government has announced they will locate a National Centre for Research and Remembrance. RollingNews.ie

On October 25, 1996, Our Lady of Charity on Sean McDermott Street in Dublin, the last remaining Magdalene Laundry in Ireland, closed its doors.

The Magdalene Laundry shuttered about three years after the discovery of 155 bodies at the site revealed the long-term abuse of young women in Irish Catholic institutions.

The brutal treatment of women and girls in Ireland’s Magdalene Laundries was largely unknown until the 1990s. It’s estimated that 10,000 Irish women and girls were sent to these workhouses, which were run by Roman Catholic nuns.

It was only in 1993 when the Sisters of Our Lady of Charity in Dublin sold part of their convent to a property developer that the truth of the abuse and horror of these Catholic institutions was, quite literally, unearthed. A mass grave of 155 corpses was discovered, the remains of asylum inmates.

This discovery led survivors to come forward and speak of their own experiences.

Survivors, their families, and their supporters continue to fight for justice. In August 2018, survivors met with Pope Francis in Dublin working toward the goal that the Church will address the abuse suffered at their hands and work to make sure the same horrors are not repeated.

In March 2022, the Irish government approved high-level proposals for a National Centre for Research and Remembrance at the Sean McDermott Street site. The new centre is set to feature a museum and exhibition space, a research centre and repository of records, and a place for reflection and recollection.

📢 Government approves proposals for a National Centre for Research and Remembrance.

What were the Magdalene Laundries in Ireland?

From the foundation of the Irish Free State in 1922 on the Magdalene Laundries were operated by four religious orders (The Sisters of Mercy, The Sisters of Our Lady of Charity, the Sisters of Charity, and the Good Shepherd Sisters) in ten different locations around Ireland. Those incarcerated in the Magdalene Laundries included women perceived to be ‘promiscuous’, along with unmarried mothers, the daughters of unmarried mothers, those who were considered a burden on their families or the State, those who had been sexually abused, or had grown up in the care of the Church and State.

Confined for decades on end and isolated from their families and society at large, many of these women became institutionalized over time and therefore became utterly dependent on the relevant convents and unfit to re-enter society unaided.

The following is an extract from the research and advocacy group Justice for Magdalenes examining the conditions in the Irish institutions:

“Their hair was cut, and their clothes were taken away and replaced with a drab uniform. A rule of silence was imposed at almost all times in Magdalene Laundries and, in many women’s experiences, friendships were forbidden. Correspondence with the outside was often intercepted or forbidden. Visits by friends or family were not encouraged and were monitored by nuns when they did occur.

“The girls and women were forced to work from morning until evening – washing, ironing or packing laundry, and sewing, embroidering or doing other manual labor. These Laundries were run on a commercial, for-profit basis, but the girls and women received no pay. No contributions (‘stamps’) were paid on their behalf to statutory pension schemes. The laundry they washed came not only from members of the public, local businesses and religious institutions, but also from numerous government Departments, the defense forces, public hospitals, public schools, prisons and other State entities such as the parliament, the Chief State Solicitor’s Office, the Office of Public Works, the Land Commission, CIE and Áras an Uachtaráin (the President’s Residence)(to name but a few).

“Punishments for refusal to work included deprivation of meals, solitary confinement, physical abuse, forced kneeling for long periods or humiliation rituals, including shaving of hair. Survivors speak of constantly being under surveillance, being verbally insulted, feeling cold, having a poor diet and enduring humiliating and inadequate hygiene conditions. None of the girls received an education, and survivors’ dwell on this fact as determining their ‘loss of opportunity’ in later life.

“It was common for the girls and women to believe that they would die inside. Many did.”