Father Michael Morrison was with the British and Canadian troops who entered the camp in western Germany on April 15, 1945. 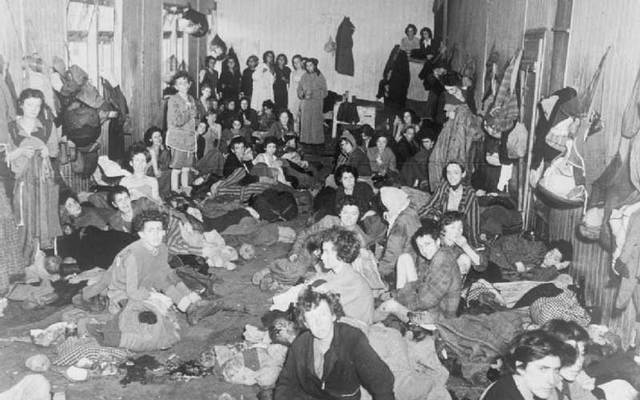 April 1945: Women and children crowded in one of the huts at the Bergen-Belsen concentration camp. Wikimedia

An Irish Jesuit priest serving as a chaplain with the British army was among the liberators of Bergen-Belson, the first Nazi concentration camp to be liberated on the Western Front during World War II.

Father Michael Morrison was with the British and Canadian troops who entered the camp in western Germany, 72 years ago, on April 15, 1945.

The liberators had no idea what they’d encounter when they entered Bergen-Belson.

Sixty thousand people were squashed into a camp designed to hold 10,000. The troops came upon hundreds of prisoners in mass graves and people suffering from severe malnutrition.

Although there were no gas chambers at the camp, the horrid conditions led to the death of 50,000 individuals between 1941 and 1945, including diarist Anne Frank, who died only three weeks before the camp was liberated.

In the immediate aftermath of the liberation, Father Michael Morrison worked tirelessly to help the wounded and tend to those still alive in the camp, reports TheJournal.ie.

From Listowel, Co Kerry, Father Morrison was ordained a priest in 1939. He joined the British army in 1941, originally serving with the 2/5th Battalion of the Welsh Regiment. In 1944, he was moved to the 2/8th Lancashire Fusiliers. Morrison served as a chaplain until his regiment was sent to Belsen in April 1945.

His diary entries describe what they faced when they first entered the camp:

“What we saw within the first few days is utterly beyond description… people crawling on their hands and knees because they have not got the strength to walk, or see them drag themselves along until they fell in the gutters to remain there, [it] was harrowing.

“Many of the bodies showed signs of cannibalism, with their livers removed. It is easy to understand when you consider the ration was half a litre of turnip soup and 120 grams of bread a fortnight.”

(120 grams of bread would be around two slices of bread every two weeks per person.)

Father Morrison’s first week at the camp was spent anointing about 300 dying people a day.

There were so many deceased prisoners that the British army had to use a bulldozer to place the bodies into a mass grave.

“Enteritis was very prevalent… in one hut two hundred and twenty had it and those statistics were compiled after several had died off. The majority of these people were too weak to leave their beds, so perhaps you get just a faint idea of the atmosphere,” Morrison writes.

“The work has been physically the most revolting that I have been called on to do, but it has also been the most consoling.”

Morrison decided to hold a Mass at the camp. The day of the Mass he considered calling it off because of heavy rain, but as he walked to the makeshift altar, he was shocked to see hundreds of people of different nationalities and from different religions waiting for the Mass to start.

Images of the camp soon reached the general public, letting the world know of the horrors perpetrated by the Nazis. Several months later, the British torched the camp, but the atrocities committed there were not forgotten.

Playwright Alan Bennett, who, at 11, saw the newsreel about the camp’s liberation, said Bergen-Belsen “was not a name one ever forgot and became a place of horror long before Auschwitz.”

Father Morrison was profoundly affected by what he witnessed at the camp.

Conor Dodd, a historian at Glasnevin Cemetery, where Morrison is buried, said: “It affected him for the rest of his life. He never quite got over it.”

After the war, Morrison briefly served as a parish priest in Australia before returning to Ireland. He died in 1973.