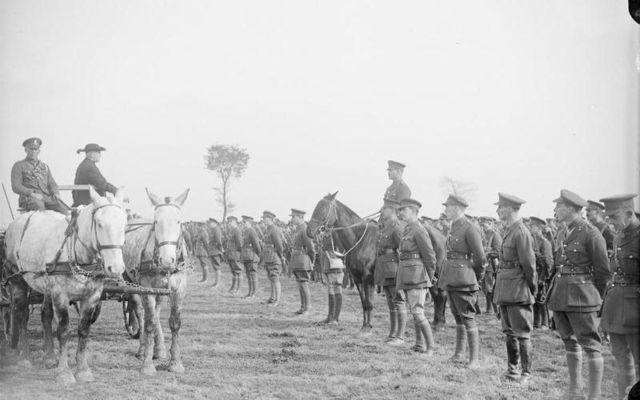 Members of the Royal Dublin Fusiliers stand to attention during the First World War in 1917. Wikimedia Commons

More than 30,000 Irish soldiers who died during the First World War have been included in an online database.

A total of 31,380 people from the 26 counties have been included in the IrelandsGreatWarDead.ie database, which went live in Ireland for Armistice Day on November 11.

The database is a digitization of military historian Tom Burnell's 15-volume series "26 County Casualties of the Great War", which was first published in 2017 after more than 15 years of research.

The 8,000-page series listed the 29,450 Irish people who died during the war, using both official and non-official sources, including the Commonwealth War Graves Commission database, cuttings from every local and national newspaper in Ireland, and the books "Soldiers Who Died in the Great War" and "De Ruvigny’s Roll of Honour".

He has added almost 2,000 names to the database since the series was published in 2017 through the In From the Cold Series, which remembers those who died during the war in non-combat situations.

The series includes civilian drivers for the military, barrack staff, and merchant seamen who died as a result of the war but are not considered war dead by the Commonwealth War Graves Commission.

The database was recently digitized with the support of Tipperary Libraries.

Burnell, who was recently diagnosed with bile duct cancer, described the publication of the online database as "one of the best days" of his life.

He said that the database was sitting on his computer for years and said that he feared he would lose it.

Burnell said that he created the database to correct original figures from the Irish National War Memorial Records, which was published in 1922 and stated that 49,000 Irish men perished during the First World War.

However, many of the casualties included were not Irish but had served in Irish regiments during the war.

Burnell said that he did not have the resources or the time to include the dead from the six counties of Northern Ireland in the database but said that would be interested in a collaboration project to accurately calculate the total war dead on the island of Ireland.

Roughly one-third of Ireland's war dead came from the six counties of Northern Ireland, meaning that an estimated 45,000 people from the island of Ireland died as a result of the First World War.