A Tyrone fisherman nets an ancient Elk catch of the day when a Giant Irish Elk's antlers got caught in his nets in County Tyrone. 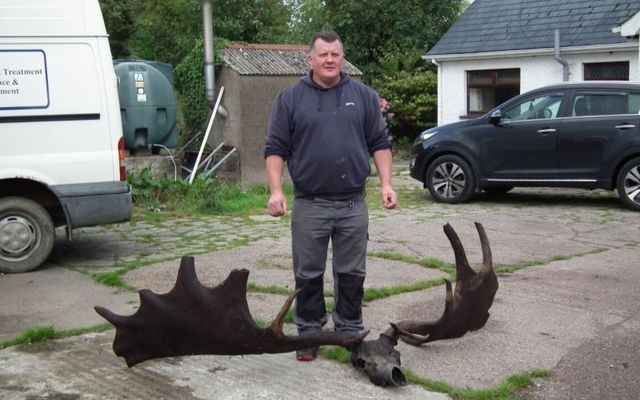 Irish fisherman Raymond McElroy caught a giant surprise when the antlers and skull of a massive, and extinct, Giant Irish Elk got entangled in his fishing nets in September 2018.

McElroy made the discovery while fishing in Lough Neagh in Northern Ireland. The commercial fisherman, a native of Ardboe in Co Tyrone, was between Salterstown Castle and Ballyronan when the giant skull wound up in his net.

Speaking with Belfast Live, McElroy said: "It came up in the net on the side of the boat. I thought it was a bit of black oak to begin with.”

"I was shocked to begin with when I got it over the side and saw the skull and antlers.”

Fisherman Charlie Coyle, who helped McElroy pull the skull from the lake, said to The Irish Times, “I thought it was the devil himself. I was going to throw it back in. I didn’t know what to do with it.”

On Twitter, Patricia Devlin (@trishdevlin) shared a picture of Coyle with the skull. The Irish journalist noted that the skull is about eight feet long.

In 2014, the jaw portion of a Giant Irish Elk was found in the same lake, and now some wonder if the two sets of bones are from the same animal.

Dr. Mike Simms from the Ulster Museum said Great Irish Elk roamed Ireland about 17,000 years ago. Environmental changes caused their extinction around 10,500 to 11,000 years ago.

Awaiting a new home, the skull of the Giant Irish Elk is currently being housed in McElroy’s garage. McElroy hopes the skull will end up where people are able to look at the magnificent specimen.