International Irish Coffee Day is January 25! Learn all about the man who created Ireland's most famous beverage and try out his iconic Irish coffee recipe. 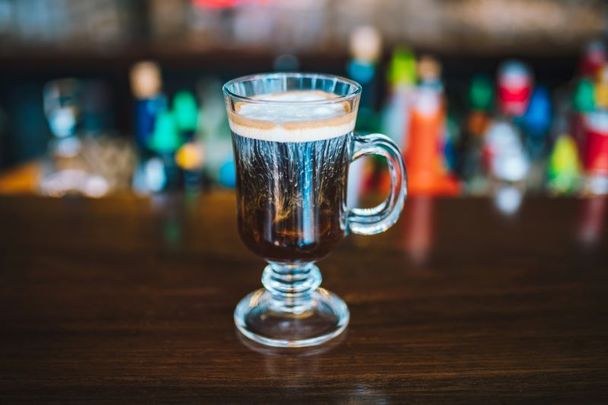 January 25 is International Irish Coffee Day, so brew yourself a cuppa Joe, or whip yourself up an Irish coffee and learn about the history of one of Ireland's most popular drinks.

Irish coffee is one of the world’s most popular drinks, yet not that much is known about why and how it became so popular.

Joe Sheridan was a top-class chef and bartender when he applied for the chef’s job at Rineanna, the townland in Limerick where the Flying Boat terminal was based at Foynes Airport. In his job application, received by CEO Brendan O’Regan, Sheridan simply stated: “Dear Sir. I’m the man for the job. Yours sincerely, Joe Sheridan."

Turns out, Sheridan was right. He got the job, which would later help make him famous.

In 1943, a Pan Am flying boat flight to New York turned back to Foynes due to bad weather. Sheridan was asked to come back to the airport to prepare hot food and drinks for the freezing passengers.

Hoping to warm the travelers, Sheridan put some good Irish whiskey into their coffees and topped it with pouring cream.

When he was asked by the passengers if he had used Brazilian coffee, Sheridan replied: "No, it was Irish coffee.”

When did Irish Coffee come to the US?

In 1951, Stanton Delaplane, a reporter for The San Francisco Chronicle, sampled Sheridan's Irish Coffee at Foynes Airport. The reporter flew home to the US and spent a long evening at The Buena Vista Cafe in San Francisco attempting to work out the proper balance of ingredients.

Soon enough, Jack Koeppler, the owner of The Buena Vista, found himself to be the proprietor of the most prosperous saloon in the city practically overnight, thanks to Irish Coffee.

Delaplane was later quoted in Time magazine as saying of Irish Coffee: "I can't stand the stuff anymore.”

Irish Coffee: as popular as ever

Today, the Buena Vista serves up to 2,000 Irish coffees a day. The busiest day they’ve ever had was the Super Bowl in 1982 when the 49ers played Miami. That day, three bartenders served 109 bottles of whiskey between 8 a.m. and 5 p.m. The night crew served another 104, meaning the pub served well over 6,000 drinks that day [6,177 specifically].

All because of a cold night and bad weather, all because of a storm in 1943 that forced a flight to America back to its origin at Foynes, Irish coffee became the first flavored coffee drink.

Fill an Irish coffee glass with very hot water to preheat, then empty. Pour hot coffee into a hot glass until it is about ¾ full and drop in 2 cocktail sugar cubes; stir until sugar is thoroughly dissolved. Add a full jigger of Tullamore Dew Irish Whiskey for proper taste and body. Top with a collar of lightly whipped cream by pouring gently over a spoon. Enjoy it while it’s hot.