They hunted down Irish runaways like animals in colonial America

The chilling newspaper advertisements that demanded the return of escaped Irish indentured servants. 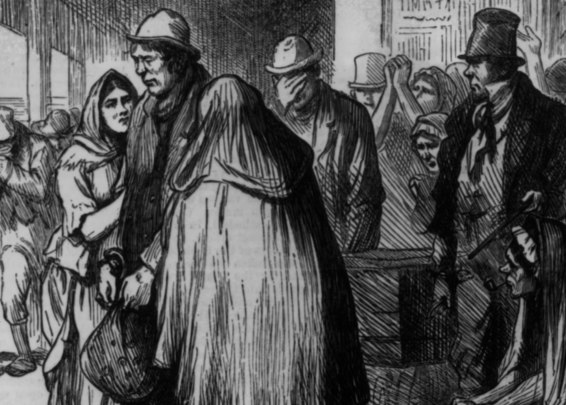 The sad reality of indentured Irish servants laid bare in the newspapers. Getty

As we celebrate Irish American Heritage Month, we should remember those who came before and suffered enormously in the New World.

The New World of America was not, for them, a tale of redemption and rising from the depths of poverty. Instead, it was a life of toil and hardship and hard times.

Indentured servitude in the Americas was the fate of hundreds of thousands of young Irish men and women transported to North America in the 18th century.

Many were hoodwinked with false promises, others were brought against their will, many had their passage paid but were forced to work as virtual slaves for periods ranging usually from five to ten years.

Little wonder that many tried to escape from their masters. The runaway Irish were pursued and many hunted down. In addition, many masters took out newspaper ads promising rewards if they were caught.

Here are some of those advertisements:

Run away, on the 12th instant, from Joseph Jackson, of London Grove, Chester county, an Irish servant man, named William Farrell, of middle stature, and brown complexion: Had on when he went away, a striped flannel jacket, a brown sailor’s jacket, a pair of coarse trowsers, striped drawers, a felt hat, and a check shirt, his hair cut off. Likewise ran away with the aforesaid servant, an Irish servant man, named Thomas Collard, belonging to Samuel Ramsay, of Londonderry, in the said county, of a dark complexion, and is pock mark’d: Had on a green double breasted jacket, with clear buttons, and red lining, black breeches, black wig, his other clothes not certainly known. Whoever takes up and secures the said servants, so that their masters may have them again, shall have Six Pounds reward for both, or Three Pounds for either, and reasonable charges, paid by JOSEPH JACKSON, or SAMUEL RAMSAY. (The Pennsylvania Gazette)

RUN away the 23d of last month, from William Hartley, of Charlestown, Chester County, an Irish Servant man, named Peter Fowler, about 25 years of age, a thick well set fellow, and has short black hair, and is very much given to drinking; he has been several years in this province, but by running away, and other misdemeanors, is still a servant : Had on when he went away, a brown linsey jacket, with pewter buttons, old cloth breeches, fine check trowsers, and good shoes and stockings, Whoever takes up and secures said servants, so that his master may have him again, shall have Five Pounds, Pennsylvania currency, reward, and reasonable charges, from William Hartley. (The Pennsylvania Gazette)

RUN away from the subscribers, on Sunday, the 17th instant, an Irish servant man, named Daniel Downs, about 30 years of age, a thick clumsey fellow; had on, when went away, a brown coloured coat, well worn, mixed linsey jacket, striped linen trowsers, blue and white yarn stockings, old shoes, check shirt, and a felt hat. Went off with him, the same day, from Joannas Glann, an Irish servant lad, about 5 feet 9 inches high, a slim fellow, red complexion; had on, when he went away, a blue broadcloth coat, a striped linen jacket, ozenbrigs shirt and trowsers, shoes and stockings. Whoever takes up said servants, so that their masters may have them again, shall have Twenty Shillings reward, if taken in the province; and if out of it, Forty Shillings, paid by JOANNAS GLANN, WILLIAM QUILLEN. (The Pennsylvania Gazette)

EIGHT DOLLARS Reward – RUN away, on the 20th of December, 1775, from the subscriber, living in Mill creek Hundred, New Castle county, an Irish servant woman, named Catherine Finnety, about 22 years of age, a middle sized woman, fair complexion; had on a red and white calicoe gown, a black silk cloak, and a black silk hat. Likewise, from the same person, on the 2d of April, 1776, an Irish servant man, named Joseph Finnety, by trade a Cooper, 5 feet 5 inches high, fair hair, his beard a little sandy; had on a light cloth outside jacket, and a dark brown under jacket, brown velvet breeches; took with him a horse, bridle and saddle, the horse a dark gray, about 14 hands high, 11 years old. Whoever takes up said servants, shall have for the woman Four Dollars, and for the man and horse Eight Dollars, paid by WILLIAM BRACKIN. (The Pennsylvania Gazette)

RUN away from the Subscribers, in Amity Township, Philadelphia County … An Irish Servant Man, named Dennis Daley, about 22 Years of Age, has the Brogue on his Tongue, a great Stoppage in his Speech, and very much addicted to Drinking and Swearing; Had on when he went away, a coarse Kersey Coat, black Callimancoe Jacket, new Ozenbrigs Trowsers, and Leather Breeches under them, white Yarn Stockings, and good Shoe, with Hobnails in them. (The Pennsylvania Gazette)

ELOPED from Mr. Burn’s schooner, in Charlestown harbor, about a week ago, a tall slim Irish indented servant, name Michael Darby, had on a blue pea jacket and towers, is about 22 years of age, a fair complexion, and lank light colored hair. Whoever will apprehend him, and deliver him to me or to the warden of the work-house, shall be handsomely rewarded. (The South Carolina Gazette)