How the Irish changed the traffic laws in Tipperary Hill, Syracuse

The youths took it upon themselves to black out the “British” red bulb in the first traffic light in 1925. 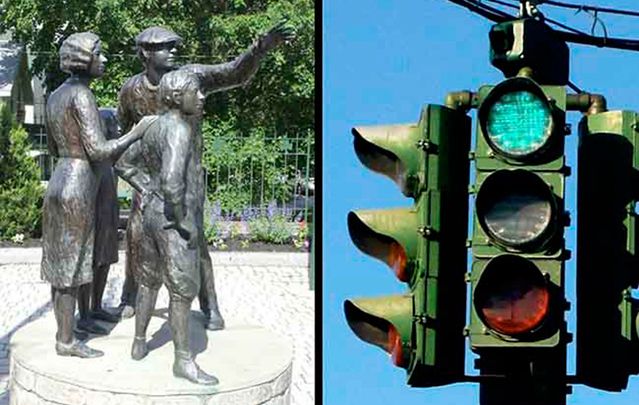 The Stone Throwers, an Irish memorial statues and the "Green over Red" traffic light.

It was the Irish immigrants, for the most part, who built the Erie Canal and then settled the area of Tipperary Hill, in Syracuse, NY, but it seems what the Irish are really known for in the area are the Stone Throwers and an inverted traffic light known as “Green over Red.”

Tipperary Hill, the district that takes up half the Far Westside neighborhood in Syracuse was settled by Irish immigrants. The Irish were the chief laborers on the Erie Canal's construction from Albany to Buffalo and Syracuse is smack bang in the middle of this route. The town became the epicenter of this endeavor and, once the canal was finished, many of the Irish laborers simply settled there.

In 1860 the section of Far Westside south of West Genesee Street was officially called Tipperary Hill. The neighborhood’s name came from the fact that a large number of the families working at the local steel mills at the time were from County Tipperary.

In 1925 the first traffic signal light was installed in Tipp Hill and it’s still a local attraction.

The light was erected on the corner of Tompkins Street and Milton Avenue. Some Irish youths, who came to be known as the Stone Throwers, objected to the fact that the “British” red appeared above the “Irish” green on the light and threw stones, which they called "Irish confetti," to break the red bulb.

A former Onondaga County Sheriff, Patrick "Packy" Corbett, was also named as one of the Stone Throwers, but he would never acknowledge his involvement.

John "Huckle" Ryan, then alderman of the Tipperary Hill section, requested that the traffic signal be hung with the green bulb above the red to placate the Irish residents. They did it.

However, New York State stepped in and had this reversed to avoid confusing the color blind. It was reversed and again the red lights were broken, again and again.

Eventually the Tipperary Hill Protective Association addressed the town rulers. On St. Patrick’s Day, March 17, 1928, Commissioner Bradley met with Tipp Hill residents. They told him that the light would continue to be vandalized. The city leaders relented, and green was again above the red light. And so the "Green over Red" traffic light was born and remains there today.

To recognize the Irish heritage in the community, in 1997, a neighborhood group convinced the city to build a small park called Tipperary Hill Memorial Park and erect a statue which is known as the Tipperary Hill Heritage Memorial or the Stone Throwers on the corner at the “Green over Red” traffic light.

The memorial is dedicated to those very Irish men who stood up to City Hall to win the traffic light battle. It features bronze, life-size figures of a 1930s Irish immigrant family and was sculpted by Dexter Benedict of Penn Yan, NY. The father is pointing out the traffic light to his wife, daughter and son, who has a sling shot in his back pocket, hinting that he might know a little bit of the history of the light.