Learn how the Guinness Brewery went from the humble beginnings of sailing barges down the River Liffey to transporting cargo ships across the Irish Sea. 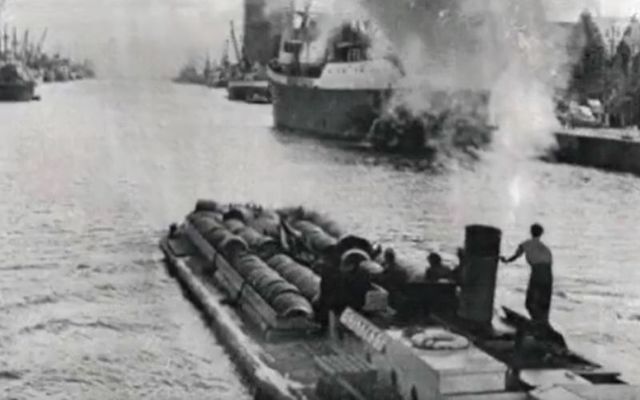 An expert at the Guinness Archives explains the history of how the brewery first began to transport cargo in Dublin and then to the world.

Arthur Guinness started brewing beer at St. James Gate, Dublin in 1759. The location of the Guinness Brewery was important because it was next to the newly built Grand Canal, which was the first step in the brewery's journey of transporting the iconic beer far and wide.

A hundred years later in 1873 the brewery expanded down to the River Liffey and built its own jetty. This enabled barges to load and unload wooden casks of Guinness directly at the gates of the Guinness Brewery for the first time.

The first Liffey barges were steam-operated and these early barges were all named after rivers around Ireland i.e Lagan, Shannon, Slaney, Foyle, Moy.

In 1919 Guinness introduced a new type of barge known as the ‘Farmleigh’ barge. These second evolution of barges were named after place names around Dublin i.e Farmleigh, Castleknock, Killiney. These new type barges could carry 87 tons of cargo, roughly three hundred hogsheads of Guinness.

The one-mile journey from the Brewery’s Victoria Quay jetty to Dublin Port took approx. 15 - 20 minutes traveling underneath eight Liffey bridges and became a common sight for many Dubliners as they crossed O'Connell Bridge in the city.

One major feature of the new barges was the ability to lower the funnel of the barge in order to pass under the bridges at high tide.

The last barge sailed down the Liffey on 23 June 1961 and the fleet of barges were all sold off.

Between 1913 and 1977 Guinness owned and crewed their own ‘Cross Channel Gangs’ and operated nine vessels tasked with the transport of Guinness in bulk across the Irish Sea to the English cities of Liverpool, Manchester, and London for bottling for the British market and for export across the world.

On 12th October 1917, a vessel known as the W.M. Barkley set sail from Dublin to Liverpool with full cargo and a crew of 13 men. At 7:00 pm she was seven miles off the coast of Ireland when she was torpedoed without warning by the German submarine UC-75 and sank within minutes claiming the lives of the Captain and four crewmen.

Following the W.M. Barkley, Guinness went on to purchase The S.S. Carrowdore. In July 1941 when fifteen miles from Dublin she survived being hit by a German bomb, suffering relatively minor damage.

The most famous ships in the fleet were the motorized vessels (M.V.’s) known as the ‘Guinness Ladies’ which were named after members of the Guinness family.

In May 1973, The Lady Patricia was converted into a bulk liquid tanker ship, probably the world’s first. The M.V. Miranda Guinness went into service twice weekly on routes between Dublin and Liverpool’s Merseyside.

She was built in Bristol, had twin diesel engines, and a speed of 16 knots. She had fifteen stainless steel tanks carrying a total volume of 6,500 barrels, almost 2 million pints of Guinness.

In April 1993, M.V.’s The Miranda and Patricia sailed out of Dublin for the last time as they had been replaced by transportable tanks and that was the end of the era of the ship for Guinness.

In 1997, it was decided to convert the Guinness Storehouse, replacing the Guinness Hop Store as the Brewery's Visitor Center.