Roger Casement, 1916 rebel executed on this day, denied hero status because he was gay

Modern era allows for a new understanding of an extraordinary man. 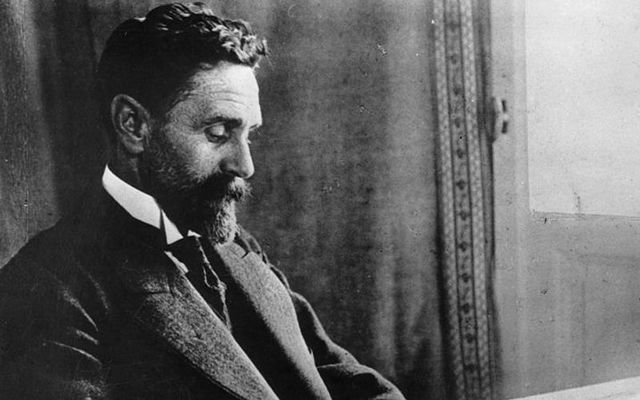 If you’ve never heard of Roger Casement, who was executed by the British for treason 103 years ago today, August 3, the reason is as simple as it is sad: he was homosexual. For that reason, he was ignored when he was not being written out of our revolutionary history.

MacDonagh and MacBride and Connolly and Pearse. Every Irish school boy or girl knows the names of all the main players in the Easter Rising of 1916, but this revolutionary patriot has long been denied his due.

At the turn of the century Casement, a longtime diplomat and human rights activist, was undergoing a profound and personal transformation. His travels were proving to him that the British Empire (and other colonial European powers) were profiting from exploitation, cruelty and murder.

Witnessing the enslavement of plantation workers in the Congo and the workers on rubber plantations in Peru had a radicalizing effect, and being secretly gay he found himself identifying with the oppressed rather than the oppressor.

Casement’s increasingly radical political views led him away from the British consular service in 1913 and toward the Irish revolutionary movement.

In 1916 he volunteered to seek German support and guns for a rebellion in Ireland to drive the British out. But he was arrested, convicted, imprisoned in the tower of London and eventually executed for treason.

That series of developments ought to have inducted him into the Irish revolutionary hall of fame, but an an unexpected wrinkle in the tale prevented it. A set of diaries, which British authorities claimed he had written in the years 1903, 1910 and 1911 was circulated. They revealed that he was homosexual, that he was remarkably promiscuous, and that he usually paid for his encounters, which involved much younger men and teenagers from a lower social class.

But they also revealed that unlike most men of his background he was not racist, he took great delight in his dalliances, and he did not think himself superior to his conquests by dint of his station.

These diaries were soon being referred to in the press as the Black Diaries, the better to convey the universal condemnation they were expected to arouse. To the British they were a political godsend, because they knew Catholic disapproval of Casement’s homosexuality would undermine political repercussions for his execution. Conservative Catholic Ireland had no use for a gay patriot, they reasoned.

In all the decades since his execution many of Casement’s most ardent supporters have spent their academic lives insisting that his famous Black Diaries were forgeries, concocted by a British espionage office eager to tarnish his name and diminish his achievements.

Read More: Gay Gaels who have enriched Ireland's history and changed the world for the better

All the public passion to rescue his reputation draws attention to the private impulse that guides it: in many people’s view you simply can’t be a patriot, a humanitarian and a homosexual. In fact, to hear some tell it, being gay is still incompatible with being Irish.

In his own time Casement’s abundant qualifications for first tier Irish martyrdom were harpooned by an aspect of his private life. Increasingly however, being gay is no longer being seen as a blot on his life and work.

On the contrary, more and more scholars are realizing that Casement’s homosexuality taught him greater compassion for the oppressed and opened his eyes to the epic hypocrisy of the British Empire’s global exploits.  It was, as they say, the making of him.

Most men of his era thought otherwise, of course, and professed themselves horrified by what they read, each attempting to outdo the other in the search for new metaphors with which to convey their disgust.

In this way they played right into the hands of the British intelligence. Casement the hero was quickly disavowed as Casement the degenerate.

But the diaries remind us how Casement himself delighted in his own invigorating dualities: Irish but knighted by the British, an Ulster Protestant turned Catholic, an establishment figure with a subterranean gay life that kept him always at an interesting remove; even Casement’s rugged exterior contradicted prevailing notions about masculinity and homosexuality.

Simultaneously an insider and outsider, his double perspective allowed him to see what many others, constrained by their class and creed, could not. In this way being gay allowed him to cross the otherwise rigidly policed class and racial lines of his era, it helped him to grow.

It seems certain now that Casement’s epic promiscuity, which led him into doubtful dalliances and opens him to charges of crass exploitation of his own, was in part the response to the impossibility of living an openly gay life in that post-Wildean era.

Read More: How two literary legends tried to save Roger Casement from the gallows

Gay relationships opened him up to whisper campaigns and blackmail attempts, but furtive and fleeting encounters with nameless and often much younger partners (who were usually far below his own social station) kept the worst talk at bay.

In this way Casement eluded the law, but in consequence he also eluded an important part of himself: connections were made but immediately broken, taking with them the possibility of growth.

The diaries are a secret record of his forcibly secret life, but they are also clearly in rebellion against it; for Casement sexual oppression found its echo in colonial oppression and it is hard to guess where one ended and the other began for him.

Like Oscar Wilde, Casement was forced to live his life twice over, once as a genteel functionary of the British establishment, and once as furtive homosexual and closet Irish revolutionary.

It was his overarching passion for justice that gave him away. Intelligence services took note of his angry reports about the cruelty and indentured slavery of the natives by colonial powers in the Congo and Peru.

They were especially alarmed by his conflation of these conditions with the conditions of the Irish. “The ‘white Indians’ of Ireland,” Casement wrote in 1913, “are heavier on my heart than all the Indians of the rest of the earth.”

Casement’s first anti-British essays were published in 1911. He resigned from the consular service in 1913 and by then he was already an ardent convert to revolutionary Irish nationalism.

To stifle the outcry from Irish America after his arrest for treason in 1916 (at the time the British were courting America to join the Allies) the British sent salacious extracts from the Black Diaries to carefully handpicked journalists, politicians and community leaders in the United States and the gambit worked instantly. Calls for clemency were muted.

Reactions in England and the United States were predictable, but in Ireland they had a little more nuance. A Dublin clergyman who had known him wrote to the Home Office in London suggesting that he be sent away to a lunatic asylum for the criminally insane rather than executed, even though “my wife thought him the most interesting and charming man she had ever met.”

Time was already writing Casement’s epitaph, however. The revolutionary generation of men like James Connolly and all their emancipatory rhetoric would be supplanted by the rural, inward-looking and heavily conservative Catholic ethos of men like Eamon de Valera.

That disastrous ascension spelled the end for Casement’s deification to the pantheon of revolutionary demigods. The leaders of the new Republic would neither admit to his homosexuality nor would they elevate him because of it. Don’t Ask, Don’t Tell became the official policy toward him and in some quarters it still is.

By now it’s become apparent that Casement will never be the white marble statue that some in the republican movement have called for. Nor will he be the sainted man of principle that many wanted to cast him as; nor will he be the passionate humanitarian free of any trace of the imperialism he decried, nor will he be the irredeemable degenerate.

Instead he is a complex and sometimes troubling mix of all of these elements, added to the prevailing attitudes of his era. His life was certainly a dramatic renouncement of the excesses of the British Empire – but he was a man in full, not a sainted effigy.

And his legacy still has much to teach us. If we can appreciate more of that flawed but humanitarian legacy now, it’s because his relevance has only increased with time.

In the years since his death he has forced Ireland, and especially its political leadership, to confront their own prejudices. There are few figureheads who have ever done likewise.