"Ireland's Dirty Laundry", a two-part RTÉ documentary, tells how Hugh and Ena McEntee and their three sons heroically rescued 15 girls from a laundry in Galway city in 1963. 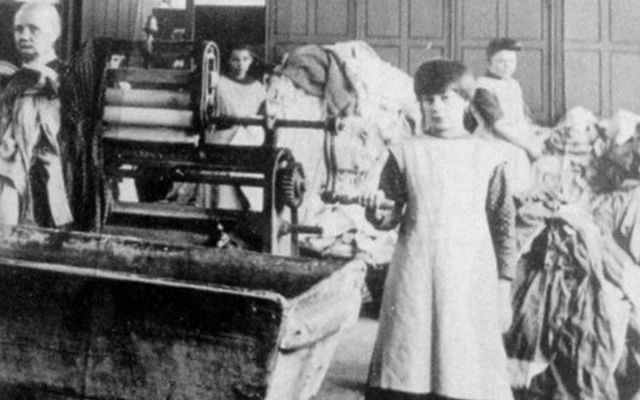 Children and women in the Magdalene Laundries. Wikimedia Commons

A two-part documentary examining the desperate escape attempts of young women trapped in Magdalene Laundries tells the gripping story of how one Galway family broke 15 women out of one laundry in the 1960s.

"Ireland's Dirty Laundry", a two-part RTÉ documentary, tells how Hugh and Ena McEntee and their three sons heroically rescued 15 girls from a laundry in Galway city in 1963.

Ena McEntee, who took up a job in the Magdalene Home Laundry in Galway at the end of 1963, became appalled by the conditions faced by young women at the home and told her family about their plight when she got home.

Her teenage sons Andy and Hugo then hatched a plan to break the girls out of the home.

The plan involved Ena working on the inside and opening the laundry door for the girls.

Her two sons then led the girls down an alleyway at a sprint to a van driven by her husband Hugh, while her third and youngest son Declan waited in the back of the van to open the door.

Andy, who was 12 or 13 at the time of the rescue, told the documentary that he had never seen anyone as scared as the girls after the rescue.

"I never saw anybody as scared. I thought we were scared until I saw these girls coming down. We ran up. Hugo was standing at the end of the walkway and he took two girls hand in hand and I took two and we went back to the van," Andy McEntee said.

He said there was "utter relief" when the van reached the family home in a corporation estate in Mervue.

The girls stayed in the family home for several days after the breakout while Ena and Hugh made arrangements to get them to safety.

One evening, Hugh drove the girls to Athenry railway station and sent them on their way to England.

"My dad looked after the financing, the girls got on to what we called the boat train and they went to England that way," Andy said.

His brother Hugo recalled how the nuns at the Magdalene laundry eventually realized that his mother had freed the girls and sent her a letter informing her that her services were no longer required.

"he read it to us. In celebration, she went down and got a Guinness for my father. We laughed and laughed at the success we had."

The dramatic story will be told in the upcoming two-part documentary, which will air on RTÉ on March 2 and March 9.

The documentary examines how the State and individual families conspired with the Catholic Church to enslave young women in the laundries.

A number of survivors appear in the documentary, tearfully recalling the horrific experience of being sent away to work in the laundries.

"You were constantly being told, ‘Nobody loves you. Nobody wants you. Your mother dumped you," survivor Maureen Sullivan told the documentary.

Other survivors recalled how they lived in a prison-like system, with round-the-clock work and evening prayers.

Regarded as "Maggies, the women worked for nothing and faced extreme verbal cruelty and physical abuse simply because they were unmarried mothers or regarded as morally wayward.

Some women found themselves in the laundries for the crime of going to the cinema twice in a week.

Many women wrote desperate letters to relatives detailing the inhumane conditions they faced but later found out that the letters were never posted.

Roughly 12,000 women lived and worked in Magdalene Laundries between 1922 and 1996 when the last laundry closed on Seán McDermott Street in Dublin.