On this day: Hurricane Charley blows into Ireland in 1986

Hurricane Charley arrived into Ireland on August 25, 1986. Here's a look at some of the worst storms that battered Ireland. 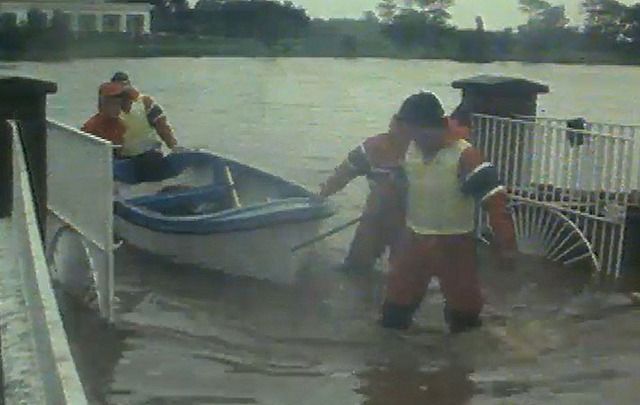 Rescuers battle the flood waters of Hurricane Charley in 1986. RTE

Ireland is accustomed to rain, but not to the extent Hurricane Charley brought along.

August 25 marks the anniversary of Hurricane Charley in Ireland. Winds of 65.2mph and rainfall peaking at 280mm in Kippure, County Wicklow resulted in the breaking of daily rainfall records and dangerous flooding, inundating over 450 buildings.

At least five people were killed as a result of Hurricane Charley. In Bray, the River Dargle overflowed, flooding some areas with almost two meters of water, leading to the evacuation of 1,000 people. $9,279,000 was allocated to repairs.

Charley was not the only major storm to batter Ireland. The island has been battered by a few fierce storms. Here is a list of Ireland's worst storms and winters ever recorded:

The Night of the Big Wind was a massive hurricane that swept over Ireland on the night of January 6, 1839.

Up to 300 people died, tens of thousands were left homeless, and winds reached well over 115 miles per hour in a category three hurricane. Twenty-five percent of the houses in Dublin were destroyed and 42 ships were sunk.

Some people claimed the temperature reached as high as 75 degrees and the heavy snow of January 5 totally melted.

During the daytime on January 6, a deep Atlantic low-pressure system began moving across Ireland, where it collided with the warm front. The first news of bad weather was reported in County Mayo. The steeple at the Church of Ireland in Castlebar was blown down.

As the evening wore on, the winds began to howl and soon reached hurricane force. The arrival of the hurricane-force winds would never be forgotten by those who lived through it.

The Dublin Evening Post described its arrival with the following: “about half-past ten, it rose into a high gale, which continued to increase in fury until after midnight, when it blew a most fearful and destructive tempest.”

In Dublin, crowds flocked to the old Parliament House in College Green to hide under the portico, believing it to be one of the few places strong enough to withstand the storm.

Anyone who lived through the blizzard of 1947 will always have it ingrained in their memory. The harsh conditions and the scarcity of fuel and food made life difficult for both man and beast.

The extreme weather began at the end of February 1947 and continued well into the month of March. The snow and wind were quite severe on the last Friday in February.

The snow fell intermittently until the Monday, when a blizzard set in with strong cold winds and harsh daytime snows – this continued for twenty-four hours nonstop. The blizzard was driven by a fierce east wind and swept the country on the Tuesday.

It paralyzed road and rail services and brought all traffic to a standstill. Huge snow-drifts, some up to fifteen feet high, were common in many areas.

The cold weather began around the middle of February and lasted through March. Up to 600 people are said to have died.

The government’s weather forecasters, Met Eireann, issued an extreme weather warning amid predictions of storm gusts of up to 80mph battering the west and northwest coasts.

Peak winds of 71mph swept across the rest of the country thanks to the tail end of Hurricane Katia, which was classified as a category four hurricane when it had hit the US coastline earlier that month.

The winter of 1962/1963 continues to be talked about in Ireland – and with good reason. It remains the coldest winter on record in Ireland and the UK since records began, according to IrishWeatherOnline’s Patrick Gordon.

The consistency of low daily mean temperatures that set in during the Christmas period of 1962, which lasted right up to the middle of March, was truly remarkable.

A hurricane downgraded to an extratropical cyclone, Charley brought heavy rainfall and strong winds to Ireland and the United Kingdom and was responsible for at least 11 deaths.

In Ireland, the rainfall set records for 24-hour totals, including an accumulation of more than 7.8 in (200 mm), which set the record for the greatest daily rainfall total in the country.

Across the country, the rainfall caused widespread flooding, including two rivers bursting their banks. In the United Kingdom, the storm downed trees and power lines and caused rivers to flood.