A video of a dramatic Aer Lingus landing at Dublin Airport during Storm Barra is making the rounds as Ireland emerges from the worst of the severe weather event. 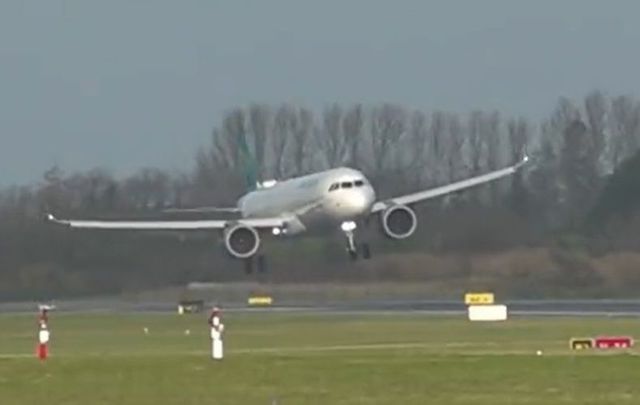 An Aer Lingus flight made a masterfully maneuvered landing at Dublin Airport while Storm Barra whipped winds across the whole of Ireland.

A video of the impressive Aer Lingus landing was shared on Twitter by user Terry Healy  on December 7 who wrote, “Windy day at Dublin Airport.”

Ireland's major airports endured severe disruptions thanks to Storm Barra which delivered widespread severe and damaging winds and heavy rain across Ireland on Tuesday and early on Wednesday.

While the Aer Lingus flight maneuvered a landing at Dublin Airport, a separate Delta Airlines flight, arriving from New York City's JFK Airport, was forced to divert to Amsterdam Schipol Airport after failing to land twice due to the high winds.

On Tuesday, another man named Joe recounted on RTE's Liveline his own dramatic Storm Barra airplane experience. Joe explained that he was seated near the wing and as the plane got close to the ground, it was rocking from side to side.

“I was near the wing, and you could see the flaps going up and they put the thrust up and took off again real fast,” Joe said.

“Then the pilot came on the intercom, and he said, ‘we’ve just done a missed approach procedure.’ Which is basically, they tried to land but it was too rocky. So, he said ‘we’re going to stay up here for five minutes, and we’ll let you know then what we’re going to do.’”

Joe continued: “Everyone was pretty scared. You could kind of tell everyone was scared.

“He [the pilot] pulled the plane around back over the sea and then as it came back in then - the five minutes you’re up there, the tension kind of builds, so by the time he was coming down again, I had put myself into that crash landing position with my head down.”

He added: “I could hear the woman beside me sobbing; I had my eyes closed because I was bricking it. I could feel her like grabbing onto my knees, and then she was apologizing for grabbing me.”

Thankfully, the plane ultimately landed safely. However, Joe said that upon landing, he saw that at least two fellow passengers had gotten sick.

Met Éireann, the Irish National Meteorological Service, reported on Tuesday that wind gusts from Storm Barra had reached 135km/h at Sherkin Island, with a mean wind speed of 111km/h.

The worst of Storm Barra, however, has now passed over Ireland with Met Éireann saying on Wednesday: "Winds have eased across the southern half of Ireland as Storm Barra continues to move into the North Sea, though it’ll remain windy across northern areas until Wednesday evening."

Met Éireann Meteorologist Aoife Kealy further said on Wednesday: “Storm Barra will continue to track away from Ireland and into the North Sea this evening and whilst winds have largely eased across the southern half of Ireland, some north western areas will continue to see windy conditions and possible impacts until this evening.”

“Conditions at sea will also remain rough and dangerous until tomorrow morning and the Irish Coast Guard are urging the public to remain mindful of the risks associated with stormy sea conditions.”

“It’ll stay generally unsettled as we head into the weekend, but winds will be much improved.  On Thursday we can expect outbreaks of rain, sunshine, and showers on Friday and then more rain over the weekend.”