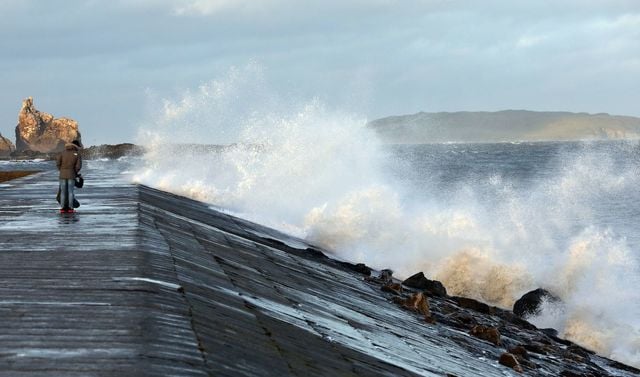 The maintenance crew at Fastnet Lighthouse off County Cork captured the breathtaking power of the "weather bomb" Storm Barra with huge sea swells as storm due to continue through Wednesday.

Footage captured by the maintenance crew at Fastnet Lighthouse, in west Cork, has gone viral. The videos released on the lighthouse's social media show incredible swells off the southwest coast as Storm Barra landed on Tuesday.

Four lighthouse workers have been stranded at the lighthouse since last Friday due to stormy conditions. They were due to return to land on Tuesday by helicopter but Storm Barra had different ideas.

Gusts of 98 mph / 159 km/h were recorded at the lighthouse on Tuesday, however Irish Lights electronic engineer Paul Barron told the Irish Times Fastnet was a safe place to be.

He and his colleagues, Ronnie O’Driscoll, Dave Purdy and Malcolm Gillies, passed the storm "watching Netflix and having a few steaks and rashers." They also said it was a day to remember, passing Storm Barra 54 meters above sea level.

Barron said he captured the footage of the 9 ft swells and added that it was so loud in the lighthouse at times that they couldn't hear each other speak.

The team hopes to return to the mainland on Thursday.

Schools closed and power out

Met Éireann has said winds will not fully abate until later on Wednesday.