Was the coward of the Titanic really a hero? New book says yes

Clifford Ismay, a distant relation of the much-maligned businessman, has recently released "Understanding J. Bruce Ismay", which aims to tell the story of Ismay's role in the evacuation of the Titanic. 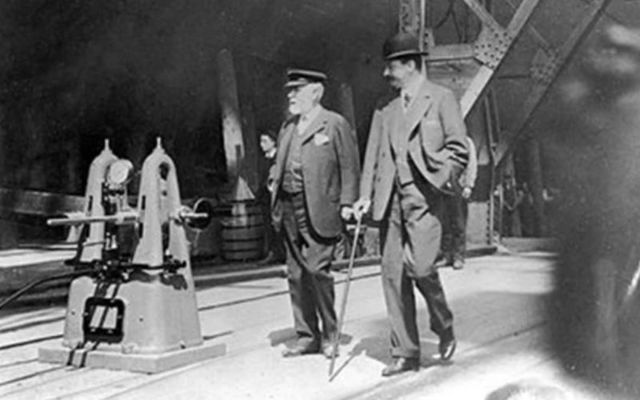 Bruce Ismay and William Pirrie inspecting RMS Titanic before its launch on 31 May 1911. Public Domain

A new book claims that Bruce Ismay - the managing director of White Star Line who was fiercely criticized for escaping the Titanic on a lifeboat - was actually a hero who helped dozens of women escape the sinking ship.

Clifford Ismay, a distant relation of the much-maligned businessman, released "Understanding J. Bruce Ismay" in April 2022, aiming to tell the story of Ismay's role in the evacuation of the Titanic.

Ismay had been showered in praise by first-class passengers on the luxury liner since it left Southampton on April 10, receiving praise for the Titanic's magnificent grand staircase, Turkish baths, libraries, and squash courts among many other luxurious features.

The businessman was woken by a loud vibration on the night of April 14 when the Titanic hit an iceberg in the North Atlantic Ocean. He initially thought that the ship had lost a propeller and pulled on his dressing gown before stepping out from his cabin to investigate.

When he reached the bridge, he received the fatal news from Captain Edward Smith, who informed him that the unsinkable ship was sinking.

Ismay sprang into action, working tirelessly in the two hours between the Titanic hitting the iceberg and the liner sinking to the bottom of the ocean.

Witnesses reported that Ismay ordered men to stand aside to allow women and children to reach the Titanic's lifeboats, helping to fill a total of eight lifeboats, according to Clifford Ismay's new book.

He played a key role in convincing women in first class to board the lifeboats, also convincing a steward who had held a woman back because she was "only crew" to allow her on board.

However, Ismay was vilified for the rest of his life for his decision to board the last lifeboat to be lowered from the doomed ship.

US newspapers labeled Ismay the "coward of the Titanic", with some claiming that his company's name should be changed from White Star to Yellow.

The bulk of the criticism came from papers owned by Ismay's rival William Randolph Hearst, who gleefully accepted the opportunity to blacken Ismay's name, according to the new book.

The book explores how Ismay only boarded the last lifeboat when a call went out for more women and none came forward. It also examines other claims that Ismay was already in the lifeboat assisting women and children when it was lowered and another claim that a man bundled him into the vessel.

Clifford Ismay's book also examines how the English businessman was haunted for the rest of his life by his decision to preserve his own life ahead of other passengers on the ship, revealing that his hair turned from black with a few strands of grey to snow-white just days after the disaster.

Charles Lightoller, one of the highest-ranking officers to survive the sinking, reported that Ismay was "obsessed with the idea that he ought to have gone down with the ship because women had gone down".

"I tried to get that idea out of his head. The doctor tried, too. But we had difficulty in arousing Mr. Ismay, solely owing to the fact that women had gone down in the ship and he had not," Lightoller said.

Ismay was also accused of encouraging the Titanic to sail at a dangerous pace in order to beat the record for an Atlantic crossing previously set by its sister ship the Olympic.

However, Clifford Ismay writes that this claim is based on the flimsy evidence of an American passenger who claimed that she overheard tell Captain Smith that he wanted the voyage to beat the world record. The passenger later said she could not positively identify Ismay or Smith with any certainty.