All the basics and some fun facts about County Mayo. 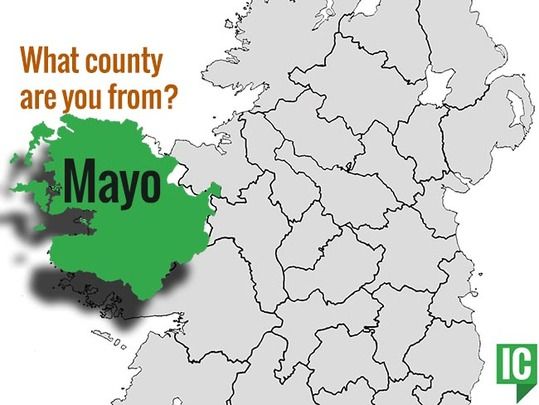 If you like this County series, why not check out some other Irish Counties here.

County Mayo is on the western seaboard of the island of Ireland. It is one of the largest counties of Ireland, the third largest in fact and is part of the province of Connacht. The county town is Castlebar. County Mayo was one of the worst affected parts of Ireland during the Great Famine in the 1840s. This resulted in a large proportion of its population starving to death. A large number of Mayo people also were forced to emigrate at this time.

Mayo is renowned for being one of the most picturesque parts of Ireland. It is home to some of the most beautiful islands off the coast of the county in Clew Bay as well as it’s bogland and heather. Ireland's largest island, Achill, lies off Mayo's west coast. Mayo has the third highest cliffs in Europe at Croaghaun, Achill island.

The River Moy which flows through Mayo’s second town Ballina is famed for its salmon fishing and Ballina hosts an annual salmon festival.

Mayo is also home to the town of Lahardane which suffered tragedy when the Titanic sank in 1912 with 18 people from the small village perishing on board.

Some of the most famous people in the history of Mayo include the Pirate Queen, Grainne O’Malley. William Brown from Foxford emigrated to South America in the 17th Century and founded the Argentinian Navy.

Mayo is home to some of Ireland’s top attractions. The Knock Shrine, a famous place of pilgrimage for Irish catholics lies close to the border with County Roscommon. Mayo is also home to place of pilgrimage, Croagh Patrick, a mountain where according to local legend, patron saint of Ireland, St Patrick fasted for forty days and nights. Today tens of thousands of people climb the mountain, some hardy souls in their bare feet. Westport is one of the most popular towns to visit for tourists. It has a vibrant restaurant scene as well as being home to some great examples of Irish traditional pubs.

Mayo has also been the setting of the famous John Millington Synge's The Playboy of the Western World.

For more stunning photos of County Mayo, check out our Mayo gallery.