This Mayo woman survived the sinking of the Titanic but 11 others from her village we not so lucky. 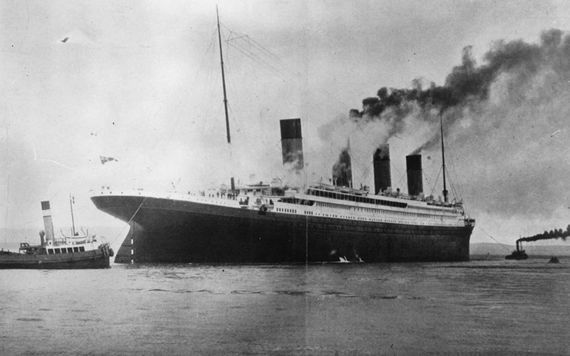 Delia McDermott survived the Titanic despite climbing out of a lifeboat to retain a prized possession. She was one of 14 people from Addergoole in Co Mayo who boarded the liner, 11 of whom perished.

Editor's Note: On April 15, 1912, the Belfast-built RMS Titanic sank after colliding with an iceberg, killing over 1,500 passengers and crew on board. This was one of the deadliest commercial peacetime maritime disasters in modern history and among those on board were many Irish.

Although one of the first to find a place in a lifeboat, Delia insisted on climbing out of the early boat to recover a prized possession. She had bought a new hat in Cawley’s shop, Crossmolina, the nearest big town to her home place in a remote part of Co Mayo, just before she traveled to America.

Journalist Tom Shiel told her story in The Connaught Telegraph of February 1998:

Nephin Mór had been snowcapped on a number of occasions during the winter of 1912 and the people in the valleys below were longing for Spring. Even when only the boggy summit of Mayo’s highest mountain was mantled in white, the people of Addergoole parish (Lahardane), indeed the whole of Ireland, had a cold time of it.

Many times that long ago spring of 1912, Delia McDermott looked westwards from her parents’ thatched cottage at Knockfarnaught at the great majestic bulk of the mountain. When the hedgerows were greening and only a few tiny stripes of snow remained on the upper reaches, Delia knew the time was fast approaching when she would be uprooted, perhaps forever, from her birthplace.

As part of her preparations for the great journey to America, she traveled one day to Crossmolina to buy new clothing. One of her purchases was a smart new hat. She liked the hat so much that weeks later she risked her life to recover it from her cabin in the ill-fated Titanic.

Delia was one of 14 people from Addergoole preparing in spring 1912 to travel on the White Starliner. Only three of the group survived. Delia, despite dicing with death on the double in order to retrieve her cherished millinery, was one of the lucky ones.

There was a great activity in Addergoole as the sailing time approached. Those not traveling were out and about on the land and in the bog, or perhaps taking the odd trip to Castlebar where the women sold eggs and the men purchased grain and farm implements.

Thoughts of turf-cutting and harvesting were far from the minds of those who were about to emigrate as they traveled by pony and trap over the steep Windy Gap and then at a smart gallop into Castlebar. By the time the scythes had felled the first grass of that year’s hay harvest, they planned to be carving out new lives in Chicago or other bustling industrial cities in the industrial United States.

In March, ten of the intending passengers, including Delia McDermott, then 28 years old, booked their passage with Thomas Durcan of Castlebar. Three others booked with another travel agent, Mrs. Walsh of Linenhall Street.

The days before they were due to travel for Queenstown were extremely busy ones for the Addergoole contingent. They visited neighbors most would never see again and there were tearful embraces on the doorstep of many a thatched cottage.

Delia McDermott’s niece, now Delia Melody of Lord Edward Street, Ballina, tells the story of a strange and chilling encounter between her aunt and a mysterious man in black in Lahardane village the evening before she left for Cobh.

"She was in Lahardane with friends when suddenly a hand tapped her on the shoulder," Mrs. Melody explained.

"She turned around and there was a little man there whom she thought was a traveler. My aunt went to give the man a few pennies and he told her he knew she was going on a long journey."

"There will be a tragedy, but you will be saved,” the little man said before disappearing.

When Delia mentioned the little man to her friends, they said they hadn’t seen anybody. Thus Delia McDermott began her long and eventful journey to the New World filled with some foreboding …

Luck was also in Delia McDermott’s favor. She was one of the first to find a lifeboat but returned to her cabin for the new hat she had bought before the journey. Says Delia’s niece, Mrs. Melody: ‘It was perhaps a foolish thing to do, but luckily she managed to get a place in a boat. She had to jump fifteen feet from a rope ladder onto the lifeboat. At this stage, the Titanic was sideways. It was going down.’

The Carpathia arrives to pick up survivors in lifeboats from the Titanic. Original Publication: The Graphic - pub. 1912 (Photo by Hulton Archive/Getty Images)

Delia indeed survived and later prospered in the United States. She never returned to Ireland.

On 25 April, Delia McDermott received $150 from the Women’s Relief Committee, formed in New York to aid survivors. She had intended to travel to her cousin, Mrs. Celia Syson, at Henrietta Street, St Louis, but never left the east coast. She moved from New York to New Jersey, marrying a fellow countryman, John Joseph Lynch of Galway. He served in the First World War and spent his working years on the Jersey City docks. They had three children – Julia, Margaret, and Tommy. Delia never spoke about her Titanic experiences and the children were forbidden to ask her about it. It appears however that Delia was rescued in lifeboat No. 13, launched from the starboard side of the ship relatively early in the night.

She was a quiet, home-loving housewife, devoted to her family. She was very devout, with daily Mass and nightly Rosary. Her one and only vice was a weekly Euchre game with friends. She rarely spoke of her experience aboard the Titanic except for having left a lifeboat to go back and retrieve her new hat. Hats being what they were in those days, it was no doubt a huge expenditure for her family and it was a going-away gift. Otherwise, I believe the ordeal was so traumatic that she closed her mind to it.