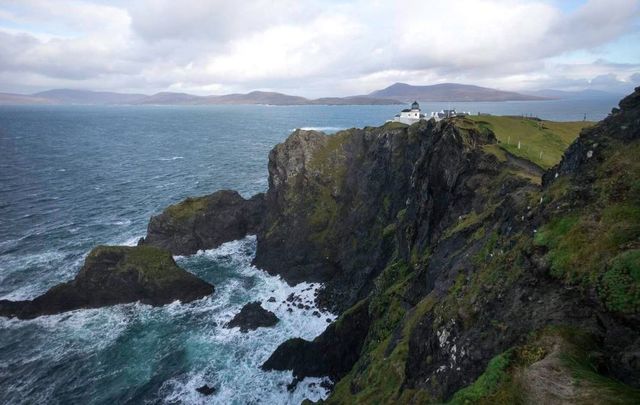 Every corner of Ireland is packed with an incredible history that spans thousands of years, and there are few places that cover the ages like the Clew Bay Archaeological Trail.

The trail consists of 21 individual sites in four sections that span County Mayo: Westport, Murrisk, Louisburgh, and Clare Island. Brown signs guide explorers to each of the sites, but in true Irish fashion they can be difficult to follow and anyone who's heading out on the trail should go prepared with a GPS, lots of patience, and a sense of adventure.

Each site has its own incredible tales, and the Boheh Stone – part of the Westport section – holds its own secret that it still surrenders on only two days each year. Dating back to the late Stone Age or early Bronze Age, the pile of stones bears some of the country's oldest neolithic artwork. From the stones, you can see Croagh Patrick, and in 1989 a local archaeologist realized that on August 24 and April 18, anyone standing at the Boheh Stone would see the sun appear to roll down the side of the mountain as it set.

Another of the oldest sites on the trail is on the Louisburgh section, and it sits along a rather unassuming road. The Srahwee Wedge Tomb marks the transition between the Neolithic and Bronze Ages, dating to sometime around 2000 BC. More recently, the top of the tomb was used in Mass celebrations, as evidenced by the cross etched into the rock's surface. Any visitors should be sure to look just across the road to a bog, the site of tree stumps estimated to be around 4,500 years old.

There are more recent pieces of history featured on the trail, too. Hidden along the Bunleemshough River outside of Louisburgh is the mid-19th century Bunlahinch Clapper Footbridge, constructed by a group of workers called the Colony of Jumpers and designed to provide a convenient place for locals to cross the river.

The Clare Island leg of the trail includes sites like the signal towers, abandoned after the defeat of Napoleon, to traces of the farming community that lived there 5,500 years ago. Court tombs built by ancient Irish people still stand, alongside Bronze Age forts and a 16th-century tower house. An abbey on the island dates back to 1224 and is rumored to be the final resting place of Grainne O'Malley, Ireland's infamous pirate queen. Her coat of arms – bearing the motto “Valiant by sea and land” – can still be seen as well.

The Famine was one of the turbulent, disastrous times in recent history, and the National Famine Monument stands along the trail in the Murrisk leg. Depicting a coffin ship, the bronze monument was created by sculptor John Behan and stands as a timeless reminder of the tragedy and loss endured by the entire country.

Along the Murrisk section, too, is a reminder of the faith that has given countless people the strength to weather the trying times faced throughout Irish history. A statue of St. Patrick stands at the foot of Croagh Patrick, and not far away are the ruins of Glaspatrick Church, said to be one of the churches founded by the saint. The church is now ruined and overgrown, but legend has it that it's the final resting place of St. Patrick's charioteer, Totmael.

Traveling the Clew Bay Archaeological Trail is about more than visiting sites that are hundreds or even thousands of years old. It's visiting the cemeteries and graveyards where the ancient nameless were mourned, buried, and forgotten. It's walking along the coastline and the pristine beaches that look much the same as they did centuries ago, and in a world that changes so much from day to day, capturing those ancient images is a valuable gift.