Recalling the brilliants of the Irish folk band The Clancy Brothers and Tommy Maken on the anniversary of the great Tom Clancy's death. 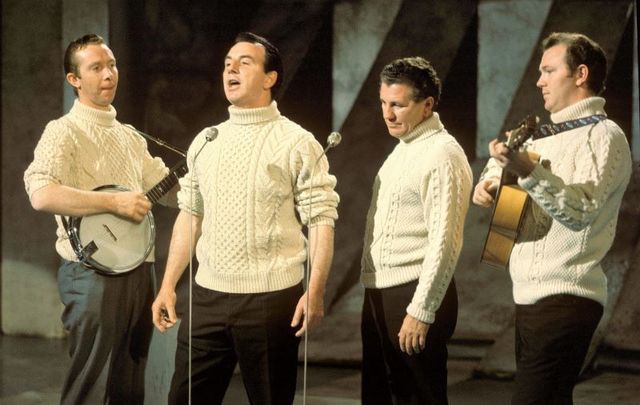 On November 7, 1990, the world lost Tom Clancy to stomach cancer, aged 66. Clancy left behind a wife, son, and five daughters, the youngest of whom was just two years old.

The traditional music world was shaken by the loss of one of the Clancy siblings, who strode to fame Aran-sweater clad during the 1960s, alongside their friend Tommy Macken.

In tribute to Tom and to his brothers Paddy (died 1998, aged 76), Bobby (died 2001, aged 76) and Liam (died 2009, aged 74) we look back on the magic of the Clancy Brothers and their influence on music in America with this article republished courtesy of our sister publication, Irish America magazine.

As Liam Clancy remembers it, being asked to perform on "The Ed Sullivan Show" did not seem like a big deal.

“We just did not understand the significance,” he told Irish America in a recent interview, during a publicity tour to promote a brilliant re-release of The Clancy Brothers and Tommy Makem performing live at New York City’s Carnegie Hall in 1963.

Two years before that historic performance, as Clancy recalls, they were a group of slightly shady characters best known in that bohemian redoubt, Greenwich Village.

“Irish-Americans weren’t really interested in us,” said Liam, the youngest of the Clancy brothers. “Pete Seeger played with us. A lot of people said: ‘They’ve got a Communist up there.’ So most of our audience were folkies and liberal Jews.”

That all changed in March of 1961. The Clancys and Makem had already moved uptown to the Blue Angel on East 55th Street, a more respectable establishment frequented by TV talent scouts.

Sure enough, the Irish musicians impressed one of Ed Sullivan’s scouts. The quartet later showed up at the Sullivan show studio for a Sunday rehearsal, only to be told that the evening’s scheduled headliner, Pearl Bailey, had bowed out.

Could the Irish men perhaps substitute?

That night, 80 million Americans from Boston to L.A. heard the revolutionary sounds of The Clancy Brothers and Tommy Makem – the performance lasted a record-breaking 16 minutes.

“It was like getting a blessing from the Pope,” recalled Liam with a laugh. Two years later came the historic concert at Carnegie Hall, where they cracked jokes about the new Irish Catholic president and earned loud applause simply by mentioning the IRA.

Clearly, something momentous had changed in Irish America. With their Aran sweaters, tin whistles and banjos, The Clancy Brothers and Tommy Makem might seem to be the quintessential Irish trad artists. But they were, in many ways, a radical departure, who then went on to change the Irish-American culture. How did they arrive at their unique musical sound? Why did some Irish-Americans consider them threatening? And how did they fit into an extraordinary moment in musical history, crossing paths with the likes of Bob Dylan?

The Clancy brothers – Paddy, Tom, Bobby, and Liam – were born into a musical family of nine children in Carrick-on-Suir, County Tipperary. Paddy and Tom served in Britain’s Royal Air Force during World War II before immigrating to Toronto, Canada. After crossing the border and living in Cleveland for a spell, the duo moved to New York City, where they planned to work as actors. They had some success on the stage and screen but also felt the need to raise a little money. So they turned to an art form that came so naturally to them: music. Particularly memorable were some of their “midnight special” performances in the early 1950s at the Cherry Lane Theatre, where they were joined by their brother Bobby, who had also served in the RAF and traveled widely in Europe before ending up in New York.

As luck (or fate) would have it, New York in the mid-1950s was turning into a breeding ground for a new kind of folk movement.

It was in the mid-1950s that Liam, the youngest brother, joined Tom and Paddy in New York when Bobby returned home to Ireland to take over his father’s insurance business. Liam too wanted to act, but he had also spent time performing, as well as studying and collecting the traditional music of Ireland. During his travels, Liam had become familiar with a particularly talented musician from Armagh — Tommy Makem. Many members of the Makem family had made their way to the U.S., to work in the textile mills of Dover, NH. Tommy did the same. He was injured on the job, however, and so joined the three Clancy brothers in New York.

When it was time to record their first album, "The Rising of the Moon," in the Bronx apartment of a young folklorist with the fine Irish name of Kenny Goldstein, they turned to a reliable formula: songs about drinking and Irish rebels. But it was clear from the beginning they were also breaking from the past.

Not only did the quartet avoid sentimental ballads, they also infused traditional Irish songs of rebellion and revelry with strands of fast-paced American folk, the improvisational feel of jazz and even the banter of cutting-edge beat poets and comedians.

The result was something familiar, yet very different. As the 1960s dawned, the group had a following, but nothing like mainstream success.

Maybe it was the unique style of The Clancy Brothers and Tommy Makem. Maybe, with one of their own in the White House, Irish-Americans were ready for a new kind of Irish music.

Or maybe it was the sweaters.

As legend has it, the Clancys’ mother Johanna sent over four, thick, white Aran sweaters so the boys could stave off New York’s winter chill. Now, Makem and the Clancys may not have been willing to play the stage Irish card, but their manager, Marty Erlichman, knew that if this act was going to hit the big time, they would have to appeal to some degree to Irish-American traditionalists.

Either way, when the quartet hit the stage on "The Ed Sullivan Show," they became at least as well known for their sweaters as for their tunes. But on the recently released recording, "The Clancy Brothers and Tommy Makem In Person at Carnegie Hall: The Complete 1963 Concert," something more than fashion or even music shines through. This recording captures the boys at the top of their game, but it also captures a unique moment in American history.

Between tunes, Makem gleefully cracks jokes about JFK – “big bad John in the White House” – as well as the American establishment.

“Hail Mary, full of grace – the Masons are in second place!” Makem cracks. Then there is the hilarious tune, “Mr. Moses Ri – Tooral – I Ay,” about a Jewish-Irish merchant who is arrested for posting a sign with his name written in Hebrew – which is swiftly mistaken for Irish Gaelic by an ambitious British police officer.

“The song was written not so much to show the love between the Irish and the Jews so much as to show the stupidity of the British,” Makem cracks.

Finally, introducing the rebel ballad, “The Patriot Game,” a mention of the Irish Republican Army – which, in 1963, had not yet earned the mythic status it later would when the Troubles heated up in the late 1960s – earns lusty applause. Loud applause for a guerilla army defined as terroristic by the British? This is not exactly what you’d expect at Carnegie Hall. But this is the new world the Clancy Brothers and Tommy Makem helped create.

Following Ed Sullivan and Carnegie Hall, it might seem as if The Clancys and Tommy Makem were suddenly famous. They even performed for JFK himself in 1963. But they were overnight sensations well over a decade in the making.

Along the way, they became famous in Greenwich Village pubs such as The White Horse as well as their “home away from home” (as Liam puts it) The Lion’s Head. Pete Hamill, Frank McCourt, and so many others made The Lion’s Head the famous “bar for drinkers with writing problems.”

Along the way, Bob Dylan became a huge admirer of the Clancys, particularly Liam. At The White Horse, Dylan and Liam would imitate the other’s, uh, unique singing style. It’s great to have this Carnegie Hall recording, but a real treasure would be to hear Dylan imitating Liam, and vice versa, on “Eileen Aroon.”

In the end, the Clancys found a way to both change, and absorb American musical styles. Thus, their work is truly Irish and American. Meanwhile, it was not just Irish-Americans who were initially surprised by their work. As Liam told Irish America: “Irish people in Ireland were surprised. They’d never heard these songs this way.”

When rock ’n’ roll eclipsed folk music in the late 1960s, the Clancys often went their separate ways. After a year’s notice, Tommy Makem left the group in 1969 to pursue a solo career. Bobby Clancy came back to fill his spot for a while and the four Clancy Brothers, sometimes with the addition of the two Furey Brothers, performed together on-and-off for the next couple of years. Tom found a lucrative career acting on TV, and Paddy devoted more time to his farm back in Ireland.

In 1975 Liam and Tommy Makem reunited to form Makem and Clancy, performing in numerous concerts and recording several albums as a duo, until 1988. The other three brothers united with their sister’s son Robbie O’Connell and went on to perform as The Clancy Brothers and Robbie O’Connell, spending several months in America each year.

In 1984, Makem & Clancy’s manager, Maurice Cassidy, brought the original foursome together for a concert at Avery Fisher Hall in New York City – the show sold out all 3,000 seats in a week.

But the Clancy Brothers’ legacy is alive and well in the 21st century. Liam not only has the Carnegie Hall show to promote. He also has a new documentary film, "The Life and Times of Liam Clancy," as well as a new album, "The Wheels of Life." He continues to tour the world, with no thoughts of retiring. “You can’t retire from living,” says the 74-year-old with a laugh.