How a Donegal "fighting" priest took on his parishioner's landlords

In the parish of Gweedore, County Donegal, on the Wild Atlantic Way, a man of faith who fought for the rights of his parishioners against unjust foreign landlords is still celebrated 102 years after his death. 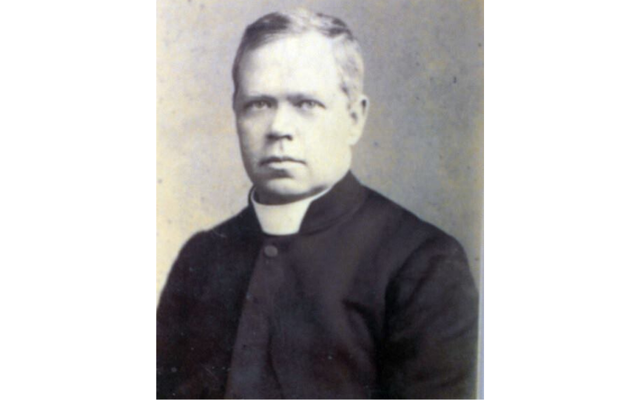 Canon James McFadden, aka "The fighting priest of Gweedore".

In the parish of Gweedore, County Donegal, on the Wild Atlantic Way, a man of faith who fought for the rights of his parishioners against unjust foreign landlords is still celebrated 102 years after his death.

That man is Canon James McFadden, also known as the "fighting priest of Gweedore". A key member of the Land League, Educator, Parish Priest and a man who was tried for the murder of RIC inspector William Martin.

James McFadden was born in December 1842, to hard-working farming stock in Dunmore Carricart. He had four siblings - John, Michael, Margaret, and Grace.

His brother Michael would eventually immigrate to America where he became a rather eccentric fire inspector in Tennessee, famous for his daily patrols on his trusted steed ‘Maggie’. No doubt named after his sister, back in Donegal.

Grace would emigrate to Australia but later return to become the future Canon McFadden’s housekeeper.

His brother John also found a vocation and spent his life as Brother Norbert McFadden, a member of the Congregation of the Passion of Jesus Christ.

Whilst from a relatively prosperous background, a young James lived through the traumatic years of the Irish Famine. The tales he was told growing up of the devastation laid waste in Ireland would have a profound impact on him and instil a burning desire to improve the lives of his fellow Irishmen and women.

He also witnessed the harsh treatment meted out to those that survived the famine by 4 notorious landlords. Lord George Hill, Lord Leitrim, John Olphert and the most notorious and vicious of the quartet, John George Adair, a wealthy land speculator from Co. Laois.

John Adair was to incur everlasting infamy throughout Donegal and Ireland by ruthlessly evicting some 244 tenants in the Derryveagh Evictions.

James would not only have a deep faith which would lead to the priesthood but a strong sense of injustice and distrust of the landlord system so prevalent in Donegal of the late 1800s.

It would be this faith and his determination to fight this pernicious system that would guide his life.

James was ordained on Jan 1, 1871, in St. Patrick's Cathedral, County Armagh, by his uncle the most reverend Dr. McGettigan.

He started his pastoral career as the curate of the parish of Upper Templecrone. Five years into his priesthood in 1875 he would move to the parish where he would make history and have such a major impact - Gweedore, County Donegal.

James McFadden found the parish of Gweedore struggling to escape the impact of the famine with many tenant farmers just one bad harvest away from starvation and immigration.

He energetically went about trying to improve the conditions of his parishioners. He obtained many relief grants and used these to build up the local infrastructure. To ensure as much of the money as possible went to his people, he often acted as an unpaid secretary, timekeeper, cashier and even engineer for many of the relief works.

In 1880 tragedy struck the parish of Gweedore. On  Aug 15, while McFadden said Mass in a packed St. Marys Church, in Derrybeg, a freak storm broke out. The church was built in a ravine where mass had been said in secret during the penal laws which outlawed the Catholic rites.

A mountain stream ran under the floor of the church.

A deluge was thrown from the heavens as thunder rang out. Soon the stream under the church was overflowing and within minutes of the storm, the masonry gave way to a torrent of water that engulfed the worshipers.

The doors became jarred by the rising tide and people began scrambling out of the windows.

McFadden aware that fatalities had taken place began to give general absolution to the congregation and then made his own escape jumping from the altar smashing a window and making his escape. Tragically five parishioners died and the flood made headlines across the globe.

Perhaps aware of his own mortality McFadden now threw himself into a whirlwind of activity to improve the lives of the people of Gweedore.

A great believer in the power of education he began a program of building local schools to ensure even the poorest child had a chance in life.

Prior to McFadden’s arrival poteen was made throughout Gweedore and as such drunkenness was a scourge, he was determined to stamp out.

He quickly formed a branch of the Temperance League and set about a campaign of closing down the “sheebens”. He would visit these, often chasing out any parishioners he found there. He was also not averse to knocking heads together and smashing them with his trademark blackthorn stick. He was short in stature but strong in will and he soon gained the nickname of 'An Sagart Mor': 'The Big Priest'.

McFadden did not believe the existing system of justice favored his parishioners so he set up his own system of District courts. He appointed local people of good standing to act as justices and the decisions of the court soon proved popular. Woe betide anyone who would seek a hearing in the British legal system as they would soon find themselves with a boycott placed upon them.

At a Land League meeting organized by Michael Davitt the British arranged to have an Irish speaking RIC Sargent Owen Mahon from Bunbeg in Gweedore attend to monitor Canon McFadden. When he announced to the crowd in Irish “I am the law in Gweedore” the authorities knew they had to act.

A warrant was issued but McFadden was not in Gweedore but in Armagh where he had gone to celebrate the month’s mind of his uncle, Archbishop McGettigan.  Undeterred the authorities transferred the warrant to Armagh and expected the local RIC to carry this out. One local Constable McBride decided he was not a priest hunter and resigned from the force.

Unfortunately, not all the RIC men were as religious as McBride and Canon McFadden was soon arrested and transferred to Derry Jail.

As he was led up the steps to the jail McFadden shouted to the large crowd “Keep the flag flying”.

He was accompanied in jail by the MP for Donegal Mr. Blaine who was also arrested for a similar offense.

Rioting in support of McFadden soon broke out and the Orange Order mobilized to attack the crowd, aided by a company of Dragoons on horseback. The authorities fearful of continuing rioting transferred McFadden on the morning of Jan 30, 1888, to stand trial in Dunfanaghy Donegal.

A large crowd had gathered to see him off, they sang God save Ireland and cheered for McFadden and his fellow prisoner Blaine. The authorities once again fearful of unrest discharged a cannon hoping the noise would create panic and disperse the crowd. It worked to a certain extent as many left Derry to accompany McFadden and support him at his trial.

When McFadden appeared in court he was charged on two counts:

Both offenses were as a result of his speech at the Land League event witnessed by Sargent Mahon who was the chief prosecution witness. He gave evidence in court reading out the shorthand notes he had taken as McFadden had spoken.

The second day of the trial had barely begun when a bizarre incident took place. Father Stephens of the nearby townland of Falcarragh a supporter of McFadden was arrested in court charged with coercion.

Despite an impassioned closing statement from McFadden’s lawyer who extolled the good deeds of the past few years and the fact that he was held in such high regard by his parishioners. The magistrates wanted only one verdict, guilty.

Canon McFadden was duly found guilty and sentenced to three months in jail.

He decided to appeal his sentence but was unlucky to come across County court Judge Webb who was vehemently anti-Land League and a staunch supporter of the landlord system. Not only was the appeal unsuccessful, but Judge Webb also increased the sentence to six months and ruled out any further right of appeal!

McFadden was finally released on Oct 16, 1888, and his journey from Derry to Gweedore was a great celebration. He was feted by great crowds along the way and given a reception in Letterkenny by Bishop of Raphoe Dr. O’Donnell.

If the authorities believed that Canon McFadden would stop his agitation against the landlords they were mistaken. At a meeting in Magheraclogher in Gweedore on the 19th December 1888, he gave a rousing speech imploring his parishioners to resist the landlords and join the Land League. The note-takers were again in attendance and another arrest warrant was issued against McFadden however as we shall see in part 2 this would lead to bloodshed, tragedy, and murder.

Read more: The execution of Kevin Barry, the last straw for Michael Collins