On This Day: The Anglo-Irish Agreement was signed in 1985

The Anglo-Irish Agreement, signed on November 15, 1985, gave the Irish Government an advisory role in Northern Ireland's Government and proved to be a stepping-stone in the peace process. 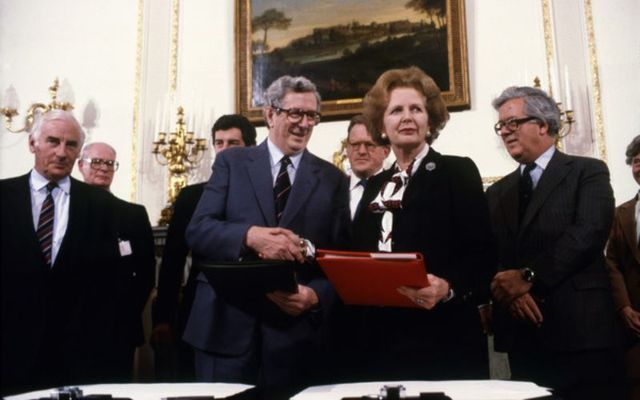 Taoiseach Garret Fitzgerald and British Prime Minister Margaret Thatcher after the signing of the Anglo-Irish Agreement in 1985. RollingNews.ie

The Anglo-Irish Agreement, which aimed to bring the Troubles to an end, gave the Irish Government an advisory role in Northern Ireland's Government while also confirming that there would be no change to the region's constitutional position unless a majority of citizens agreed.

It additionally set out the conditions for a devolved power-sharing government in the region and proved to be a stepping-stone toward peace in the region.

The Agreement was signed by British Prime Minister Margaret Thatcher and Taoiseach Garret FitzGerald on November 15, 1985, at Hillsborough Castle in Northern Ireland.

In 2012, a summer school set up in honor of FitzGerald heard that former US President Ronald Reagan played a key role in brokering the deal between the Irish and British Governments.

The inaugural Garret FitzGerald Summer School in Killarney heard in 2012 how the FitzGeralds and the Reagans came from the same parish in south Tipperary.

The Irish Times reports that FitzGerald's son Mark told the Summer School how the ancestral links between the two families helped to sway British Prime Minister Margaret Thatcher to back the agreement.

He said: “Mr. Reagan’s huge help to Ireland in that period, in the run-up to 1985 and the signing of the agreement, was not fully appreciated.”

Mark revealed how the FitzGeralds from Skeheenarinky and the Regans from Ballyporeen came from the same hillside.

“The families lived “3½ miles apart in south Tipperary, and the FitzGeralds and the Reagans had actually been godparents at each other’s christenings,” he revealed.

The paper reports that Dr. FitzGerald’s grandfather, Patrick FitzGerald, a laborer, emigrated to London in the 1850s or 1860s, while Mr Reagan’s great-grandfather had also left for London around this time, and afterward went to the US.

Dr. FitzGerald’s father, Desmond, Minister for External Affairs in the first Irish government after independence, was born in London.

Mark Fitzgerald added: “It is not widely known how influential Mr Reagan had been in working on my father’s and Ireland’s behalf in persuading Margaret Thatcher, then British prime minister, to come around to the terms of the Anglo-Irish Agreement.

“There were regular telephone calls and consultations between my father and Mr Reagan to help bring about the agreement, which laid the foundations for the Belfast Agreement 13 years later.

“Reagan was a huge help to us in persuading Thatcher to sign the Anglo-Irish Agreement. She’d agree to anything Reagan wanted. He helped Ireland in a big way.”

Speaking at the event organized by Young Fine Gael, Mark FitzGerald added: “Garret loved young people, he loved Fine Gael and politics but what would Garret say if he were here today?

“He would say the most important thing in politics is to have common high standards while embracing different views. He would say challenge people, be curious. He always said don’t complain – do something.”

Although the Anglo-Irish Agreement failed to bring the Troubles to an end, it did improve cooperation between the Irish and British Governments and was therefore a key initial step in the Northern Irish peace process.

By signing the Agreement, the British Government acknowledged the legitimate wishes of the Irish Government to have an interest in the affairs in Northern Ireland and also boosted the popularity of the peace-advocating SDLP among nationalist communities.

On This Day: Easter Rising leader William "Willie" Pearse was born in Dublin, 1881