A 2016 discovery in Co Antrim could completely alter the perception that Irish people are descended from Celts. 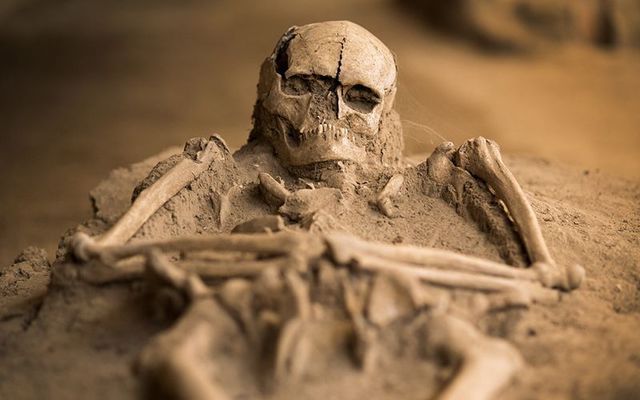 The bones could alter how we think about Irish ancestry. iStock

The chance discovery of ancient bones under an Irish pub in the mid-2000s has cast doubt over whether Irish people are actually related to the ancient Celts at all.

In 2006, Bertie Currie was clearing land to make a driveway for McCuaig's Bar on Rathlin Island off Antrim when he noticed a large, flat stone buried beneath the surface.

Currie realized that there was a large gap underneath the stone and investigated further.

"I shot the torch in and saw the gentleman, well, his skull and bones," Currie told the Washington Post in March 2016.

He eventually found the remains of three humans and immediately called the police.

The police arrived on the scene and discovered that this was not a crime scene but an ancient burial site.

It turned out to be a hugely significant ancient burial site as well that, with DNA analysis, could completely alter the perception that Irish people are descended from Celts.

A number of prominent professors at esteemed universities in Ireland and Britain analyzed the bones and said that the discovery could rewrite Irish history and ancestry.

DNA researchers found that the three skeletons found under Currie's pub are the ancestors of modern Irish people and predate the Celts' arrival on Irish shores by around 1,000 years.

Essentially, Irish DNA existed in Ireland before the Celts ever set foot on the island.

Instead, Irish ancestors may have come to Ireland from the Bible lands in the Middle East. They might have arrived in Ireland from the South Meditteranean and would have brought cattle, cereal, and ceramics with them.

The Proceedings of the National Academy of Science (PNAS) said in 2015 that the bones strikingly resembled those of contemporary Irish, Scottish, and Welsh people.

A retired archaeology professor at the highly-renowned University of Oxford said that the discovery could completely change the perception of Irish ancestry.

Radiocarbon dating at Currie's McCuaig's Bar found that the ancient bones date back to at least 2,000 BC, which is hundreds of years older than the oldest known Celtic artifacts anywhere in the world.

Dan Bradley, a genetics professor at Trinity College, said in 2016 that the discovery could challenge the popular belief that Irish people are related to Celts.