Trinity College Dublin begins a productive conversation among staff and students about how to best confront its own historic ties to imperialism. 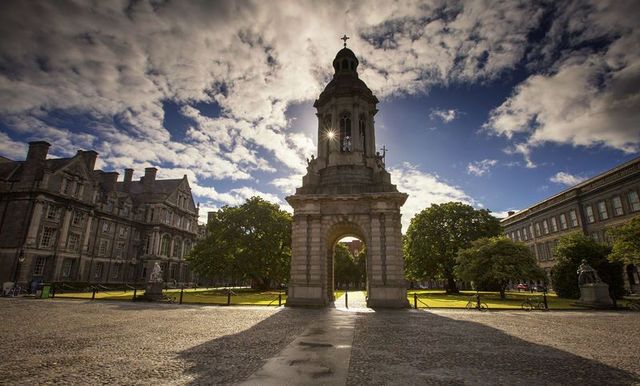 Ahead of the online panel discussion "Irish Universities and Imperial Legacies", Dr. Ciaran O’Neill explained why it's important to examine the growth as well as the negative aspects of our shared history.

Here you can watch the live discussion "Irish Universities and Imperial Legacies" back:

The summer of 2020 has seen a renewed focus on the legacies of empire in British Universities. In June 2020, Oriel College in Oxford – a sister college of Trinity College Dublin – voted to remove its statue of Cecil Rhodes only for the University Vice-Chancellor (and Waterford-native) Professor Louise Richardson, to declare that ‘hiding your history is not the route to enlightenment.’ The result of the standoff is that the University has commissioned a report on the issue that will be completed early in 2021. Until then, at least, Rhodes will stand.

Here at Trinity College Dublin, we have started a productive conversation among staff and students about how to best confront our own historic ties to imperialism. That conversation has begun, perhaps obviously, with the figureheads that might attract the attention of anti-imperial protest.

Read more: Whose history? The "migrated archive" and Britain's colonial past

In the case of Trinity, that person is likeliest to be Bishop of Cloyne, George Berkeley – a stellar philosopher and one of the most prominent scholars ever produced by the University. We named our signature brutalist 1960s library after Berkeley, who also gives his name to UC Berkeley. But he was also a slave-owner, who bought and later sold four lives. He renamed these enslaved people Philip, Anthony, Agnes, and Edward, and later sold them, donating the profits to Yale.

Trinity College Dublin prefers, generally, to speak about more robustly anti-imperial campaigners, politicians, and statesmen, and happily, there are many such figures. This is the history we want to hear, and to advance it the College often turns to perhaps the most prominent Trinity figure of the late 18th century, Edmund Burke, a philosopher, and a prominent statesman. Burke’s consistent position was anti-slavery, and he was an important public voice against the unfettered and corrupt expansion of empire at the margins, though he was somewhat selective about which evils he exposed. Trinity voices were also prominent in the anti-Apartheid movement in the second half of the 20th century, co-founded by the exiled Kader Asmal, from the Department of Law.

It is easy for us to try and balance each Berkeley with a Burke, and to point to abolitionists and anti-apartheid activists. But that is a sort of sophistry. Trinity has produced many more ideas and graduates in the service of empire than it has people who have publicly criticized it.

Trinity has numerous direct associations with the empire. It was a direct beneficiary of the colonization of Ireland, amassing endowments, parliamentary grants, and more than 180,000 acres of land confiscated from Irish people in the sixteenth and 17th-century. The curriculum of the College was progressively geared towards the needs of the empire from the 18th century onwards, with professors of Sanskrit and other exotic languages helping to teach and acculturate future colonial graduates of all Irish backgrounds.

The College collections and archives tell the same story. By the late 19th-century, Trinity was recognizably an imperial university like Glasgow or Oxford. Its zoological, botanical, and anatomical holdings were amassed by roving Victorian academics whose collecting habits at the margins of empire (and morality) have bequeathed to future generations of Trinity students a large repository of animal and human remains. Research projects in phrenology, anthropometrics, and other proto-eugenic practices were carried out enthusiastically at Trinity. Our library contains Syriac, Sumeriac, Ethiopic, and Persian materials. Trinity’s legacies are therefore an outcome of a time when Irish people were deeply invested in the imperial project.

It is not difficult to discern a coyness about empire in Irish institutions like Trinity, or the former Queens Colleges at Cork and Galway, or indeed University College Dublin, each of which produced has generations of imperial graduates from all religious backgrounds. Irish universities have some work to do in confronting their imperial legacies and are some way behind global movements for doing so. This is an important task, not just for the sake of transparency but because we must respond to the questions we are hearing from our students, who are increasingly animated by controversies such as #rhodesmustfall and the energy generated by Black Lives Matter. The demographics of our student intake has altered significantly in the past decade and our classrooms now include many more students of dual, multi, or biracial heritage. These students have probing questions about the links between Irish institutions and the empire, and we have a responsibility to answer these questions.

* Ciaran O’Neill is Ussher Assistant Professor in 19th-Century History at Trinity College Dublin and Deputy Director of Trinity Long Room Hub. He is editor, with Finola O'Kane-Crimmins, of the forthcoming book Ireland, Slavery, and the Caribbean; Interdisciplinary Perspectives (MUP, 2021).