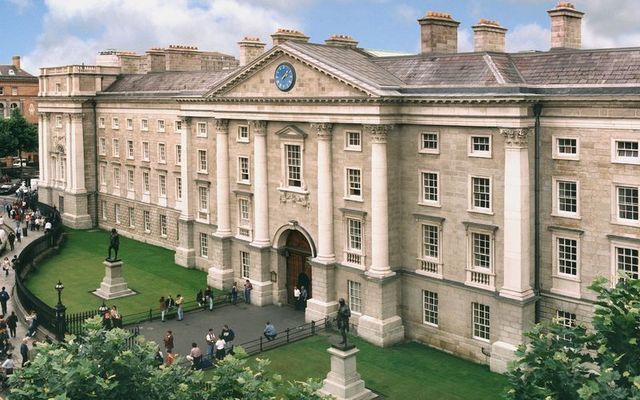 A panel discussion with the Global Irish Network in partnership with the Trinity Long Room Hub for Arts and Humanities Research will address recent debates over Ireland’s links to the legacies of Empire, including the transatlantic slave economy, networks of cultural appropriation, and embedded financial inheritances, from the perspective of the Irish university and related institutions.

The Global Irish Network at Trinity College Dublin's discussion, "Irish Universities and Imperial Legacies", will take its lead from current disputes over racial and imperial representations in the United Kingdom university system, notably, the controversy over the Rhodes Statue at Oriel College, Oxford, and extend these to an Irish context.

In hosting this conversation, Trinity College, the oldest university on the island of Ireland, will foreground its own paradoxical allegiances: in the naming of its 1960s library building it pays tribute to philosopher George Berkeley, a one-time slave owner, but simultaneously it celebrates its association with prominent abolitionist Edmund Burke, whose statue flanks the front gate of the College. In these architectural gestures, Trinity provides a springboard for wider questions: how should Irish educational and public institutions acknowledge their various imperial and colonial alliances, and to what extent should their current operations -- from capital to the curriculum -- be brought under continued scrutiny? 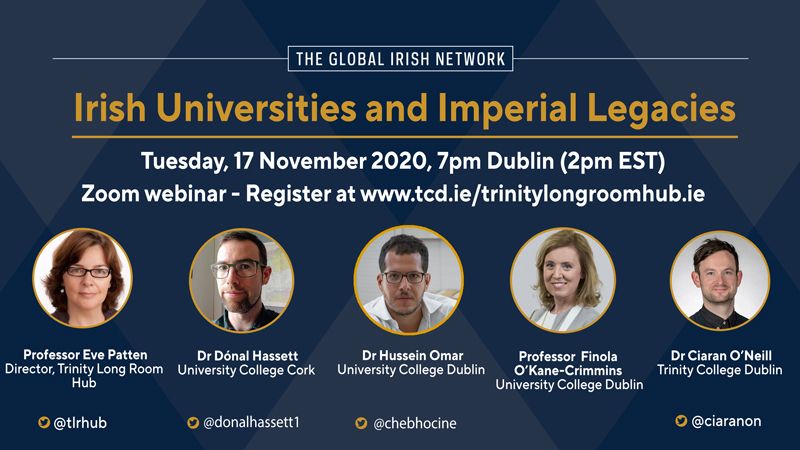 The panel will include:

- Finola O’Kane-Crimmins, Professor in Architecture at University College Dublin. Her research interests include History of Designed Landscape, Architectural and Landscape Conservation, Architectural History & Theory, Irish Social History, Architectural and Spatial Pedagogy. Elected as a member of the Royal Irish Academy in 2017, she is (with Ciaran O’Neill) editor of the forthcoming Ireland, Slavery and the Caribbean; Interdisciplinary Perspectives (MUP, 2021) as well as (with Ellen Rowley) Making Belfield: Space and Place at UCD (2020).

- Hussein Omar is Assistant Professor in Modern Global History at University College Dublin. His research examines anti-colonial political ideas in the Arabophone world in the nineteenth and twentieth centuries. His monograph The Rule of Strangers: Empire, Islam, and the Invention of "politics" in Egypt, 1867-- 1922 is forthcoming with Oxford University Press. At UCD he runs a seminar in Global History, teaches on the MA in Global History, and is designing a new BA degree in Global Studies. He was a co-author of an open letter on 'Ethics and Empire' by Oxford academics in 2017 and a contributor to the HEPI report on Decolonising the Curriculum (July, 2020).

- Dr. Dónal Hassett is a lecturer in the School of Languages, Literatures, and Cultures at University College Cork, where he teaches on topics relating to the history, the politics and the societies of France and the wider Francophone world.  He holds a B.A. and M. Phil in European Studies from Trinity College and completed his doctorate on the legacies of the Great War in colonial Algeria at the European University Institute in Florence. His research has two main focuses: the history of the French Empire, in particular North Africa, and the legacies of conflict, especially veteran studies. He has published widely on these topics and his first monograph, Mobilizing Memory: The Great War and the Language of Politics in Colonial Algeria, 1918-1939, was published by Oxford University Press in 2019. He also holds an IRC New Foundations Award for a research project, Decolonizing Irish Public Heritage.

- Ciaran O’Neill is Ussher Assistant Professor in 19th-century History at Trinity College Dublin and Deputy Director of Trinity Long Room Hub. A co-founder of Trinity’s M.Phil in Public History and Cultural Heritage, he is (with Finola O’Kane Crimmins) editor of the forthcoming Ireland, Slavery, and the Caribbean; Interdisciplinary Perspectives (MUP, 2021). His new research project, With Prof Karly Kehoe, is focused on Irish, British and Canadian links to the Eastern Caribbean.