This was the battle between the Italian Sicilian Black Hand Gang and a combination of Irish street gangs who would eventually become known as The White Hand Gang. 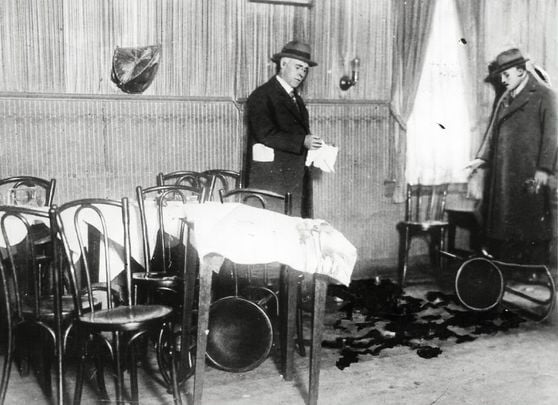 The aftermath at the Adonis Social Club on Christmas Day, 1925. Public Domain

Between 1900 and 1925 a conflict raged along the New York harbors, a war between Irish and Italian gangs to control the lucrative rackets that were available along the busy and expanding waterfront wharves and warehouses.

This was the battle between the Italian Sicilian Black Hand Gang and a combination of Irish street gangs that would eventually become known as The White Hand Gang. This vicious conflict would come to a bloody conclusion on Christmas night 1925 at the Adonis Social Club an Italian-owned speakeasy in Brooklyn when Al Capone settled his long-standing feud with the Irish Mob.

As a young man, Al Capone had left New York for Chicago to escape the Irish White Hand Gang. Their power was so fierce and their reputation so all-encompassing in Brooklyn that a young Al Capone was sent to Chicago, as many sources confirm, because The White Hand Gang had him on a shortlist of those that needed to be killed. The Mafia could not afford to lose one of its rising stars.

In reality, it was one of a few reasons for Capone’s moving to Chicago, but it was certainly true that The White Hand Gang was as powerful, if not more powerful, than the Mafia in Brooklyn at the time and Capone was too hot a prospect for the Italians to risk.

Al Capone owed mafia leader Frankie Yale a favor. Yale and his men had eliminated Al Capone’s great Irish rival and leader of the North Dean O’Banion in Chicago on 10th November 1924. It was now time for Capone to repay his debt to Yale and to finally get his revenge on the Irish White Hand Gang.

Frankie Yale had already ordered the murder of Wild Bill Lovett the leader of the Irish White Hand Gang in November 1923. He was succeeded by his brother-in-law Richard ‘Peg Leg’  Lonergan who was an intelligent man with a hot temper and known as a ruthless killer. ‘Peg leg’ was so-called because he had lost a leg in an accident with a train during a railway looting operation

By the time the 22-year-old Lonergan took it over in late 1923, The White Hand Gang was a shell of what it was during its heyday of the mid-late 1900s.

Peg Leg viciously began a fightback against Mafia encroachment. He was rabidly anti-Italian and would gleefully maim or kill any Mafia members trying to muscle in on his docklands territory. Woe betide anyone in his territory who would ever pay off the Mafia. He would often beat them up and then demand double tribute from the hapless victim.

Frankie Yale one of the leaders of the Italian black handers and co-owner of the Adonis Social Club knew he had to act to stem the rising power of the Irish mob and asked his old friend Al Capone to repay the favor he had given him in killing O’Banion and to return and help him now eliminate Lonergan.

Al Capone had the perfect cover story, his son Albert "Sonny" Capone was suffering from a bacterial infection leading to inflammation of the mastoid bone located behind the ears. Capone and his wife Mae brought their son to see a specialist in New York.

On Christmas day 1925, as his son recovered from the operation which would leave him partially deaf, Capone’s wife stayed with their son while he went to meet his friend Frankie Yale for a drink at his club. Capone and Yale had received a tip-off that Lonergan and his key lieutenants were planning to visit the Adonis Club as a show of strength and defiance.

The Adonis Club was located at 154 20th Street in Brooklyn. It was a two-story building with a basement.  A family of six also lived above the club in a small flat.

It was owned by Yale and, amongst others, boxing promoter Giacomo Stabile known as "Jack Stickem". The club was incorporated in 1917, with the aim of fostering positive relations between returning  Italian and Irish soldiers and was popular with both the local Italian and Irish population.

Al Capone made his way to the club, a venue where he had ironically practiced shooting as a young man in the basement which was a training venue for budding mafiosos.

They were looking for trouble and began to make a lot of derogatory and racial comments to people in the club.

As the night drew on Lonergan and his men became louder and drunker causing mayhem and throwing racial insults around while manhandling women. They wanted to provoke a fight.

Witnesses later reported that as the jazz band played a lively tune in the background and the revelers enjoyed the party atmosphere, the lights suddenly went out.

The room then erupted into a scene of chaos and carnage as gunfire lit up the darkness. Tables were upturned, glasses smashed, and men and women screamed as they scrambled for the doorway in a mad dash to escape the scene.

Just as suddenly as the lights had gone out, the bullets stopped. As the lights went back on, they revealed a scene of carnage as Lonergan, and his men lay dead beneath banners that proclaimed Merry Christmas.

Peg Leg Lonergan died instantly without even having a chance to pull out his .38 pistol. His gun was found on him with all the rounds intact. He had been shot in his lungs and heart. He even had a fresh toothpick still dangling from his lips.

Aaron Harms lay next to Lonergan, he also died instantly without a chance to draw his gun.

Cornelius "Needles" Ferry was found dead outside in the gutter just outside the Adonis Club. His body had been dragged out into the street and was later found by a passing policeman, Richard Morano.

James Hart was shot in the thigh and ear, but he managed to crawl outside the club and his unconscious body was found by patrolman Thomas McGrath and taken to Cumberland Street Hospital. When he recovered consciousness, he denied all knowledge of a gunfight in the club and claimed to have been shot outside by an unknown assailant.

As for Maloney and Howard, they managed to escape the carnage unhurt and immediately went into hiding, until they were later arrested and then released without charge.

On December 27th, 1925, the police picked up ten suspects in connection with the homicide at the Adonis Social Club, including Al Capone, who admitted he was present but claimed to be sitting in as a doorman for the club that evening as a favor to the owners.

A number of other people were arrested in connection with the murders, although all of them were released eventually due to lack of evidence and witnesses. The family living above the club also claimed not to have heard any shooting!

In the end, no one was ever prosecuted for the murder of Lonergan, Harms, and Ferry.

Frankie Yale had what he wanted, the Adonis Social Club massacre eliminated Lonergan, and the White Hand Gang was in chaos. This allowed the Italian Mafia to eventually force them out and dominate the lucrative New York waterfront rackets. Al Capone returned to Chicago to see in the New Year, he was a happy man, he had taken his revenge on the Irish mob.