Al Capone, US politics and the bad old immigrants

Some folks lament that today’s immigrants don’t behave like those saintly huddled masses who passed through Ellis Island... you know like Capone and his Irish wife. 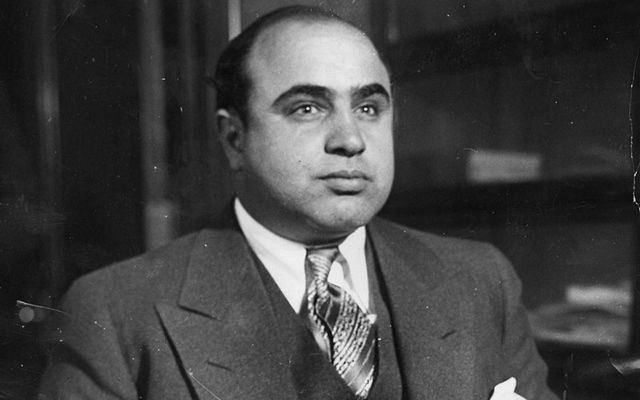 Immigrants like they used to be! Al Capone, Italian was married to Mae Coughlin, from Ireland.

A few months back, an old-timey handwritten composition touched the heart of one music lover so deeply that the anonymous bidder paid almost $20,000 for the song, entitled “Humoresque.”

Perhaps what was so touching about the song is that it, in some ways, represents what is great about America.  It is a love song, written by the child of Italian immigrants, who was married to the daughter of Irish immigrants.

“You thrill and fill this heart of mine / with gladness like a soothing symphony,” the song goes.

Of course, it may also be true that this song was worth more than your average Tin Pan Alley ditty because it was written by a fellow named Al Capone, one of the more notorious gangsters of the early 20th century, whose wife, Mae (nee Coughlin), may well have swooned at Al’s lovey-dovey lyrics. Mae also, apparently, chose not to ask many questions about what her husband did when we went off to work every morning.

The recent auction of items related to Capone and other “Gangsters, Outlaws and Lawmen” fetched over $100,000.

What an interesting time for this to happen, as angry folks continue to bellow that we must build a wall to protect ourselves from today’s predatory immigrants.

Like Jose Carranza.  This week, Carranza was identified as an “illegal alien” and “child rapist,” in a controversial ad at the center of the nasty New Jersey governor’s race between (another Irish-Italian pair) Phil Murphy and Kim Guadagno. Guadagno’s ad blasts Murphy for supporting the concept of “sanctuary cities” which, Guadagno’s camp claims, might protect the likes of criminals like Carranza.

Phil Murphy says he will make NJ a sanctuary state and his "bias is going to be having their back." Murphy is too dangerous for NJ. WATCH: pic.twitter.com/qcg1xy3Fj8

Only an idiot would deny that there is a criminal element among today’s immigrants -- legal or otherwise -- because there is a criminal element among all groups of human beings.  This is a problem many liberals have.  So desperate are they to see the downtrodden as saintly that they kind of ignore the fact that some immigrants do, indeed, commit crimes.

At the same time, only an idiot would also deny that Guadagno -- like many Republicans -- is not merely linking one undocumented immigrant to one heinous crime, but linking immigrants and crime in general.  It’s what Donald Trump did on the very day he announced his run for The White House.

On top of all this, some folks not only lament today’s welfare-mooching, no-English-speaking, child-raping immigrants.  They lament that today’s immigrants just don’t behave like those saintly huddled masses who passed through Ellis Island, from Ireland and Italy and Poland.

In the past, Flickinger opines, “immigrants struggled to learn the English language, to think like an American, to work hard and create a better life for the next generation.”

Today, though, “immigrants don’t have to speak English, and they live in neighborhoods that the police won’t patrol because they are too dangerous.”

Immigrants and crime.  Ruining America.  Not like the old days, when immigrants wanted to be good Americans.

Immigrants in the USA just aren't what they used to be... like ye know! Capone.

For the record, a few facts from a new Capone biography by Deirdre Bair.  Forget that Capone -- and thousands of other Irish, Italian and Jewish immigrant gangsters -- chose a life of crime over an honest living.

“In the world of [Mae’s] church and her Irish culture, Italians were ‘colored,’ and never to be associated with,” writes Bair.

Of course, Al and Mae did associate, and eventually had a child. Out of wedlock!  But when they did get married it was “not in his modest Italian parish…but in her…staunchly Irish” one.

Not a lot of emphasis on assimilation here, is there?

Mae’s mother, Bridget, strongly emphasized “Irish culture.” And what could Capone’s mother do?  After all, Bair writes, she “spoke no English.”

Read more: No increase in Irish being deported under Trump