Amazing gold treasure found in “chance discovery” by civilian in County Donegal eight years after a necklace was found in the dumpster. 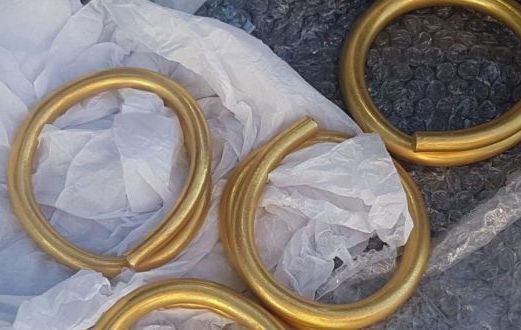 Amazing gold treasure found in “chance discovery” by civilian in County Donegal eight years after a necklace was found in the dumpster.

Four gold rings believed to date from the Bronze Age, 4,000 years ago, have been found by chance in County Donegal. A rare find such as this is usually unearthed by archaeological experts after much research and digging but these were found by a civilian, by accident, at an undisclosed location in the north-west county.

The National Museum of Ireland, home to the country’s archaeological treasures, located on Kildare Street, Dublin, were informed about this unusual find on Wednesday (June 27). On hearing that the gold rings, which are large enough to fit around an adult’s wrist, dated from between 2,500 to 500BC experts from the museum traveled to the site.

The Natioanal Museum of Ireland, on Kildare Street, Dublin.

An investigation is being carried out in the area in an effort to find how the archaeological treasure came to be left there.

Following a full investigation into the location and the rings themselves they will be put on display at the National Museum of Ireland.

Speaking to the Irish Times, Maeve Sikora, the museum’s keeper of Irish antiquities, explained that discovery of the gold items had been a “chance discovery”. She also said they will play an important role in adding to the history of the Bronze Age in Ireland.

Sikora said “Every archaeological find tells you something new about a particular period. For us it’s not just about the objects but also the context – it’s the whole package…

“It’s an important archaeological find and will reveal something new about the area, that period of time and will add to our understanding of prehistoric Ireland and how rich the culture was then.”

Due to the unusual nature of the discovery, Sikora explained, the museum could not reveal the exact location of the find in Donegal.

The Director of the National Museum, Lynn Scarf, thanked the “finders” and local Donegal community for their co-operation and said the museum was delighted by the find.

She said “We would also like to acknowledge our colleagues at the Donegal County Museum for their collaboration and assistance with this discovery, and look forward to working closely with them in relation to this find over the coming months.”

Ireland’s Minister for Heritage Josepha Madigan said her department was working closely with the national museum in their initial investigations.

The discovery of Bronze Age treasure in recent years in Ireland has been far from dull. In 2010 hoard of items, including a necklace called a lunala, was discovered in a dumpster in Dublin.

The gold Bronze Age lunala found in a dumpster in Dublin, in 2010.

The lunala was worn by the early kings of Ireland and is thought to date from between 2,300 and 1,800 BC. It was first discovered in March 1945 in Coggalbeg, County Roscommon by farmer Hubert Lannon who found it in a bog while he was cutting turf and kept it in his home.

Read more: How an ancient Irish treasure was found in a dumpster

Two years later he passed the necklace on to a local chemist Patrick Sheehan, in Strokestown, who kept the priceless piece of history in his shop's safe. There it remained until February 2009, when two thieves grabbed the safe during a burglary.

In March 2010, two men pleaded guilty to the burglary and were given three-year suspended sentences. Working with the police, curators from the National Museum’s Irish Antiquities Division found out that the jewelry along with other documents and papers from the Sheehan’s safe had been left in a dumpster in Dublin.

As the Museum director Pat Wallace put it at the time “There is a whole lot of conjoined freaks of good luck to make it possible.”

It’s makes  you wonder what the tale behind the latest four rings will be!