How an ancient Irish treasure was found in a dumpster

This gold lunala, homed at The National Museum of Ireland, has a fascinating more recent history as well as its ancient past. 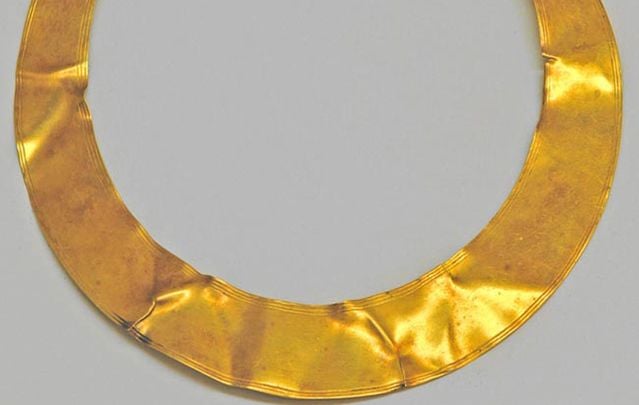 One man's trash is an Irish national treasure: A 4,000-year-old necklace was found in a dumpster. Wikimedia Commons

This gold lunala, homed at The National Museum of Ireland, has a fascinating more recent history as well as its ancient past.

Among the many rare and precious items at The National Museum of Ireland sits a lunala, as worn by the early kings of Ireland.

Among the many rare and precious items at The National Museum of Ireland sits a 4,000-year-old necklace and two discs which were found in a dumpster. The necklace, called a lunala, was worn by the early kings of Ireland. It is thought to date from between 2,300 and 1,800 BC. It was first discovered in March 1945 in Coggalbeg, County Roscommon by farmer Hubert Lannon. He found it in a bog while he was cutting turf and kept it in his home.

Two years later he passed the necklace on to a local chemist Patrick Sheehan, in Strokestown, who kept the priceless piece of history in his shop's safe. There it remained until February 2009, when two thieves grabbed the safe during a burglary.

In March 2010, two men pleaded guilty to the burglary and were given three-year suspended sentences. Working with the police, curators from the National Museum’s Irish Antiquities Division found out that the jewelry along with other documents and papers from the Sheehan’s safe had been left in a dumpster in Dublin.

By the time the police had received this information they literally had hours to locate the dumpster before the trash would be collected. The detectives who waded through the dumpster of trash to find the delicate jewelry, which weighs just 78 grams, were rewarded on the retrieval of the treasures.

The three pieces, the necklace, and two discs are thought to be one of the most important archaeological discoveries for many years. As the Museum director Pat Wallace said, “There is a whole lot of conjoined freaks of good luck to make it possible.”