One of the 1916 Easter Rising's stranger episodes. Thomas Kent did not go out to fight. The British came to him, looking for trouble. One of the 1916 Easter Rising's stranger episodes. Thomas Kent did not go out to fight. The British came to him, looking for trouble.

Ireland's 1916 Easter Rising took place over the course of five days in Dublin and forever changed the course of Irish history. To commemorate the historic event, writer and historian Dermot McEvoy has produced 16 profiles of the Irish Rebel leaders who were executed one hundred years ago and who, gradually, have come to be seen as heroes.

The story of Thomas Kent is one of the stranger episodes that happened after the rebellion in Dublin had been quelled. Unlike the Dublin rebels, Kent did not go out to fight. In fact, the British came to him, looking for trouble.

Thomas Kent was born in Castlelyons, County Cork in 1865. After spending some time in Boston he returned to Ireland because of poor health. He was active in the Land League, Sinn Féin and the radical Irish Republican Brotherhood. With the launch of the Irish Volunteers in 1913, he was prominent with another legendary Cork man—Terence MacSwiney—in organizing and training the recruits. Because of confusion about orders and the loss of the Aud’s cargo of guns, Kent did not go out to fight at Easter. The rebellion went on in Dublin, but everything was very quiet in Cork.

After the surrender of the rebel forces in Dublin, the British decided it would be a good idea to round up prominent nationalists around the country. In Cork, they decided to go after men like Thomas Kent.

On May 2 at 3:45 a.m. seven members of the Royal Irish Constabulary (RIC), under the command of Head Constable Rowe, came to arrest Kent and his brothers William, David, and Richard. Told to come out, the Kent brothers supposedly responded: “We will not surrender. We will leave some of you dead.” In the ensuing gunplay, Constable Rowe was hit in the head by gunfire and died instantly. A four-hour holdout ensued until the British military responded to support the RIC. William and Thomas surrendered and were followed by their mentally disturbed brother Richard, who panicked, ran, and was gunned down. Brother David was also wounded but recovered.

On May 4 Thomas and William were court-martialed. William, who was not political, was found innocent but Thomas was found guilty in the death of Constable Rowe. Most legal observers would have looked at this as a case of ordinary murder, but the British were out for blood and indicted Kent with the same charge that they were charging the Dublin rebels with: “Did an act to wit did take part in an armed rebellion and in the waging of war against His Majesty the King, such act being of such a nature as to be calculated to be prejudicial to the Defence to the Realm and being done with the intention and for the purpose of assisting the enemy.”

Kent was found guilty and his death sentence was confirmed by General Maxwell. “I have done my duty as a soldier of Ireland,” said Kent just before being taken out, “and in a few moments I hope to see the face of God.” He was executed in the early morning hours on May 9. According to one of the servicemen present, Kent died “very bravely. Not a feather out of him.”

When news of the execution reached John Dillon of the Irish Parliamentary Party on May 11 he got up in the House of Commons on and let loose: “I have received word that a man named Kent has been executed in Fermoy, which is the first execution that has taken place outside Dublin. The fact is one that will create a very grave shock in Ireland. Because it looks like a roving commission to carry these horrible executions all over the country. This, I say, was the first execution outside the city of Dublin. In a district where there have been no serious disturbances.”

Dillon then turned his wrath on General Maxwell: “Would not any sensible statesman think he had enough to do in Dublin and the other centers where disturbance broke out without doing everything possible to raise disturbance and spread disaffection over the whole country?”

Dillon then dug into the Prime Minister, Asquith: “You are letting loose a river of blood and make no mistake about it, between two races who, after three hundred years of hatred and of strife, we have nearly succeeded in bringing together.”

Dillon’s tirade served to put the focus on the British government and the cruelty and thoughtlessness of their executions. It would not save Seán MacDiarmada and James Connolly, who died the following day in Dublin (nor Roger Casement three months later), but it would save Kent’s brother, David, whose trial would be in the open and whose execution would be stayed.

And the story of Thomas Kent does not end in 1916. There was some closure for the Kent family in 2015. Thomas Kent’s body was disinterred from the Military Detention (now Collins) Barracks and identified by DNA. His funeral was attended by the President of Ireland, the Taoiseach, and the British and American ambassadors.

“This strange and unusual set of circumstances were forged by the tragic events of 99 years ago,” said William Crean, the Bishop of Cloyne, told the congregation, “when Thomas chose to give his life in the cause of freedom. He and others thereby sowed the seeds of the flowering of a new political dispensation which would become the Republic of Ireland, of which we are all beneficiaries.” 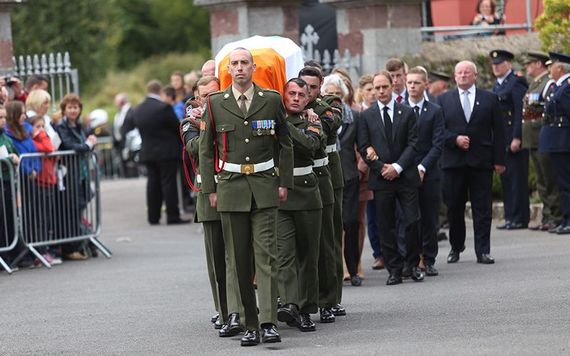 Commandant Gerry White of the Irish Army delivered the funeral eulogy: “Today, because of the recent discovery of his remains, Thomas Kent has once again become someone who is very much in the present. Today, members of Óglaigh na hÉireann, the Irish Defence Forces, will render the military honors that were denied him 99 years ago. Today, he will no longer be the ‘Forgotten Volunteer.’ Today, after 99 years, Thomas Kent is finally coming home.”