IrishCentral founder Niall O'Dowd says that he had no expectation of finding any DNA strain outside of Irish. 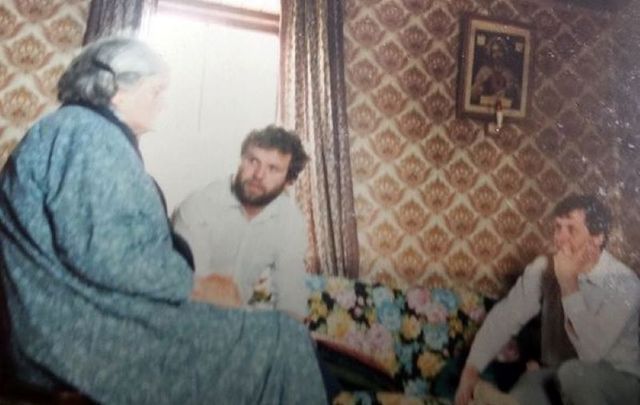 Niall O'Dowd and his brother Fergus with their great-aunt in West Kerry. Niall O'Dowd

IrishCentral founder Niall O'Dowd, who was born and raised in Ireland, made some surprising discoveries after taking a DNA test through Ancestry.com in 2017.

Below is IrishCentral founder Niall O'Dowd's personal experience of taking a DNA test:

I took the Ancestry DNA test about two months ago, figuring it would be helpful to find out where all my Irish relatives traced back to.

The whole thing is pretty seamless. You go to Ancestry.com online, request a test, and in a few days, a package arrives. You spit into a tube until it is almost full of your saliva and you send the completed test back. It cost $99 and is worth every cent.

I can honestly say I had no expectation of finding any DNA strain outside of Irish as far as I could imagine. No relative of mine going back generations had come from anywhere other than the Emerald Isle. I had never heard of any foreign relatives and did not believe my family had stirred at all from its Irish roots.

My brother joked with me and asked what I would do if I found out I’m also of British heritage. As an Irish nationalist, I told him I’d sooner go for a swim in the Hudson River here in New York. Perfidious Albion was not part of my makeup I told him. No way.

I’ll have to withdraw my pledge to swim the Hudson. It turns out I am 14 percent British, the kind of news that left me speechless, quite a feat as many of you will know.

I’m even a tiny bit Asian, with roots tracing back to South East Asia thousands of years ago, my ancestry chart tells me. It’s only two percent but could possibly explain my passion for Chinese food!

My main genetic origin was traced back to Dingle, County Kerry, which greatly strengthened my belief in the credibility of the test. My father's family had lived there or thereabouts for hundreds of years though I, personally, did not grow up there.

My mother’s family moved around much more from Sligo to Clare and the western region so the imprint was clearly not as strong. The West Kerry clan most likely always married locally, no surprise given how remote the area was for hundreds of years. It remains one of the few Irish speaking areas left in Ireland, simply because of its remoteness.

I also discovered via Ancestry that I have 221 cousins ranging from third cousins to sixth cousins who share some part of their DNA with me. I now have their Ancestry.com emails and have been busy writing to the closest ones.

As for the British link, I do love the Guardian, Macbeth, Premier League, English chocolate, British horse racing, Monty Python, and I love London where I lived for a time.  From living there I know the ordinary British are great. It’s when they have leaders like Maggie Thatcher that I get my back up.

The Ancestry.com experience has been a wonderful insight for me into the arc of my history and heritage I never knew about. It was uncanny how they were able to pinpoint West Kerry as my prime area of ancestry and the 221 cousins will provide much interesting correspondence in the years ahead.

All in all, prepare to be surprised if you undertake the test. The chances of being 100 percent Irish are very small I was told.

I visited Ancestry’s Dublin headquarters a few months back and the work they do is highly impressive.

It is no surprise the company is thriving. In a globalized world, the need to connect on a family level and with fellow tribe members has never been greater.

I’m looking forward to figuring out where the British link came from. Did some British soldier, centuries ago, go native and marry a relative? Was he one of Cromwell’s men, horror of horrors?

Or was it a natural aspect of a seafaring people that connections and intermarriage between tribes in Wales, Scotland, and England took place with the old Celtic clans.

I may never find the answer, but I can say it has led to a very interesting aspect of my life that I had not given any thought to.

Now excuse me while I try and round up some of these 221 cousins I never knew I had. The next O’Dowd clan get together might be very interesting!