Celtic chariot discovered by amateur with metal detector could win him a $1.3 million reward

History fanatic Mike Smith discovered the remains of a tribal elder and his weapons in the UK. 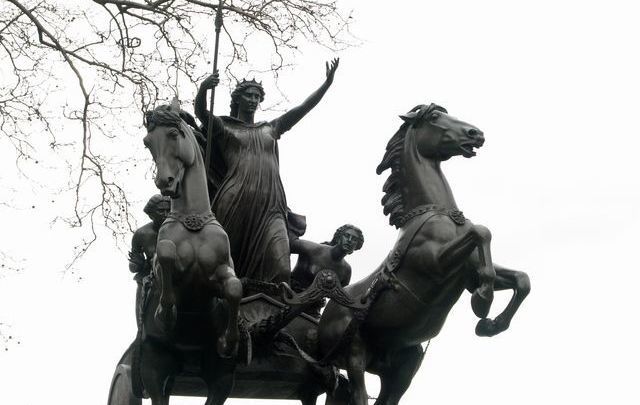 Statue of the queen Boadicea in London. Getty

A history lover with a metal detector has come across the historical find of a lifetime, unearthing a Celtic chariot believed to be two thousand years old.

Mike Smith became the first ever amateur to discover a Celtic chariot with a metal detector and now is set to sell it off - as he legally must - to a museum in Wales for over $1.3 million.

The find, thought to date from between AD 25 to 75, was made in Pembrokeshire.

“It’s the biggest ever metal detecting find, as in there’s never been a chariot ever discovered by a metal detectorist.

“There have been hoards found, but never anything like this.”

“It’s the biggest ever metal detecting find, as in there’s never been a chariot ever discovered by a metal detectorist” https://t.co/NYsEGTtDBw

Smith first believed he had found a brooch but it turned out to be a piece of a horse’s harness. Going back the following day, he unearthed more red enamel pieces, leading to the full burial discovery. Celtic chiefs during the Iron Age would have been laid to rest with their chariot, horses, tack, and weapons in this manner.

“I knew the importance of them straight away,” he said.

“It was just instinct. I’d read all about chariot burials and just wished it could have been me, so finding this has been a privilege.

Iron Age chariot found by metal detectorist could fetch up to £1m after it is declared as treasurehttps://t.co/QdVBAoOrjK

The site of the discovery is currently being kept under wraps as a further dig is carried out but Smith may be set to receive up to $1.3 million from selling his find to an institution. Smith must sell the 34 artifacts to a museum by law and share 50% of the payment with the landowner.

The Daily Mail reports that National Museum Wales wished to purchase the treasure.

“These chariot pieces may have been witness to some of the historical events of the time, as Iron Age peoples defended their ways of life and identities, in the face of an expanding Roman empire,” said Adam Gwilt, the museum’s principal curator of prehistoric archaeology.

“Something like this takes a lot of organization and funding as well so we’ve been working with a number of partners to put together what’s needed to do a continuing investigation.”