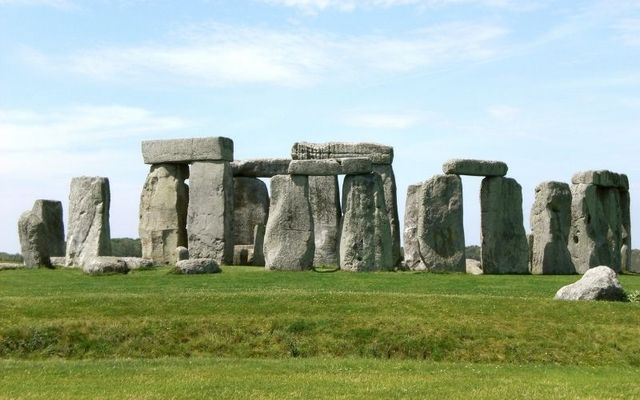 Stonehenge is one of the most famous prehistoric sites in the world. Wikimedia Commons/Operarius

An Irish heatwave in 2018 led to the discovery of a large circular enclosure near the famous ancient site, Newgrange, in County Meath.

The circle was found by Anthony Murphy, founder of Mythical Ireland, who used drones around the Brú na Bóinne area to take photos on July 10, 2018. It is said that the potentially 4,500-year-old circle was uncovered because of the dry weather conditions.

Murphy highlighted that it was revealed because post holes and pits in the ground held moisture better than the surrounding soil, so the circular formation appeared greener.

“This is a once in a lifetime kind of thing… To say I was absolutely gobsmacked, amazed and delighted is an understatement,” Murphy told The Journal.

Thanks to the recent heatwave, a concealed henge has been discovered close to Newgrange at the UNESCO World Heritage Site of Brú na Bóinne, County Meath! #IrelandsAncientEasthttps://t.co/mcaEjQcTtV pic.twitter.com/AIAx9YuCvx

“If these turn out to be substantial discoveries, then I would be nothing short of utterly elated, chuffed and excited.”

Murphy added that the weather was crucial to the discovery: “I have flown a drone over the Boyne Valley regularly and have never seen this.”

The heatwave is believed to have led to the discovery of a possible henge close to Newgrange in Co Meath. It's thought it could have been built 500 years after Newgrange, which dates from 3,000 BC. | https://t.co/1BMuh05WNX pic.twitter.com/Fsw6ozmcmF

Newgrange dates from approximately 3,000 BC, but this new find could have been constructed 500 years after the UNESCO World Heritage site.

The Irish Department of Culture, Heritage and the Gaeltacht has described the uncovering of the 656-foot wide circle as “a very significant find”.

“When the crop is harvested all surface traces of this monument will vanish and we may not see this monument again for two or three decades depending on when we get another prolonged dry spell like this.”

One archaeologist, Dr. Geraldine Stout, indicated that this find could be indicative of a much larger sacred landscape full of numerous facilities for ancient pilgrims to Newgrange.

“Generally we believe these henge monuments were built up to 500 years after the main use of Newgrange and in a lot of cases they actually enclose the area of monuments.”

Currently, the public is not permitted to access the site as it is in a privately-owned location.