“Darkness is over” - Celtic Bealtaine celebrated in Ireland with ancient ceremony

The Bealtaine Fire Festival is a yearly tradition that celebrates the arrival of summer and is a symbol of the re-birth of the land after the long winter months. 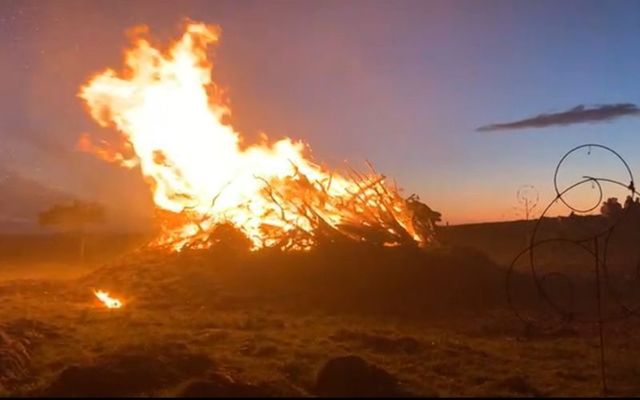 The fire lighting at the sacred ceremonial site of the Hill of Uisneach in County Westmeath this week marked the beginning of summer.

In ancient times, people would gather on the Hill of Uisneach to witness the fire being lit by the High King of Ireland, and was seen as a symbol of the re-birth of the land after the long winter months.

The Bealtaine Fire Festival (which translates in Irish as "May Fire Festival") was revived on the Hill of Uisneach in 2009 and since then it has been lighting the hillside welcoming thousands of people in a spectacular blaze of fire, music, and performances.

Last year in 2020, the fire was lit on the hill with only the Keeper of the Hill and his family in attendance. Once again members of the public were not allowed to attend this year's event, although it was live-streamed to audiences around the globe.

Fire spinner Helen Tooke at the lighting of the Bealtaine Fire at the Hill of Uisneach in Co Westmeath this evening. Tonight’s festival - with no public present - celebrated ’Unity’ - “keeping each other safe and remembering those we have lost over the past year.” pic.twitter.com/XHB4Mk0eWJ

Surviving monuments and relics on the hill date from the Neolithic and Bronze Ages. There is no definitive translation of the word Uisneach as it likely predates the Irish language but likely translates as "place of the hearth" or "angular place”, indicating a temple or ceremonial sanctuary.

In 2017, the ceremonial fire was lit by the President of Ireland, Michael D Higgins; the first Irish Head of State in over a thousand years to do so.

Speaking to RTÉ, David Clarke, Keeper of the Hill, said: "Unity and hope are the important messages coming from this year's Bealtaine Fire.

"Hopefully, we are coming out of lockdown and summer brings a much brighter future.

"We are celebrating keeping each other safe, as well as remembering those we have lost over the past year."

Check out below what you would usually expect from the celebrations at the Bealtaine Fire Festival on the Hill of Uisneach: