Bealtaine- A visit to the heart of Ireland, the Hill of Uisneach

The Hill of Uisneach, the ancient spiritual heart of Ireland, has yet to be discovered by most Irish people - not to mind tourists. 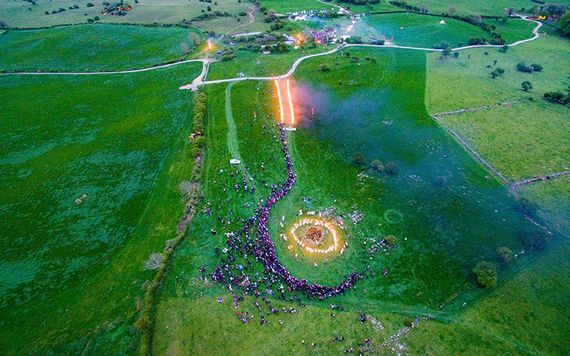 Tribal people from North America, Australia, Tibet, and Egypt have made pilgrimages to this sacred site and yet Irish people have only become aware of its significance with the advent of guided tours over the past two years or so.

Located on a working farm which changed hands 16 years ago, the hill was virtually forgotten about throughout most of the 20th century, and yet it arguably has a significance that surpasses the 5,000-year-old Stone Age tomb at Newgrange.

The landowners, David and Angela Clarke, and a small, committed team began to facilitate guided tours two years ago. I was lucky enough to experience the spectacular views and wonderful energy around this Co. Westmeath hilltop during a recent visit.

Our two hour tour was made all the more entertaining by the story-telling of local guide, Marty Mulligan, who is known as a bit of a legend around Mullingar.

“Chief Looking Horse knew about the significance of this place, which is also known as the ‘Navel of Ireland’, long before he came here,” says Marty. “Many native people come here on a spiritual journey. Uisneach is as significant to them as Standing Rock in the USA or Uluru in Australia.”

Another guide, Justin Moffatt, tells me that interest in Uisneach grew after locals revived the ancient Bealtaine fire festival at the site six years ago.

Guided tours of the Hill of Uisneach will take place every Wednesday to Sunday from May 1. Tours commence from the public car park at 1 pm. To book a tour in advance, please check out the website www.uisneach.ie. Please note that the sacred site is not open to the public at other times.