Dingle's Féile na Bealtaine gets creative in bringing people together

Féile na Bealtaine, which is based on the pagan festival celebrating the arrival of summer, started in Dingle, County Kerry in 1995. 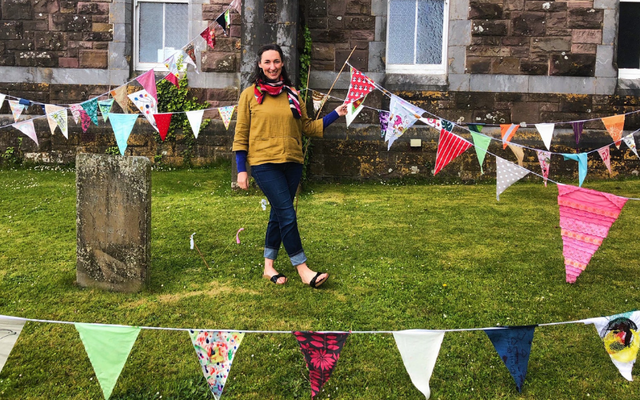 Dingle's annual cultural event is back this year and it's found an alternative way to connect the community together with their project Ar Scáth a Chéile.

Based on the pagan festival celebrating the arrival of summer, Féile na Bealtaine was set up in Dingle, County Kerry in 1995 and began as a modest weekend of poetry, drama and street theatre.

Since then Féile na Bealtaine, which translated from Irish means “Festival of May”, has grown into a five-day cultural extravaganza each May Bank Holiday.

Speaking to IrishCentral, organizer Peader Ó Fionnáin, son of Dr. Mícheál Ó Fionnáin the original founder of the event, describes it as “a bilingual, community inspired festival that has its roots in the varied interests of our very diverse population.”

Last year the streets of Dingle were quiet on what should have been the event’s 25th year and as Peader describes it,  “only a solitary fire burning on a hilltop over the town marked the coming of summer.” 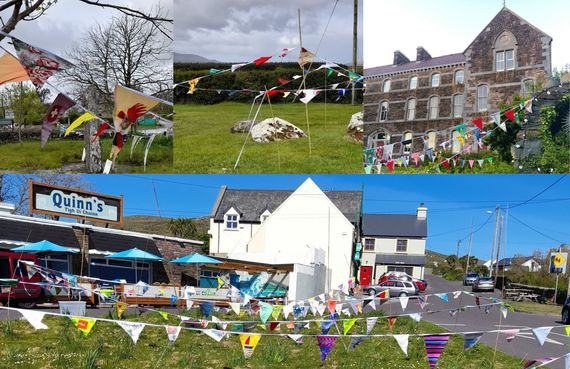 The different locations of the flags for the Scáth le Chéile project. Deirdre McKenna Twitter

This year the committee was passionate about not putting the festival behind an online screen and instead wanted to create ways to make it feel alive in the community while also staying safe. “We will mark the usual weekend with a number of well-tended outbreaks of creative fire that will not gather crowds. Art on windows, poetry in the supermarkets, video boards flashing brief images of original art, or short videos that will remind us what it was like to celebrate Feile together,” explains Peader.

One such ‘creative fire’ that was lit was an idea to ask people within the community to design a flag as part of a bunting project called Ar Scáth a Chéile. The name is a shortened version of the Irish saying “ar scáth a chéile a mhaireann na daoine,” which translates literally as “people live in each other’s shadows.” Meaning, we are shielded from the sun by each other, we rely on each other for shelter.

Hundreds of flags were left at various drop-off points around the area and visual artist Deirdre McKenna took on the challenge of sewing the flags together to create a mesmerizing decorative bunting.

Deirdre became involved in the project due to her long-running history and connection with the festival, "some of my earliest exhibitions were at Féile na Bealtaine. It was a great start for me straight out of art college. Over the years I have exhibited in many shows, solo, and group projects as part of the Féile na Bealtaine program.”

The ideas for the flags were born from a desire to create an interactive project to make people feel involved. Deirdre wanted to think of something that was accessible to people at home and figured that everyone would be able to find a bit of material, an old shirt or bed sheets that could be cut up to make small flags. And as she puts it “what says festival better than bunting?”

“For some it's a way of spending a few hours engaged in an activity, giving them a purpose, for others, it's a prayer of hope and imagining better days ahead. There are memories, playfulness, and community. All the local schools have pitched in as well as a number of schools from around the country who have sent flags in the post. I have even received flags from Switzerland and the US."

Wandering around the peninsula it's hard to miss the brightly colored flags dancing in the breeze. Reading the poems scrawled on them, the personal messages or the names carefully printed across the fabric, there is a beautiful message in the air that no matter what we can always find a way to be connected.