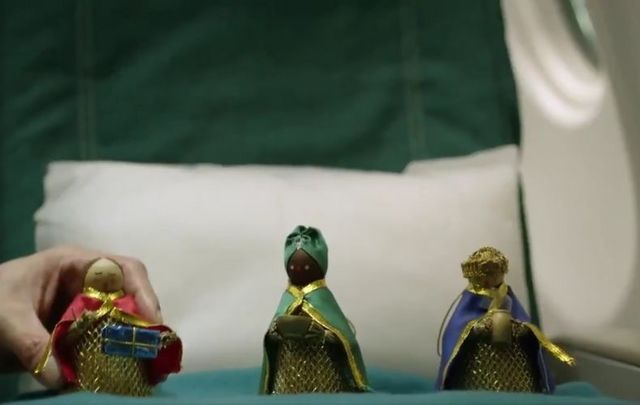 Irish airline Aer Lingus has delivered some very special Christmas memories to three Irish ex-pats unable to return home this December due to the coronavirus pandemic.

An Aer Lingus crewmember personally delivered personal Christmas decorations, like a childhood stocking or a special Christmas tree decoration, to Irish emigrants in New York, Paris, and Brighton to help make their Christmas special in the most difficult of circumstances in a heartwarming video.

The three emigrants were also gifted airline tickets to enable their return home when it is safe to do so.

In Brighton, Aer Lingus surprised Andrew, who could not fly home to be the best man at his brother Paul's wedding in October, with his childhood Christmas stocking.

"Andrew was my best man. He was supposed to come home for it [the wedding], but it didn't happen," Andrew's brother Paul said in the video.

Paul and his mother sent Andrew his childhood stocking to celebrate an annual tradition of using the same stocking at Christmas, while his mother delivered the most typical Irish mammy warning possible.

Meanwhile, Natalie, who is living in New York, was also surprised with a nostalgic decoration from home. Natalie has been living in New York for 25 years and had never missed a Christmas in Ireland until this year and her sister Gemma wanted to remind her of home by sending her the Three Wise Men.

Finally, Cormac, who is based in Paris, was sent a little piece of home in the form of an angel he made in kindergarten. His mother Trisha and sister Fionnuala sent him the decoration, which has been placed on top of the family's Christmas tree every year. as a reminder of Ireland at Christmastime.