For St. Patrick's Day, an Irish man's message of thanks to America

"Give me your tired, your poor, your huddled masses, yearning to be free"...and so they went. 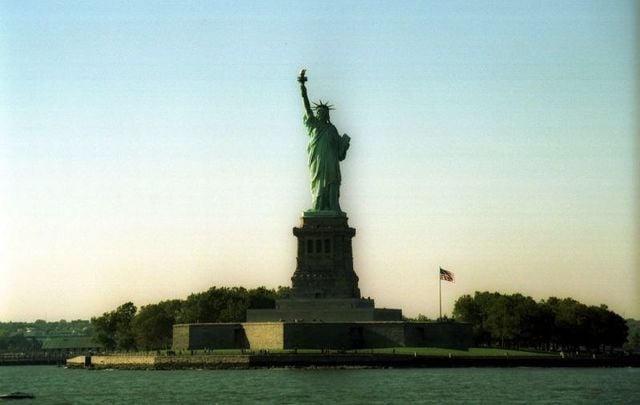 Statue of Liberty in the New York harbour - just as welcoming as it was the time it was seen by millions of Irish immigrants arriving to the US. RollingNews.ie

An emotional Irishman says thank you to America on Saint Patrick's Day for giving all those poor people - the brave immigrants of the days past - a home and a hope for a better future.

Editor's Note: The article below was published in 2013.

As a rule, Irishmen only cry at football games. But a walk around New York City can do strange things to a man.

I confess to some tears at the birth of my son. My eyes may have moistened somewhat as my wife said the words, "I do;" but I maintain this was just the uncomfortable rental suit.

Nothing, however, prepared me for what happened in New York City one fine spring morning. Let me tell you how I ended up publicly emoting in NYC, with nary a football insight.

On a short visit to New York, my wife and I wandered down Manhattan, past Fire Department stations, bastions of old Irish America. We saw the names of those who had so bravely rushed into the Twin Towers inscribed on lovingly tended memorials: O'Callaghans and Sullivans alongside Garbarinis and Weinbergs. Pictures of handsome, smiling faces with stark words underneath:

Silence and sadness at St Paul's Chapel overlooking Ground Zero. On we walked, reverentially, past the gaping void of the World Trade Center.

Then, I saw a mirage. There, in the middle of downtown Manhattan, was a springtime Irish hillside, complete with a tumbledown stone cottage, bracken, and grasses. The purple foxgloves were even in flower, just as at our own Irish farmhouse, which we had left only the day before. Glass skyscrapers towered incongruously on either side. I approached cautiously. Was this surreal hallucination the effect of jet lag, or maybe an after-effect of last night's beers?

My tentative hand met cold stone, confirming that it was real: In the middle of Manhattan, there is a tiny park, the Irish Hunger Memorial. A ruined emigrant's cottage transported from County Mayo stands amid wildflowers and stones from each county of Ireland. Carved in black marble are texts that vividly describe the Great Famine of 1847 and the exodus that followed. As many as one and a half million died, and two million more fled the worst apocalypse of 19th century Europe. Here, on these very quaysides in New York City, many found shelter.

Stunned by this unexpected pathos we walked slowly, like the bereaved, toward the Hudson River. Then, turning a corner, there it was: the Statue of Liberty stood graceful in the blue distance. This immense figure was the first sight seen by millions of Irish immigrants who had never before beheld a structure more than thirty feet tall. Yet here, after many hard weeks at sea, they were met by a benevolent colossus which proclaimed that salvation was at hand and that a new future free of tyranny and poverty was possible. 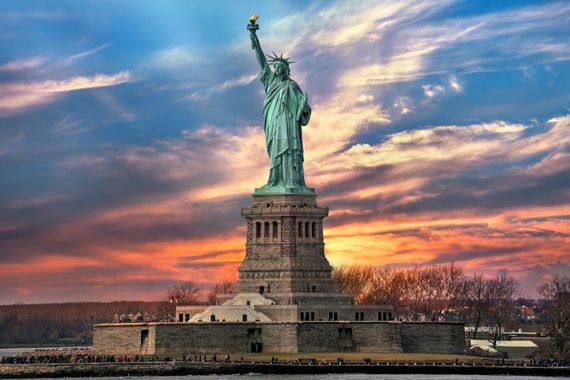 The Statue of Liberty (Getty Images)

That's when it happened. I was drowned in a wave of emotion. At first, I struggled to identify this overwhelming emotion. It was more than mere sadness, but what was it?

As my wife and I embraced, all around us pulsed this extraordinary nation: a vast new country that has given millions of the Earth's poor a new life. Then I recognized what this overpowering feeling was: gratitude. Tears of pure gratitude for all of them, the Irish, and all the other peoples: a million human dramas unknown, all swept up from despair into the arms of America.

I looked at the skyscrapers, the blue Hudson, and the friendly people walking by. In the ether within and behind this complex nation lies the golden soul of the improbable proposition that is America. And so I whispered to it, to the quiet soul of America, as though it just might hear me: "thank you."

Thank you for giving those poor people a home. Those immigrants beat impossible odds and survived unbearable hardships. This triumph of the human spirit was only possible because America opened its arms to them and offered freely a new home where from of the black pits of despair, their futures shone brightly.

"Give me your tired, your poor, your huddled masses, yearning to be free."

Perhaps too it gives us pause for thought, and asks us to remember today's poor and dispossessed, both in the forgotten corners of the world and in our own neighborhoods. But think of them and look beyond mere pity: remember the vast potential of the wretchedly poor:

In the nineteenth century, the masses of destitute Irish were thought of as a hopeless burden on society. Yet by the 1960s they had risen to become one of the most powerful, industrious, creative and wealthy ethnic groups in the United States. JFK, Henry Ford, F Scott Fitzgerald, and millions more besides, changed the world for the better through hard work and sheer genius. The same potential lies within impoverished people everywhere, just waiting to be unlocked.

Perhaps on St. Patrick's Day too, America's enemies might pause from their hatred and plotting and consider that, contrary to their dogma, America at its best does not trample or oppress the poor, but raises them up to freedom, dignity, and prosperity. Everyone: black or white, Jewish, Christian or Muslim.

Look today, at the White House, where Barack Obama will thank Ireland for its contribution to America. But few think to thank America. America suffers from a deficit of gratitude. No matter what it does, there are many in Europe keen to mock and deride America.

I'd like to hope that Ireland can be an exception to the rule of European cynicism and ingratitude toward our close friend, the United States. So, as an ordinary Irishman, today I'd like to say this to the ethereal but very real thing that is America: Happy St Patrick's Day and, above all, thank you.

Rory Fitzgerald is a lawyer and journalist who lives in Cork.